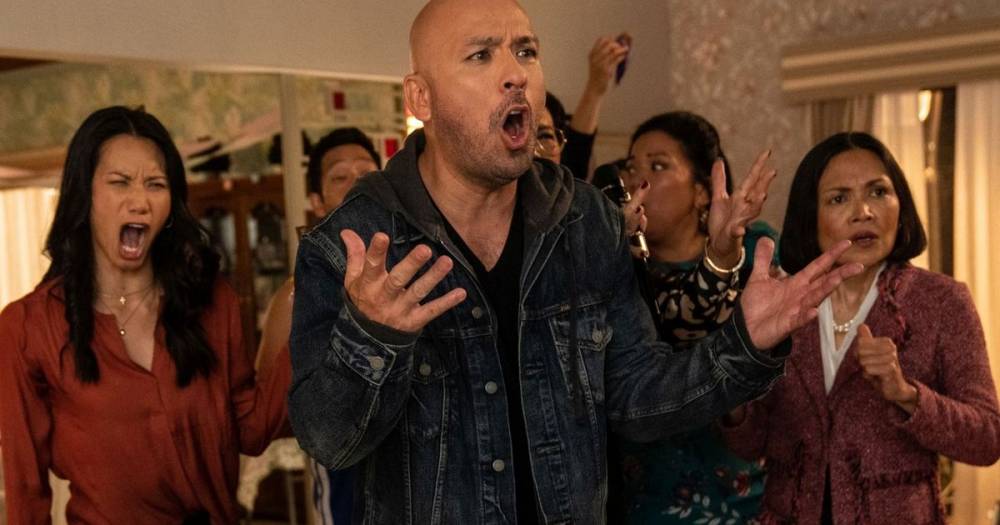 If I had to guess, comedian Jo Koy and director Jay Chandrasekhar have a mission to bring back the mid-aughts comedy. You know the type: a predictable set-up where the goal is solely to let the star vamp with an ending that’s all heart, no brain. It’s a genre that reached its peak with Adam Sandler’s Grown Ups. The duo has released a new family comedy, Easter Sunday, meant to draw in the family-based audiences that have made My Big Fat Greek Wedding and Crazy Rich Asians major hits.

However, there’s a major difference between those classic comedies and Easter Sunday: humor. For while the family commentary occasionally works in this already-dated outing, the story – not to mention Koy’s performance – never lives up to the potential of its supporting players.

Joe Valencia (Koy) is a struggling comedian living in L.A. While he’s had some success with stand-up shows and a thoroughly-mocked beer commercial, he’s still looking for that big break. After bombing an audition where he’s expected to perform with a stereotypically Filipino accent, Joe gets a call from his family back in Daly City: his mother (Lydia Gaston) and Tita Teresa (that’s “aunt,” played by Tia Carrere) are in a huge fight, and refuse to speak to each other.

Because Joe’s the only one who’s managed to keep the family together over the years, he has to come home for Easter Sunday and help restore the peace. So, with his reluctant son Junior (I don’t know his real name, they never say it, but he’s played by Brandon Wardell), Joe makes the drive to Daly City to deal with the fights, the awkwardness, and a series of dangerous hijinks at the hands of his well-meaning, but ill-guided cousin Eugene (Eugene Cordero).

There is little in Easter Sunday’s plot that will surprise you. In fact, if you’ve seen any Adam Sandler movie in the last fifteen years, you can likely guess where every beat of the plot is going. A near-perfect protagonist who can do no wrong has to implant himself into a world – here involving family members – that gets wackier and wackier with each passing minute. There’s a loosely connected plot about family, designed to treacly draw tears before the end, that mostly functions as a way for actors to deliver clearly-improvised jokes and forced punchlines.

Chandrasekhar gives us this plot boiled down to its most basic roots. Every story beat is predictable, whether it’s the fighting moms, the son who wants his dad to spend more time with him, or the presence of a gang that flashes their gun the exact same way as the brutal SNL “Bad Boys” sketch from 2014. And if you’re wondering if everything is made hunky-dory with a big karaoke number, you would be correct. It’s all slapped together with the most haphazard editing I’ve ever seen in a big-budget comedy – most of the scenes feature a cut per second, all opposite a clearly CGI background.

This would be easier to ignore if the jokes landed in any significant way. In fact, for most of the first half of the film, the only real laughs come from footage of Koy’s real-life stand-up. After that, it’s a long time before anything makes you laugh again. Oh, there are clever setups, to be sure. There’s a creepy Santo Niño doll that seemingly follows Joe around the house. Mother Susan is seen deliberately eating a Cliff bar to protest her sister’s luncheon. The most famous Filipino actor is referenced with a series of clever jokes – and even a cameo. And I certainly smiled at the delivery of the line “Our people have survived the Japanese, the Americans, and Bitcoin.”

But otherwise, the only laughs come from Tiffany Haddish, who has a brief cameo in the film that would be a great reveal if the film didn’t give her top billing and feature her prominently in advertising. Haddish is a true-blue movie star, coming in and stealing the film in a way only the best comics are capable. Her jokes (which I assume are improvisations, because they are very much funnier than the rest of the script) elicit laughs more than anything else, and she serves as a bright spot in the middle of the production.

Of course, what Haddish also amplifies is that the film’s star, Jo Koy, does not possess that magic ingredient that breeds movie stars. I wouldn’t say that Koy isn’t funny – he clearly has an audience, as he’s one of the most successful touring comedians in the world (similar to how the highest-grossing comedian right now is actually Gabriel Iglesias, although people don’t readily know it). No, Koy’s problem is he can’t act. He doesn’t deliver punchlines in a realistic way, he treats his costars as actors, not characters, and he has no understanding of the camera.

It doesn’t help that the script – which is credited to Ken Cheng and Kate Angelo, but seems to be drawn directly from and for Koy’s stand-up – clearly views Joe, and therefore the real Jo, as perfect in every conceivable way. He is good and right about everything – he’s always smarter than his family, he always makes the best acting choices and knows what’s best for the industry, and even when he’s clearly in the wrong, the other characters have to apologize to him. Hell, at one point, the reverend lets him perform the homily, just because he’s so good at everything. It’s self-serving, and when juxtaposed with Koy’s lack of connection to the craft, it stands out all the more.

I will say, however, that as much as I disliked the screenplay, directing, and Koy as an actor, I did enjoy almost everyone else in the film. Ok, that’s not exactly true. I haven’t been able to figure out Wardell yet, who is so weird in the role. Wardell is a popular comedian known for his sarcastic, disaffected style. Some might call his acting here “bad,” others might call it “sardonic.” Either way, it makes for an odd choice as the film’s second lead with the biggest emotional arc. Wardell nails the eye roll, but the rest of his choices are so baffling that the fact he’s a 27-year-old playing a 16-year-old isn’t even the least believable thing about him.

Yet everyone else shines without hesitation. Eugene Cordero, aka Pillboi from The Good Place, is the film’s secret weapon, often having to carry scenes on Koy’s behalf. Meanwhile, Gaston and Carrere (the popular General Hosptial star) are far more interesting than any other performers in the film – I enjoyed most of their interactions). Elena Juacto is in about three scenes max as Joe’s sister Regina, and honestly, I would have rather followed her for the film’s runtime. And Broadway star Eva Noblezada has a chance at career cross-over – she’s so charismatic she makes the film’s worst dialogue sound realistic.

Oh, I should mention that there’s a handful of cameos from comedians that, while not always bad, are usually just weird. Jimmy O. Yang, from Silicon Valley and Crazy Rich Asians, doesn’t fit this universe in any way, shape, or form, but it’s nice to have someone for a few minutes who understands how to make comedy work in the cinematic language. Experimental comedian Connor O’Malley shows up in a brief cameo, mostly just to confuse the 1% of audience goers who know who the hell Connor O’Malley is. And Jay Chandrasekhar cameos as Joe’s agent, and he…well, he’s just bad. Let’s not beat around the bush. Not a surprise – he’s never been a great actor.

Easter Sunday isn’t quite the bottom of the barrel, but it’s certainly not one you find at the top of the bin. Halfway through the film’s runtime, I had to double-check that I wasn’t at home watching TBS on a Sunday afternoon. The cast is talented enough to give you a few chuckles; Haddish alone should provide a few more. But don’t expect much from Chandrasekhar’s newest family comedy. And I wouldn’t place any bets on Koy becoming the next comedic acting superstar.