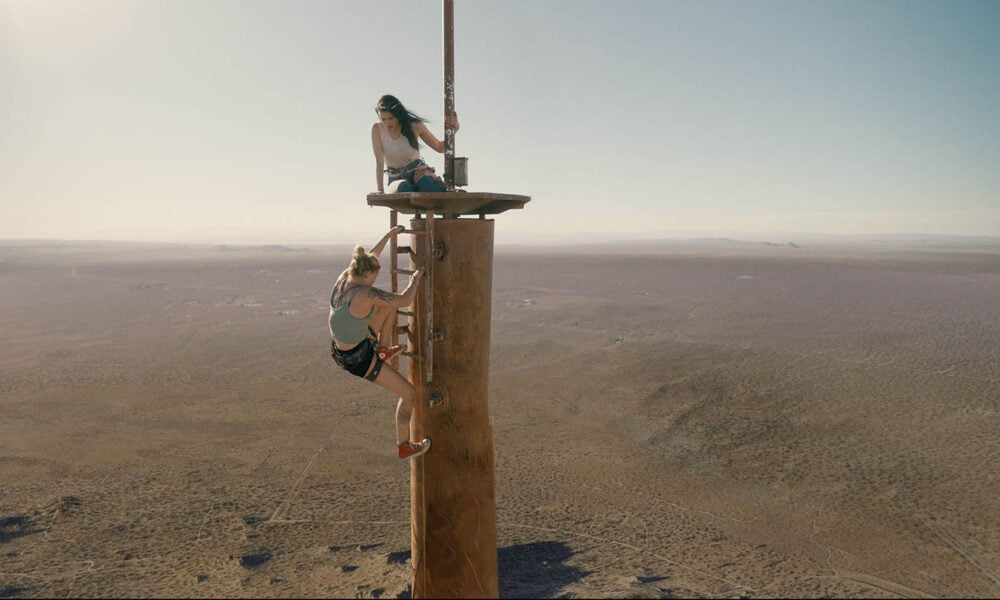 In spite of Top Gun: Maverick and Elvis’ zeitgeisty domination, the summer of 2022 has been mostly disappointing in terms of its blockbuster fare. We’ve seen dinosaurs haphazardly clomp around,  Norse gods crack jokes to distract us from a lack of plot, space rangers bore us to tears, and would-be assassins roam around on trains. None of them have been particularly memorable or interesting.

So let this be a lesson to filmmakers everywhere: sometimes, the simplest story and the simplest setup are all you need for a great film. For Scott Mann’s Fall is the most thrilling, best-acted, and most impressively executed thriller this summer not involving Tom Cruise in a cockpit. It is a perfect throwback to the Hitchcockian setup, delivering tension, terror, and thrills for its entire 100-minute runtime.

In an effort to break her friend from her funk, Hunter invites Becky on a simple, yet attention-seeking climb up a decommissioned TV tower, from which she can scatter Dan’s ashes. Becky reluctantly agrees. This soon turns out to be a mistake, as the climb shakes loose the rusty screws holding the ladder in place, and leaving the women trapped 2,000 feet in the air without cell phone service on a platform no bigger than a pizza plate. Running out of time, the best friends must find a way to get down before they run out of food or water.

Fall works because it builds its thrills around a very human story about survival. In a lot of ways, it’s reminiscent of The Descent, the perfect 2005 monster-survival film about trying to survive when overwhelming grief threatens to kill you (as do, you know, monsters). Yet here, the only threat needed is the universal fear of falling from a great height. The film terrifies you through its simplicity: there are no outright stupid decisions, no convoluted scenarios. Just little things that slowly go wrong and suddenly threaten your very existence.

Mann conveys the sense of fear and outright survival through the nitty-gritty details of the scenario. Becky and Hunter must work out how to stay hydrated, how to relieve themselves, and beyond. More importantly, they have to figure out MacGyver-esque solutions to their deadly predicament. Hair ties and harnesses are used to lower phones to a distance from which a 911 Instagram post can be shared. When that doesn’t work, they have to cradle the phone in shoes, socks, and padded bras, in order to hurl the phone from shattering heights in order to send help. The solutions – and their complications – each elevate the film above its competition through brains and execution.

Yet the narrative is not what keeps us invested in Fall. No, what keeps us invested is the care of filmmaking on display. Surprisingly great cinematography from Miguel “MacGregor” Olaso captivates us from the jump. Drone footage and precise geographical layouts help give the scope and anxiety of being thousands of feet above the ground, at perpetual risk of death. It doesn’t have to be aggressive with its gimmicks, because the setup is the gimmick. Smart editing hides the film’s surprises, and so much can be conveyed with a simple cut from a circling vulture to a gaping leg wound. Mann has complete control of his set, and it shows in every frame.

Small independent horror/thriller films live and die on the strength of their actors, and Fall is far from the exception. Mann wisely utilizes two incredibly talented, but mostly unknown actresses, giving them the leeway to act their asses off in the hopes of launching successful careers (one can hope). As protagonist Becky, Curry gives a commanding performance, going the emotional gamut from distraught to determined over the course of 100 minutes. Meanwhile, Virginia Gardner – a standout in 2018’s Halloween reboot – is fantastic as adrenaline junkie influencer Hunter. It’s a role that would be obnoxious if not in deft hands, and Gardner is a master on the rise. Oh, and while he doesn’t have much to do, Jeffrey Dean Morgan shows up as Becky’s father, just to remind you how good an actor he can be.

Fall is cinema at its very best. It’s a simple, taut adrenaline rush, taking you on an emotional roller coaster and delivering on every promise – emotionally, dramatically, and adrenally. Films like this are a diamond in the rough, an example that the best movies can come from the simplest of circumstances. And if the future of cinema lives in the hands of young creators like Mann and Curry and Gardner, then the future of cinema – and especially thrilling cinema – remains in the best of hands.

Fall is now available to rent on VOD