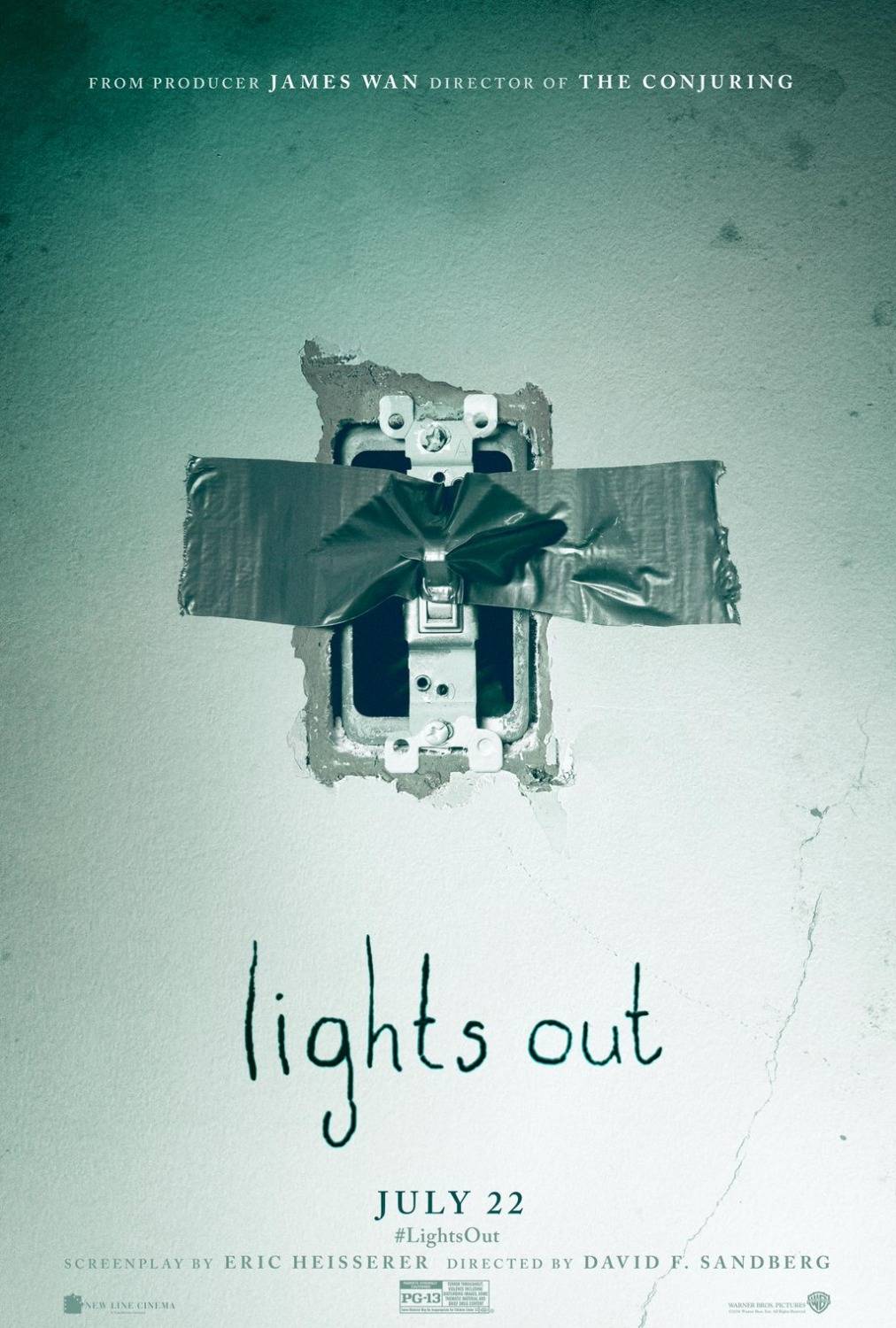 Is a third act enough to redeem an entire movie? That’s the question that many audience members will inevitably be asking themselves after seeing Lights Out. Directed by David F. Sandberg, and based on his own (honestly quite creepy) short of the same name, the newest horror film from the James Wan collection tries to feed off of the oldest human fear: the dark. Sandberg knows exactly how he wants to play off our most primal fears-a mixture of real-life issues and practical effects-but while he manages to utilize these techniques by the time he reaches the finale, we are subjected to a bland, generic, and, in its worst moments, offensive journey along the way. So while the final third of this movie provides the perfect mixture of thrills and scares, there’s just not enough here to make this a good film.

The film follows Rebecca, a young rocker played blandly by Theresa Palmer. Due to a strained relationship with her mother and the disappearance of her father, Rebecca left home when she was 18, vowing never to return, and has trouble connecting with people. She won’t even let the boy she’s been sleeping with for months stay overnight, or even claim the moniker of “boyfriend.” However, she returns home when her little brother’s school calls to reveal that young Martin (Gabriel Bateman) has been falling asleep in class. When Rebecca picks him up, he reveals his fears of their depression-ridden mother’s “friend,” Diana, which drags Rebecca back into a world she has longed to escape. You see, Diana is a ghost feeding off mother Sophie’s (Mario Bello) depression, and while she cannot be seen or do harm in the light, once things go dark, she comes out to hurt you. The children must find a way to defeat Diana and save their mother, who has become convinced that Diana is the only person who loves her and will do anything to save her demonic friend.

My biggest issue with the film is its treatment of depression. I have previously beaten the drum for the importance of metaphors in the horror genre. The best films are never really about scary demons or serial killers-they are about taking real life issues and demonstrating them in bizarre and twisted ways. The Silence of the Lambs is about feminism, The Exorcist is about faith, Halloween is about suburbia and It Follows is about human sexuality. And Lights Out actually understands this idea and tries to build off of it. Which is great! That’s exactly what I’m looking for. The problem is the way it tackles these issues. You see, Lights Out wants to serve as a metaphor for depression. Diana is supposed to be a metaphor for the monster that lives in Sophie’s mind, the effect it has on her family and relationships, and the curse that she has passed on to her children. However, while this could be fodder for a truly great horror film (The Babadook actually played in this sandbox fairly recently), Sandberg’s interpretation comes off as fairly tasteless in the end. It portrays Sophie as a borderline schizophrenic who is willing to put her family in harm’s way just so she can feel good again, which is such a strange interpretation I’m not even sure I can call it a stereotype. Sure, there’s some powerful moments that could have made this plotline work, such as the implication that Rebecca has depression too, as evidenced by the self-inflicted cuts on her arms shown in the first five minutes and then ignored throughout, but they never come together in a coherent or helpful way. And if the message of this movie is the effect depression has on your loved ones, then the final scene is a straight up slap to the face to anyone who has ever suffered anxiety and depression. I won’t spoil it here, in case you are interested in seeing the film, but imagine the absolute wrong message to send to someone with depression, and that’s how the film decides to defeat Diana.

Speaking of Diana, she poses another problem for the film. Specifically, Diana as a creature lacks a specific set of rules. Let me explain using the Creature from It Follows: “It” has the ability to appear in any shape it pleases, and “It” remains invisible to anyone who hasn’t been cursed, but “It” must travel at a slow, meandering pace during the entirety of the chase. It’s a simple set of rules, but it makes all the difference in understanding what we’re afraid of. In Lights Out, Diana is all over the map. She cannot experience light, as it burns her skin, but she can still travel across town in broad daylight. She can’t attack you when illuminated, but she has the capability to put out flames and cut the power to the house. And while neon light makes her disappear, black light makes her reappear. I’m not asking for anything complicated in explaining Diana’s dark powers, but a general sense of consistency would be greatly appreciated.

However, when the film commits to its scares, it commits. The opening scene is a near-remake of the original short film, except relocated to a mannequin factory, and is still just as frightening as the short. But it is the finale that really ups the ante for horror films. With all the characters trapped under one roof, Diana decides to cut the power to the entire street (which, again, is apparently one of her powers that is completely unexplained). For the final twenty minutes or so of the film, the set is left in pitch-blackness. The only lighting the actors have throughout the rest of the film are whatever sources of illumination they can muster: candles, flashlights, black lights, cell phones and, in one legitimately humorous scene, a truck’s headlights. The use of lighting in this scene is incredibly well done, demonstrating a strong directorial sense and creating legitimate tension for the final twenty minutes. It is a master class in horror filmmaking.

As for the acting, the cast does what it can with such stereotypical roles. As mentioned before, Palmer is completely bland in a role that has been seen a thousand times (and better). Bateman is fine as a child actor, in that he never got too cute or too unbearable that he ruined the film. If the film has anything close to a breakout star, it’s Alexander DiPersia as Bret, Rebecca’s sex buddy, who takes the most two dimensional character around and gives him a sense of relatability and level-headedness. But the real star of the film is Ms. Bello. While Sophie is an amalgamation of stereotypes and offensive clichés of a depressed person, Bello gives her heart, never betraying the character, and never allowing the stereotypes to bring her down. If only the script hadn’t treated her character so horrifically, she could have had a chance at a real performance.

So that’s Lights Out. It has a nice beginning and a killer ending, but is it all worth it? I say no. I’m not ready to give this film the death blow-as I said, those jumps are earned and there’s some really strong acting and direction in certain areas. However, I would stick to catching those great bits on television in the near future, and leave this film in the dark for the time being.

Oh, and one more important thing to note: every major scare in the film is spoiled in the trailer. Every. Single. One. So allow me to take this opportunity to tell you all not to waste your time on trailers. Because in our current society, once you see the trailer, there’s really no point in seeing the movie.