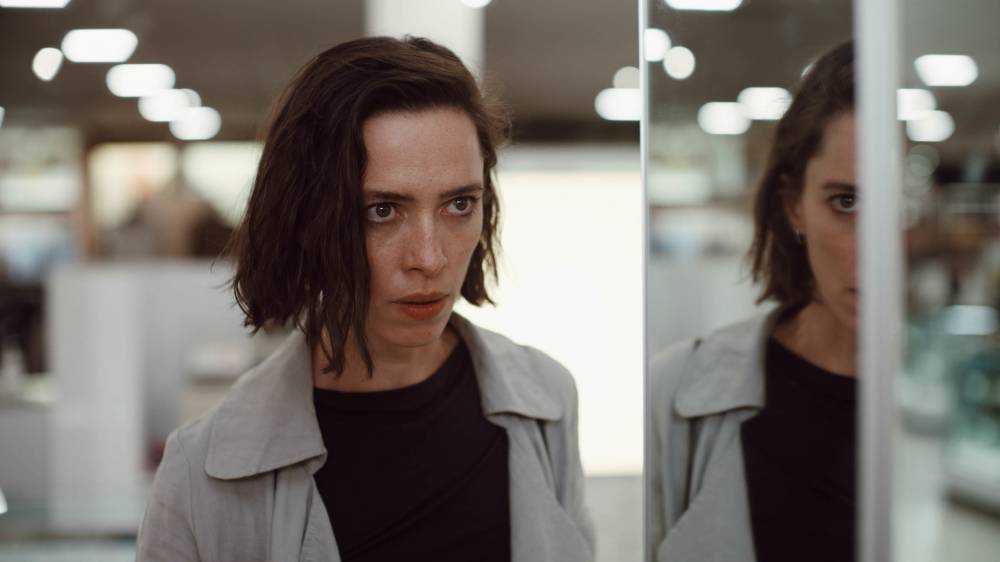 Sometimes a film lives and dies by the motto “Go Big or Go Home.” Such is the case with Resurrection, the debut film by Andrew Semans. Resurrection is a dark, intense film that blends the psychological thriller and real-world dilemmas with a dash of supernatural horror, building to a left-field climax that will leave many unsettled. Make of that ending what you will, but there’s no denying that everything that comes before it – and indeed, even during – is some bravura, if never wholly original, filmmaking at its finest.

Margaret (Rebecca Hall) is an uptight, hardworking executive living her best life. She’s not perfect – she’s having an affair with her married coworker – but she’s good at her job, and she loves her daughter, Abbie (Grace Kaufman), and that’s enough. However, one day, while at the department store with Abbie, Margaret notices a face from her past: that of David (Tim Roth), the ex-husband she fled from years before, who held a twisted sort of power over her and made her life a living hell. David is back to dominate her once again, and Margaret finds herself in a position where she must be willing to do anything to keep herself and her daughter safe.

Resurrection sucks you in from the very jump because Semans is confident in how he wants to tell this story. He firmly places the characters in the world of the real, facing real-life traumas and stories and stakes before even dreaming of introducing the fantastical or macabre. He lets each domino fall into place in precise order, slowly drawing you in before you realize how invested you’ve become. He introduces us to complex, yet relatable characters – Margaret, Abbie, Margaret’s naïve new assistant Gwyn (Angela Wong Carbone), then explores how this world crumbles with the introduction of one agent of chaos and destruction.

At first, while we know that David is a Bad Dude, the extent of his crimes is hidden from us. And then, in one sweeping monologue, Semans and Hall fill us in, chilling us to the bone. Now, I tend to prefer the “show, don’t tell” style of filmmaking – this is a visual medium, after all – but there’s no denying the right choice was made here. Everything we need to know – about Margaret, about David, about Resurrection, and beyond – stems from the film’s central act-one monologue, done in one seven-minute take, as the camera pushes in slowly on Hall’s face.

It’s incredible writing and incredible acting, laying out the extent of the gaslighting, of the grooming and abuse, and beyond, all building to one of the most chilling statements I’ve heard in a long time. Few films could pull off a monologue like this, that so clearly amplify the themes and characters of the film and set a tone for the second half of the movie. I applaud both Semans and Hall for making it work.

Outside of what thematically works, Semans is equally capable of keeping the tension and the thrills high for the film’s 100-minute runtime. He’s crafted an expert film, whether it’s an evocative image, like a burning baby (yeah, it’s as horrific as it sounds), or the mere threat of a violent image; so many films have tried to make their central villains terrifying from the jump, and Resurrectiontells us exactly how frightening Tim Roth’s David is supposed to be when the mere sight of him grocery shopping forces Margaret to rush home, lock the door, and arm herself.

It’s true that the film loses some steam going into the final stretch, but I can’t be too mad at a film that so successfully nails its what-the-f*ck conclusion – one I couldn’t’ spoil if I wanted to. It won’t work for everyone – I’m not even sure it works for myself, if I’m being completely honest. But it’s a bold cinematic choice, the kind we don’t see often enough in Hollywood these days. I’ll take being shocked over complacency any day of the week.

Of course, Resurrection works thanks to the queen that is Rebecca Hall. Hall dominates this film from the very first scene, all in on a dedicated performance – physically, mentally, viscerally, and beyond. I also want to shout out Tim Roth, a wonderful actor who is a creepy foil to Hall’s Margaret. He relishes in the film’s build-up to his big reveal, and an early moment where he denies being the man Margaret knew before taunting her with intimate information, is just excellent villain work. I also want to give a shoutout to Grace Kaufman, who plays Hall’s teen daughter and actually feels like a real teenager, as well as Carbone, who has such an inherent sweetness that makes throwaway Gwyn feel memorable.

Resurrection is a smart, investing thriller that marks an actress in her prime and a director on the rise. While the film does, at times, feel more like a sizzle reel for a filmmaker on the brink of stardom, this will be a terrific building block to grow from. It’s the perfect example of how to do so many cliches correctly and excitingly: how to write a monologue, how to write a villain, how to tackle weighty source material in an interesting way, and ultimately, how to write a thriller. It may not be perfect, but it’s one I’m still thinking about seven months later.

Resurrection is now playing in select theaters; it will be available on VOD tomorrow, August 5th