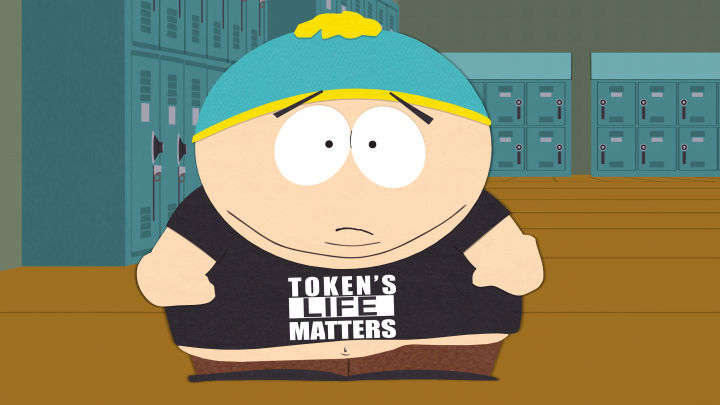 South Park is back for an incredible twentieth season, and it’s just as relevant as ever. In truth, it shouldn’t be that difficult, as the world around us right now is more ridiculous than ever. This is a realization made abundantly clear over the course of the first episode of the season, “Member Berries”: there’s so much that Trey Parker and Matt Stone want to make fun of, that they can’t properly squeeze it all into a 30 minute episode. However, when the jokes land, boy do they land.

The episode opens with South Park’s 4th Grade Volleyball team preparing for their next game. The announcers are eager and the stadium is packed, not because the team is any good, but because they want to see if Nicole, one of the only black children in South Park, will sit down during the National Anthem. Yep, two minutes in and we’re already taking on Colin Kaepernick. As the national anthem plays, it is instead the three white girls (specified by the announcers) who are eventually joined by Nicole. The crowd roars in applause before walking out, leaving the game, disinterested. A funny statement about the interest the media has taken in the protest without actually caring about the reason for protesting, or even the sport itself.

The girls meet with P.C. Principal (who is still one of the best characters in the show’s history) to discuss the reason for the protest. It appears that there’s a troll named SkankHunter42 who has been harassing the girls in the school, and not only do the boys seem uninterested in their harassment, no one is doing anything about the obvious culprit-Eric Cartman. Why not? Because Cartman has positioned himself as a faux-advocate, sporting a “Token’s Life Matters” shirt (the only black character Cartman knows). To the naked eye, he seems as the perfect takedown of Milo Yiannopoulos-a sort of pretend lefty whose goal is to “satirize” them for the right (I put this in quotation marks because Yiannopoulos is not a satirist, no matter what he says, and is more accurately a douche). However, his claims convince the powers that be, and the girls are angered to learn that their plight will once again be ignored.

In Washington, Congress meets to discuss the recent trend of athletes sitting or kneeling during the national anthem. They realize that the anthem, as is, no longer properly reflects the America of today. They realize that they need to “reboot” the anthem, and give it a modern update while making us remember why we loved the original. With these requisites, there’s only one person they can turn to for the job: J.J. Abrams. Meanwhile, back in South Park, Randy is asked to give a poll for voting for president. His options? A Giant Douche and a Turd Sandwich. Yep, Trey and Matt are so turned off by this election they are bringing back their most popular bit. Randy informs them that the house is “staunchly Turd Sandwich,” and is horrified to learn that the Giant Douche is leading in the polls. He gripes about this all night at the dinner table, and Stan becomes cynical once again. He complains that this bit has to return, as he hated it the first time. Specifically, he asks his dad, “Giant Douche and Turd Sandwich? Why are we back to this?” An angry Randy retorts “Cuz we’re Americans! Have some respect!” We then cut to reporters meeting with the Turd Sandwich (the name they use to refer to Hillary Clinton the entire episode) to find out why she is so unpopular. They fail to come up with an answer, and we are treated to Giant Douche headquarters celebrating their lead by dancing to Cake by the Ocean. And who is the Giant Douche, you ask? South Park’s resident Trump stand-in Mr. Garrison, of course (now sporting a very obvious orange spray tan), with his running mate Caitlyn Jenner. As they party about leading in the polls, Garrison begins to come down. You see, he’s only now realized that he has no plan for once he gets in office. He asks Caitlyn for advice, but she’s even more clueless, which frightens Garrison, as she was supposed to be in charge of all foreign and domestic activity (hilarious, and shocking, considering that’s the deal that Trump offered John Kasich back in July). Garrison becomes even more despondent when he is asked, point blank, by Matt Lauer how he plans on following through with his only real stance: f*cking all immigrants and ISIS members to death. Garrison laments his lack of policy, and his climbing in the polls with the most tragically accurate speech in the show’s history: “Why did the Democrats have to nominated such a Turd Sandwich?!? It’s clear I have no plan, but somehow I keep rising in the polls! If I quit the race, I’m a jackass. If I win, I’m a jackass. The only hope we have is if I throw the election.”

Back in South Park, Cartman is trying to draw attention to the plight of the girls, telling everyone “Girls are funny, Ghostbusters is funny, get over it.” He then tries to prove this claim by shoving the microphone in the girls’ faces, telling them to “Make jokes about how fat you are and how many guys you sleep with!” It’s a damning joke about the way we treat women, as well as female comedians (just ask Leslie Jones, who clearly inspired this plotline). Cartman’s actions only serve to infuriate the girls even more, and Kyle takes notice. He consults with Mackey, comparing his guilt over the silence of the boys over the harassment of the girls to the German Collective guilt-he feels shame for letting Cartman gain so much power. When he catches Cartman reading a “rebooted” fairy tale to the kindergarteners (complete with insulting gay and female stereotypes), Kyle decides that he’s had enough, and tells Cartman that he will do everything in his power to bring him down. Cartman tries to win him over the following day by revealing the girls have “attacked him” and “drawn vaginas on his face,” but the school sees right through his lies (mainly because Cartman didn’t realize that vaginas don’t have balls). It is then that Cartman reveals his master plan: the tensions between blacks and whites are at an all time high, and it is inevitable that women will reach that point too, so he may as well fan the flames and get the war started now, while everyone is on equal footing. A horrified Kyle leaves to prepare to stop his arch nemesis.

Randy continues to mope over the state of the General Election when he receives some helpful advice: Member Berries. Essentially, these are grapes that just tell you, over and over again, “’Member Star Wars? ‘Member Chewbacca? ‘Member The Fugitive? ‘Member Ghostbusters? ‘Member?” These grapes serve as medicine to cheer you up in life. Slowly, but surely, it becomes a clear message about the theme of this episode: nostalgia is back in full force because people are so depressed with the state of the world around them, they want to remember a simpler time (incidentally, I’ve been working on an essay about this that I hope to post in the next week or so. Stay tuned). That’s already a funny message, but the show isn’t done there. As Randy is eating his Member Berries, and reminiscing about the good times, the grapes take a dark turn: “’Member when there were no Mexicans? ‘Member when marriage was between a man and a woman? ‘Member when we didn’t have ISIS? ‘Member Reagan?” Suddenly, the grapes are using nostalgia to warp your mind. No longer are the grapes a healthy way to escape the trauma of the present-now they are appealing to a dark racist undertone inside all of us to control us. It’s a vehement takedown of Trump without ever saying his name or invoking his image, and it works 100%.

Speaking of Trump, Mr. Garrison realizes the uphill climb he faces convincing people to vote for Hillary, as everyone he calls hangs up at the mere mention of her name. Horrified at the realization that “Every time I do something awful, people get even more stoked on me,” he realizes there’s only one thing that he can do to piss off the country: he has to protest J.J. Abrams’ new national anthem. Everyone shows up to the big game to hear the new song, including Hillary (“waving to all four of her supporters”) and Mr. Garrison, ready to insult something J.J. Abrams has made. The Anthem starts…and it’s the exact same song. The only change that Abrams has made is that you no longer have to stand for it. You see, if there’s nothing to protest, then no protest can be held. The men are pleased, but Garrison is furious, as are Kaepernick and the girls, who no longer have a way to protest. The episode ends as Kyle plans his takedown of Cartman, only for the camera to pan down the hall to the office of his father, Gerald Broflovski, who pours himself a nice glass of wine, puts on classical music, and logs into his computer’s username: SkankHunter42. A wicked smile creeps across his face as the show cuts to black.

As I said, this is a fine episode. The jokes work, and it sets a great table for the rest of the season. It’s just that they bit off more than they could chew. In one episode, they tried to cover Colin Kaepernick, Leslie Jones, the General Election, J.J. Abrams, reboots, and the dangers of nostalgia. It may not be classic South Park, but it’s smart South Park, and I’ll take that any day of the week.