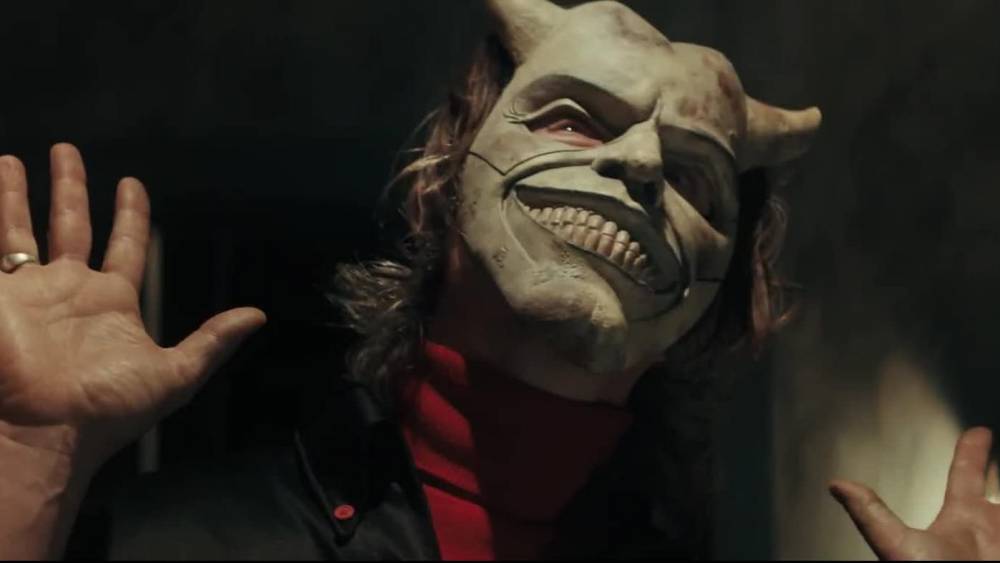 There’s an old adage when it comes to adapting short stories: keep it simple, stupid. Short stories work because of the purity of their vision: no flowery prose, no excessive world-building. Just a great story, get in, get out, boom. However, when adapting these stories to ninety to two-hour films, Hollywood has a tendency to flesh things out – and rarely for the better. Such is the case with The Black Phone, an adaptation of author Joe Hill’s (son of Stephen King) terrific short story. When the film sticks to the terrifying central premise (and Ethan Hawke’s mesmerizing villain), it’s great. Yet there’s about two subplots too many bogging down director Scott Derrickson’s vision.

In 1978, young Finney (Mason Thames) is walking home from school when he’s confronted by a strange man with a penchant for makeup. That man, poor Finney soon realizes, is The Grabber (Ethan Hawke), a notorious serial killer who has already kidnapped five young boys. Now locked in The Grabber’s soundproofed basement, all Finney has for company is a disconnected black phone on the wall…a phone that soon begins to ring, offering advice and insight from the ghosts of the previous children. Meanwhile, Finney’s feisty younger sister Gwen (Madeleine McGraw) begins experiencing visions tha just may hold the key to her brother’s rescue.

The central idea here is so strong, it carries most of the film. Combining a ghost story with a slasher story (and one involving child murder, one of society’s most base-level fears) is just textbook 101, and when coupled with Derrickson’s consistently strong hand as a director, the film really sings. It executes its scares well, whether it’s the shocking reveal of a carved-up boy’s ethereal form, Hawke’s lurking man of many masks, and beyond.

It even plays with the horror inherent in its very concept, as one of the film’s most effective sequences involves a hard cut from a young boy staring at a windowless black van and the nighttime echoing of a series of phone calls as the word spreads throughout a small Colorado town, or flashbacks to one former victim’s tragically short life, from his birth to his kidnapping. Derrickson stages all of these scenes brilliantly, amplified by Mark Korven’s score, and when sticking to the central concept, the scares all work.

The problem is, the film tries to do too much. This is a simple story: a young boy’s struggle to survive in a horrifying scenario. This is why the original short story worked. However, Derrickson and fellow screenwriter C. Robert Cargill foolishly decide the film needs more. And because of this, we get a series of ridiculous subplots involving over-the-top alcoholic fathers, bullies at school, and a psychic sister evolved from one sentence of the original text.

Nothing with Gwen’s storyline works, whether it’s her supposedly cutesy foul mouth, her weird religious fixation, or her dream sequences where she wanders around the former victims and watches their kidnappings. When she plays off Finney as a sort of foil, she fairly works, as the two have entertaining banter together (the dialogue is fairly hit-and-miss throughout), but when she’s asked to carry the film solo, it’s a bit of a bummer. As a rule, if it takes you over thirty minutes to get to the start of a 20-page short story, you’ve screwed up somewhere.

The acting tends to follow the same rule as the writing: when the characters come straight from Hill’s original tale, the actors bring their A-game; the rest are left to flail. I was rather impressed with the performance of young Thames as Finney; this is a strong central performance that makes the terror feel real and honest. He’s easy to like, and easier to root for. And Hawke is having the time of his life creating an original, terrifying horror villain for the ages – honestly, he seems like he’s having too much fun. Do I need to worry about him? Oh, and James Ransone shows up at one point doing what I can only describe as a Jake Gyllenhaal impression, and you know what? It kind of works.

Sadly, I can’t extend similar praise to the new or fleshed-out characters from the original work. McGraw’s performance as Gwen just doesn’t work in any way, shape, or form, and much of the reason these scenes grind the film to a halt is because of her performance. Ditto Jeremy Davies as Finney and Gwen’s alcoholic father, which is the most cliched alcoholic father you’ll ever see on film – not an ounce of originality or nuance. And amongst the ghost children, things are pretty divided – Tristan Pravong and Banks Repeta have pretty memorable scenes and voices, while Miguel Cazarez Mora and Brady Hepner are kind of ridiculous.

The Black Phone is the perfect example of a B- movie. The story’s great, the acting’s mostly great, the directing’s great, and yet there’s just something missing in the little details. I would still recommend it to any horror fans or teens looking for a great date night. The core story here is so strong, you can look over the glaring flaws fairly easily. I just wish that Derrickson and Cargill had excised their subplots and focused on what made the story so great: a simple blend of ghosts and slashers, no muss, no fuss.

The Black Phone is now playing exclusively in theaters