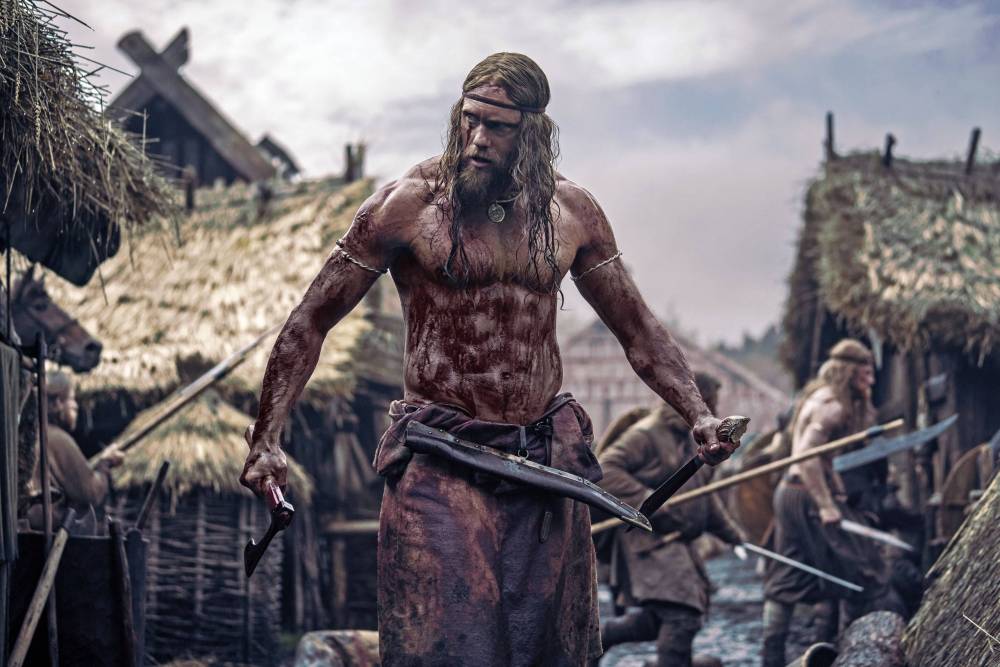 A Robert Eggers picture always involves three central themes: a fascination with history, the brutality of man, and an extreme lesson in the generational passing of fanaticism. This fascination gave us Black Phillip and The VVitch. It gave us the unforgettable (if not for me) The Lighthouse. But in The Northman, his newest epic outing, Eggers has given us a film unlike anything we’ve seen before: a masterful, grandiose tale of blood, revenge, and Norse mythos. And it is an unparalleled accomplishment of the modern era.

Based on the Norse legend of Amleth (which later evolved to become Shakespeare’s Hamlet), The Northman follows Amleth’s (Alexander Skarsgård) journey to avenge his father, King Aurvandill War-Raven (Ethan Hawke). Many years before, Aurvandill was murdered by his treacherous brother Fjölnir (Claes Bang), who then absconded with Amleth’s mother, Queen Gudrún (Nicole Kidman). Having gone undercover as a slave sold to Fjölnir’s Icelandic hideout, and aided by a fellow slave, the cunning sorceress Olga of the Birch Forest (Anya Taylor-Joy), Amleth sets out to accomplish his life’s mission: “I will avenge you, Father. I will save you, Mother. I will kill you, Fjölnir.”

The Northman is not a special film because of its story, per se. That’s not to say the thematic underpinnings aren’t intriguing – it is a masterful story of the brutality of men fueled by vengeful gods and the complicated, all-consuming nature of revenge. What it means is that The Northman is special because of how its story is presented. I have never seen a film so wholeheartedly create a visual representation of a classical epic, in all its glory. This is ancient literature come to life, from its opening invocation of the gods to its dramatic conclusion. Every digression in this film, be it a casual aside to a startling complication to a deus ex machina, adds a new layer to the legend with the lyrical cyclicalism of a campfire story turned into epic poetry, like The Odyssey or Beowulf.

Aiding the film’s unparalleled homage to Norse mythology is some of the most epic filmmaking of the modern era. A dying genre, no film has matched the thrilling scale of DeMille and Nevsky like this since Ridley Scott’s Gladiator and Kingdom of Heaven. Eggers puts his all into crafting a Norse epic rich in language, visuals, sound, and beyond, and in doing so he has crafted a world so magnificently rendered, it makes Game of Thrones look like dogsh*t. Eggers juxtaposes the fantastical with the realism, taking everything written in the mythology at face value and forcing you headfirst into the world of AD 895.

The Northman shies away from nothing; the brutality of its world is prevalent everywhere, even in our heroes. Slaves are taken and beaten, and entire villages are murdered, in gruesome detail. Prepare to feel every beheading, disemboweling, desecration, and throat ripped out by bare teeth. Holy ceremonies involve decapitating horses, barking at the moon, and burping and farting. A medieval version of rugby is played to the death with billy clubs. Magic ravens roam the skies, sea witches roam the beach, Valkyries ride winged horses over a cliff’s edge, and characters manage to befriend pet wolves.

Through it all, characters deliver hilariously rich Nordic prose, including “Your sheep’s clothing does not disguise you, Northman” and “Thank the moon that woman’s blood is the only blood to flow in your house tonight.” In fact, the only film that doesn’t sing with an ancient fury is Amleth’s simple declaration whilst holding a skull, “Alas, poor Heimir.” You know, just in case you didn’t pick up on the Hamlet allusions already. As overwhelming as this all sounds, it instead breathes and flows with a mastery of the craft, both honoring the scope of history whilst dispelling any notions of romanticism. And ironically, despite all of this, it still emerges as Eggers’ most accessible film.

It helps that everything is rendered with top-notch filmmaking across the board. Every facet of filmmaking is working in overdrive to force you to feel this film through every single one of your senses – you’ll feel the heat, see the trauma, hear the screams, taste the saltwater, and smell every single disgusting reality of this world. Eggers and cinematographer Jarin Blaschke perform the impossible and make this nasty, gnarly world a stunning extravaganza. Every shot brings this world to life – the sets, the costumes, the mud, the viscera, everything. This is a film of breathtaking scope, with stunning fires, lavish night sky, and hordes of shirtless, brutal men dancing around fires in bear suits. It’s remarkable.

There is one scene, a siege of a small village early in the film, that is shot in one impossibly effortless take that demonstrates the strategy, humanity, and brutality of medieval warfare. Juxtapose the epic scale of this sequence with the technical artistry of the film’s climax, set inside a raging volcano. The intimate is just as striking and as awe-inspiring as the immense. It certainly doesn’t hurt that the score, crafted by Robin Carolan and Sebastian Gainsborough, gifts each scene with a score that feels both of its time and timeless, not so much as gifting the film its epic heritage as it takes it by force, like the characters of the film. And it’s all kept to a brisk 140-minute runtime by editor Louise Ford (doing the Lord’s work, given the size and scope of this story).

Perhaps the most surprising and exciting attribute of the film is the acting. Oftentimes in films where the spectacle is the star, the performances feel more like window dressing than selling points. We praise Ben-Hur and Spartacus, but how often do we praise Charlton Heston and Kirk Douglas specifically? But not a single performer in all of The Northman pulls their punches. Skarsgård in particular is giving it his all, taking a character whose entire M.O. is being big and scary and none-too-bright and giving him more charisma and character than we’ve ever seen in his career before – and the man has won a closet’s worth of awards to date.

He is, however, as all epic leads are, outshone by his supporting cast of heroes and villains. Bang’s villainous Fjölner is an enigmatic villain, drawing the eye whenever he’s onscreen. Bang plays the role as a cunning, serpent-like survivor, willing to do whatever it takes to live another day, and the film doesn’t work if we can’t boo and hiss him. Kidman, meanwhile, gives one of her most complex performances to date as Queen Gudrún. She delivers a monologue late into the film’s runtime that is arguably better than her last handful of performances – certainly miles ahead of her recently-nominated work in Being The Ricardos.

Anya Taylor-Joy reunites with her VVitch director and continues to prove they are a team for the ages, as she possesses a movie star-like charisma that Eggers just completely understands. It’s not a meaty role, but there’s more than enough for her to prove her worth. Meanwhile, child actor Elliott Rose punches well above his contemporaries as young Gunnar – it’s rare to see a young performer so gifted and so non-grating. Oh, and while the rest of the cast’s big names essentially amount to cameos, there are no slouchers in the bunch. Hawke shines in a brief scene as King Aurvandill War-Raven (such a great name). Björk plays a Sea Witch, and it’s as perfect casting as it sounds. And Willem Dafoe shows up in the role he was born to play, as a Viking jester/holy man.

The Northman is the golden example of why one watches movies. Even if it lacked a poignant story condemning the revenge epic and a whitewashed romanticization of history, it would still be a success. Why? Because it f*cking rules. It is a history lesson come to life, a fascination vision of the vileness we come from, and the repulsiveness we must continue to evolve past. I’m not sure how much longer Hollywood can make films like this. It’s certainly less likely they’ll be of this caliber. And I doubt they’ll let Eggers ever make something like this again. But if there’s even a sliver of hope, may the gods continue to shine upon Robert Eggers, and may the muse continue to bolster his career in the wake of this modern-day masterpiece.

The Northman will premiere exclusively in theaters this Friday, April 22nd