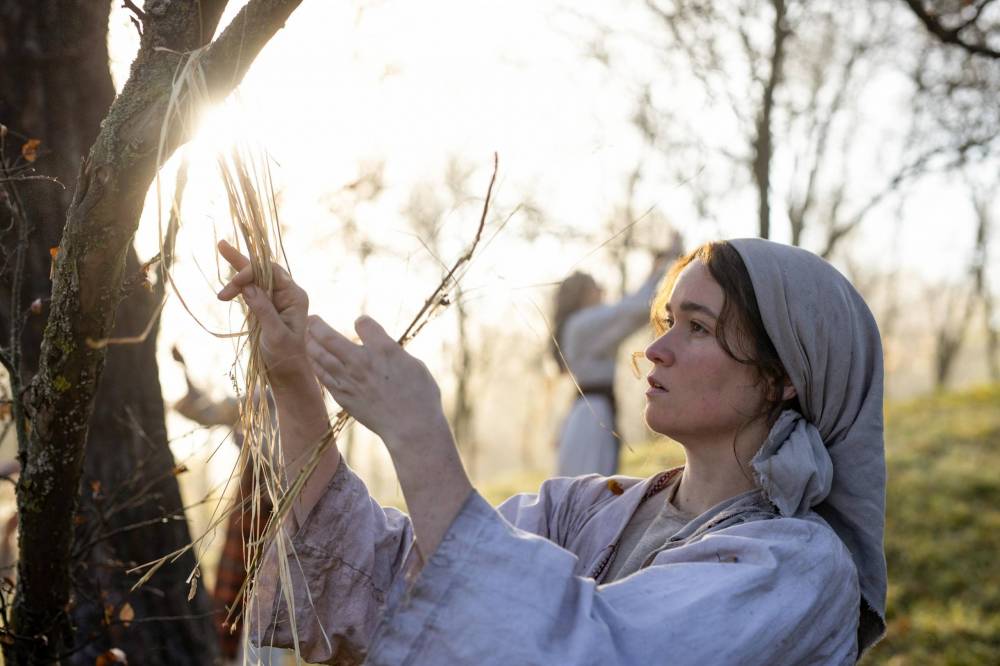 In a period in film history where studios seem to play things safer and safer with each outing, there’s an innate desire to praise Big Swings – films that grapple with the nature of existence in new and challenging ways. Take, for instance, Goran Stolevski’s You Won’t Be Alone, a cosmic mix between The VVItch, Lamb, and Under The Skin as directed by Terrence Malick. In theory, that’s an exciting, challenging prospect, and there’s certainly something to admire. But ultimately, You Won’t Be Alone feels more like throwing chocolate sauce, jalapeño peppers, and squid into a blender – they just don’t work together, no matter how talented the chef.

Sometime in ancient Macedonia (it could be anywhere from the Middle Ages to the 19th century, honestly), a young woman named Nevena (played originally by Sara Klimoska) awakens in a cave. Years before, Nevena’s mother had made a deal with the local witch and baby-eater Old Maid Maria (Anamaria Marinca): if she spared the infant Nevena, she could have the girl the day she turned 16 (as payment, Maria cut out Nevena’s tongue). Sixteen years later, Maria chooses to spare the girl and teach her the ways of witchcraft. However, having never experience life outside of her cave, Nevena decides to use her powers to explore the world, transforming into different individuals she encounters to see how they experience life. In her journey, Nevena hopes to uncover the wonders of the world, in all its sexy, violent, beautiful glory.

There’s no question that Stolevski’s world-building is top-notch. The film captures you from its early moments (possibly the film’s finest), set in a small village as a witch tries to eat a baby. It sets a nasty, striking tone for the rest of the film, and it appropriately rolls with every punch it throws. As a story about a semi-human individual experiencing the world for the first time, Alone offers up several ideas from the point of view of a novice – sexuality, gender, family, love, repression, emotion, cruelty, and beyond. Stolevski boils down the human condition to the goings-on of this small rural village – how cruelty creates monsters, how sex, tenderness, and love all interact along a thin line, and how human kindness can overcome intolerance and cruelty. Stolevski continuously finds new and riveting ways to demonstrate these ideas – not least of which the fact that transforming into new identities involves ripping out people’s hearts and placing them in one’s own gaping chest hole.

All of these exciting ideas are rendered in some of the year’s most exciting filmmaking. The cinematography by Matthew Chuang is astonishingly gorgeous. Whether he’s capturing an expansive cave, an encompassing forest, or a small farm in a small village, every shot exemplifies the beauty of the natural world. Images leap out at you, emphasizing the themes and motives which they carry – a woman who emotionlessly dispatches a husband who tries to use her for violent sex; a young girl given a chance to live the life stolen from her; and a young maiden stepping out into a world she’s never seen and experiencing the greens and blues of the natural world for the first time. I’d also be remiss if I left out mention of the makeup design for Old Maid Maria – it’s some of the most unique and interesting in many years.

However, as strong as the filmmaking may be, it never covers up the glaring flaws at the center of the production. Several reviews have made the comparison to Terrance Malick, and it’s easy to see why. And yet this exact comparison speaks to the film’s shortcomings. Malick is notorious for taking interludes with the natural world, often at the expense for the film’s narrative. And yet, Malick does so because the beauty of the natural world complements the profundity of his central premise. Stolevski mistakes this beauty for profundity, assuming that by capturing the natural world around the characters, it will take the place of character development and commentary. It certainly doesn’t help that no one involved with the production stopped to think, “Hmm, maybe we shouldn’t have the dialogue represented almost exclusively within an isolated woman’s warped brain and written in a recreated dead language.” The audience is forced to decipher what’s happening from jibberish poetry spoken in a made-up language, rendering its theses all but unintelligible. A silent film honestly would have worked better.

The film manages to salvage its themes and story with its performances, which complement the cinematography in their commitment to the premise. Every actor playing a version of Nevena manages to impress, including Klimoska’s main rendition, Noomi Rapace’s first transformation – all confusion, wonder, and silent loathing – and especially Alice Englert, who takes on the Nevena of the film’s third act. Englert in particular is worth mentioning for a moment where she captures – at long last in the character’s journey – the face of a woman experiencing pleasurable sex for the first time. It’s tremendous acting. But let’s not mince words: this film belongs to Anamaria Marinca’s Old Maid Maria, one of the year’s most delectable characters. Marinca plays Maria with a biting, entertaining cynicism throughout, yet consistently hiding an underlying pathos. You know there’s a tragic backstory, one that it seems Marinca is trying to hide, and yet she never tips her hand until the final act, which she executes brilliantly.

You Won’t Be Alone is a film that strives for genius and arrives at noble failure. It’s a classic case of over-direction – an interesting story destroyed by a heavy-handed director who’s watched too many Malick movies. I’m not saying people can’t or won’t find something worthwhile in the film’s themes or narrative. I won’t even say I didn’t find scenes or ideas worth reflecting upon. But this film ultimately amounts to little more than a missed opportunity; a chance to explore the beauty of life and nature in all its ugliness and beauty, and instead offers little to say that hasn’t been said before, and better.

You Won’t Be Alone is now available to rent on VOD; it is also playing in theaters nationwide