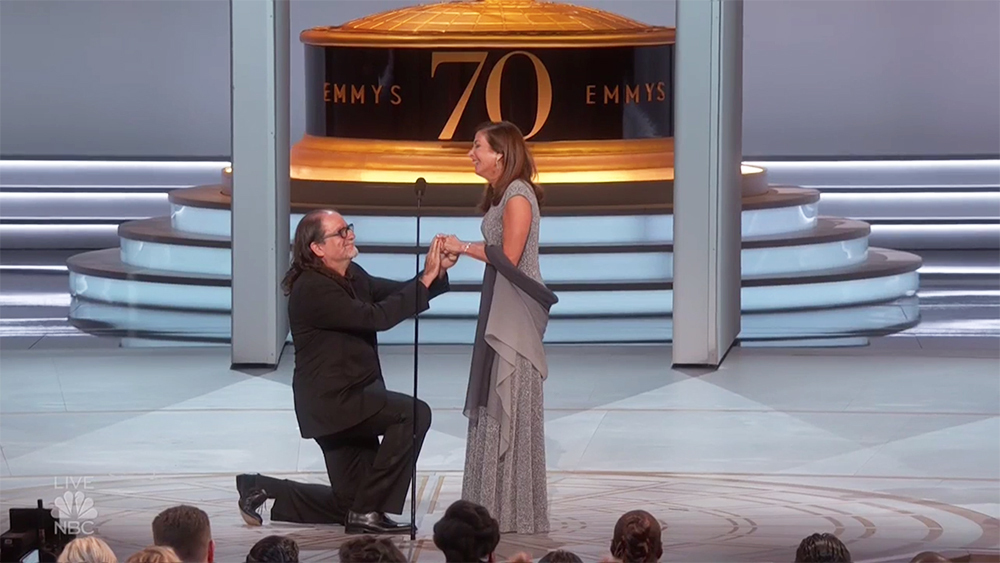 The Emmys have come and gone, and there were more than a few moments of shocks, surprises, and predictability as the top three awards went to The Assassination of Gianni Versace (duh), Game of Thrones (unsurprising but iffy there), and The Marvelous Mrs. Maisel (whoa).

Starting with those first two non-shocks, Game of Thrones continued its win streak by surpassing last year’s champ The Handmaid’s Tale to take home Best Drama Series and Best Supporting Actor for Peter Dinklage. Meanwhile, Gianni Versace unsurprisingly waltzed its way to Best Limited Series, along with a deserving win for Darren Criss and a surprising (but deserved) win for Ryan Murphy). However, the biggest shock of the night was by and large the love fro The Marvelous Mrs. Maisel, which won Best Comedy Series (expected), Best Actress for Rachel Brosnahan (expected), Best Supporting Actress for Alex Borstein (a shock), and both writing and directing for creator Amy Sherman-Palladino. I was a little lukewarm on the series – it’s my least favorite of the Palladino trilogy – however, the nice thing is I can just assume that the Emmy voters have finally decided to use Netflix to catch up on Gilmore Girls and right that wrong from a decade ago.

Similar surprises dropped throughout the night. For example, while both were heavy favorites to pull off the upset, no one expected The Crown or Barry to pull through the way they did. The Crown managed to win a shocking Best Director Emmy for Stephen Daldry as well as knock off previous winner Elisabeth Moss so that Claire Foy could swoop in for her swan song. As for Barry, the show won an Emmy for Bill Hader’s melancholic hit man-turned-actor, which shocked the first-time winner/comedian, as well as awarded legend Henry Winkler his first Emmy in 43 years. That’s a shocking number, and I’m so pleased that Winkler won for what may be his greatest turn. Meanwhile, The Americans finally managed to go out on top, with Matthew Rhys winning Best Actor and the show winning Best Writing. Thandie Newton upset favorites Lena Headey and Ann Dowd to win the Best Supporting Actress award she was expected to win last year, and she was so stunned by the announcement she accidentally swore. I love her dearly. However, the biggest surprise of the night came when Regina King upset Laura Dern for Best Actress in a Limited Series/TV Movie. It was an exciting sight to witness, as King herself was caught off-guard, and alongside Foy in the Best Actress category, the two should make for a solid double-header coming into the Oscar race (Foy will be up for First Man, King for If Beale Street Could Talk).

However, the ceremony also had its fair share of snubs. Despite being one of the most nominated shows of the evening, Atlanta did not win a single award all night. Not Best Comedy, not Best Actor, not even Best Direction for Hiro Murai. That’s a little upsetting, and surely we could have taken away one or two Maisel awards for the true best show of the year. Similarly, David Lynch went home completely empty handed for his work on Twin Peaks: The Return, and while I was a little lukewarm on the show, I do wish he had won a Best Director Emmy for his clearly-visionary work. And in terms of heavy favorites falling out of contention, both This Is Us and The Handmaid’s Tale lost every award they were up for, including Sterling K. Brown, Elisabeth Moss, and the latter’s writing and directing. I’m glad the shows that won had their moments of glory, I’m just a little stunned that they did so at the expense of such heavy favorites. I guess that’s what happens in such a tough Emmys year.

And what of the ceremony itself? Well, I liked the fact that the show had a breezy, light feel to it, keeping everything moving without sacrificing the speeches or the awards. I just wish the hosts were a little stronger. Colin Jost and Michael Che were definitely better than I expected, and two of their jokes actually managed to land – specifically one about a show titled Fifteen Miles Outside of Atlanta and a bit about the “Reparations Emmys,” where Che delivered Bill Cosby’s requisitioned Emmys to deliver to black television performers who changed pop culture without earning a trophy (hooray Jaleel White!!!). However, a series of bad jokes and a horrible skit involving the usually-funny Maya Rudolph and Fred Armisen often dragged the night to a dead halt. This did, however, allow for the speeches and presenters to shine through, as well as a few strange but wonderful moments of audience participation.

Obviously the biggest news from the show is that Glen Weiss, after earning an Emmy for directing the Oscars, used the opportunity to propose to his longtime girlfriend. It was an honest, sweet moment, made all the better by Leslie Jones’ perfectly shocked reactions (please let her host something, she’s so good). Congrats to the happy couple. On the other end of the spectrum, Twitter launched into a frenzy at the realization that Teddy Perkins was in the audience. For those who don’t know, Perkins was a creepy, Michael Jackson-esque figure portrayed by Donald Glover in whiteface on his show Atlanta. This is a humorous observation by itself, but things become stranger when one realizes that Glover and costar LaKeith Stanfield were also in the audience, raising the question: Who the hell was that? And where the audience failed, the presenters and speeches wowed. I’m shocked that they allowed Rick and Morty and Hannah Gadsby to present, but those were two of the best moments of the night, so I’m not going to complain. And as for the speeches, highlights include the sheer joy of Henry Winkler and Darren Criss, the utter shock of Bill Hader and Regina King, and the powerful wordsmithing of the great Ryan Murphy and RuPaul herself, who really knows how to work a stage.

This concludes the 70th Primetime Emmy Awards, which will go down as a decent show in the program’s history. I’m glad so many great shows run, and I’m glad I have such strong recommendations going forward as a distraction during Oscar season. You can see the full list of winners below, and I’ll see you all again for next year’s Emmys!