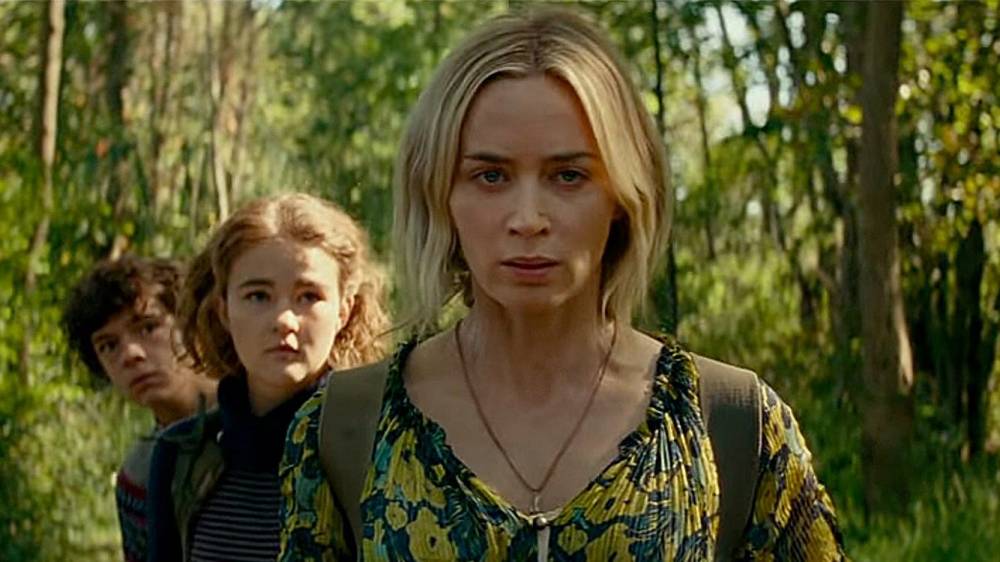 In 2018, John Krasinski dazzled the world with a concept that is, in this day and age, seemingly unheard of: a midbudget original blockbuster unattached to IP that placed the emphasis on filmmaking and acting instead of special effects and brand recognition. The gambit paid off handsomely, bringing in hundreds of millions of dollars and earning a litany of great reviews – mine included. So it was understandable – albeit disappointing – that Krasinski immediately signed up to direct the second entry in the series, which heralded in the slow, but steady return to theaters in the wake of the pandemic. Did A Quiet Place: Part II live up to the original? Not quite, but it’s still a well-made blockbuster, and it possesses a Spielbergian charm in its own right.

Beginning moments after its predecessor ended, A Quiet Place: Part II follows the Abbott family in the aftermath of the alien attack that left their home destroyed and patriarch Lee (Krasinksi) dead. Now knowing how to kill the sound-sensitive aliens, but hopelessly outnumbered, mother Evelyn (Emily Blunt), son Marcus (Noah Jupe), and deaf daughter Regan (Millicent Simmons) head out into the woods, armed with only a shotgun and Regan’s alien-killing cochlear implant, as well as a newborn infant whose cries could attract a predator. They soon find shelter with a former neighbor, Emmett (Cillian Murphy), who has become hardened in his years after watching his family die in front of him. When Regan realizes that there is not only a colony of survivors somewhere in the world who possess a radio tower capable of transmitting an alien-killing broadcast, she sets off with a reluctant Emmett to locate the survivors and put an end to the alien invasion.

The greatest obstacle A Quiet Place: Part II has to clear is the fact that it’s just so unnecessary. The first film worked because it functioned as a stand-alone entity, an original production of high-quality execution. There’s not much to it worthy of justifying a sequel. This can be seen from the very beginning, which functions as something of a victory lap through places we’ve already seen via flashback as our heroes barely survive the opening alien assault. It’s all very fan-service oriented, as somehow, out of all these people, Krasinski’s Lee is the only one to instantly figure out that they attack based on sound.

Meanwhile, to accommodate the film’s taut 97-minute runtime, the film relies on a lot of corner-cutting. Our characters manage to figure out that the secret colony is beyond the sea because they are the first ones to realize that the secret message is…the song “Beyond The Sea.” In order to raise the stakes, the characters make the bafflingly bad decision to separate from each other. You have limited ammo and only one of you has the secret alien-killing weapon! Why would you separate?!? And I won’t even touch on the aliens’ second-biggest weakness, which makes absolutely no sense based on Earth’s topographical makeup.

My biggest complaint, however, is the monsters themselves. In the first film, the terror of these creatures could be mostly hidden, thanks to quick cuts, hiding around corners, and the film’s low-level scale (it’s all focused on one family in a farmhouse in the woods). Now that the film has carte blanche, and the scales are ratcheted up to entire communities, the presence of many monsters, all onscreen, becomes requisite – and in doing so, ruins their allure. The film forces us to ask the question, “What exactly do these monsters do?” I had assumed they ate people, thus requiring their attacks. But here, we don’t see much snacking – instead, the aliens just sort of…bat them around, sort of like a cat. As the film goes on, we slowly realize that while Krasinski’s story is pretty decent, his actual script is not, filled with bad dialogue and over-the-top convolutions.

Luckily for the film, none of these flaws are out-and-out dealbreakers, thanks to Krasinski’s talents as a filmmaker. I will forever be grateful that the former Office star has such a knack for creating tension without gore, utilizing foreshadowing and dramatic irony to earn its scares the honest way. Krasinski utilizes shallow focus and shadow-work to create tension, especially regarding Simmons’ Regan, who is incapable of hearing the monsters. Therefore, the camera may focus on Regan, who remains blissfully unaware that an equally deaf alien creature has wandered in behind her.

Krasinski also cranks up the tension with the proper amount of obstacles and stakes, each unleashed at the correct time, in order to make scenarios more insufferably tense. A scene could start with a crying baby, then escalate to a shaking tin can, then escalate again to a leg caught in a bear trap. Even when the film threatens to get too ridiculous or silly, Krasinski never takes his foot off the gas, so you have limited time to reflect on it. And when the film inevitably marries Krasinski’s knack for foreshadowing (you’ll know exactly what’s about to happen the minute you learn that a towel is the only thing keeping their secret vault hideout from trapping them without air) with Marco Beltrami’s terrific score, you’ll find yourself giving in to temptation and going along for the ride.

Krasinski’s talents as a filmmaker expand well beyond his use of tension. From the jump, he makes it abundantly clear that he knows how to compose a shot – a fact that, after months of poorly staged actioners, feels like a breath of fresh air. Krasinski’s team operates at top-notch throughout, from Polly Morgan’s cinematography (an early warehouse battle is expertly staged) to the still-remarkable soundscape. You’ll remember exactly why the first film earned an Oscar nomination within the first few minutes, hear littered with the sounds of baseball games and large crowds and loud vehicles, helping viewers understand immediately why society crumbled so quickly. Everything from quiet footsteps to loud-ass birds to massive explosions echoes through the speakers as if the team wishes to declare “Yeah, we still got it.” I also want to praise the editing by Michael P. Shawver, which consists of some top-notch match cuts keeping the dual stories moving, ranging from flaming fires to the two siblings’ faces as they take an important stand. It’s all expertly done and a helluva lot of fun to watch.

As for the acting, all four members of the core family unit are still great, although Krasinski is obviously just a cameo. In particular, the film succeeds based on the strength of Simmons and Blunt’s performances. Blunt won a surprise SAG Award for her work in the first film, and she’s still great here, both in taking command of her family and in a terrific, poignant moment where she mourns at her dead son’s memorial (it’s worth noting that nothing in this film is as audacious as the killing of the family’s five-year-old son in the first film’s opening moments). Simmons, meanwhile, is a true stand-out, emerging as the series’ new lead with aplomb and talent. She’s got a helluva career ahead of her, if the first film didn’t make that clear enough. Noah Jupe has always been the short shrift of the four leads, having the least screen time and the least to do, but he does what he can pretty well.

Outside of the Abbott family, I cannot overstate how happy I am that someone other than Christopher Nolan took notice of how great an actor Cillian Murphy is. Casting him as a hot world-weary redneck is just genius casting on Krasinski’s part, and he steps into his role as reluctant hero quite well. Also standing out is Hamilton actor Okieriete Onadowan, who has a small, but memorable cameo from the film’s opening. I’m a little disappointed that top-notch character actor Scoot McNairy is subjected to a small cameo as the leader of a feral human tribe, resulting in approximately two minutes of nonsensical screen time. He barely has more to do than child actor Alice Sophie Malyukova, his partner in crime who is an appropriately creepy child. Still, I’m willing to forgive this short-shrifting based on the casting of Djimon Hounsou as a haunted survivor. Hounsou shows up almost exclusively to deliver a ripoff of Quint’s USS Indianapolis speech from Jaws, and yet it still works because he’s Djimon F*cking Hounsou. It’s a solid enough ensemble to make the action work, and that’s all you can ask for.

A Quiet Place: Part II is a reminder of the type of blockbuster Hollywood used to revel in, and a welcome return to the theatrical experience. It is a messy blockbuster, imperfect in execution – as so many of them often are. But what it lacks in compelling dialogue it makes up for in its simplistic thrills. It is a taut 97-minute roller coaster, hitting all the right beats with just enough skill in front of and behind the camera to keep the audience captivated. It’s an unnecessary sequel, to be sure. But if we’re living in an era of unnecessary sequels, I would prefer more of them be as good as this one.

A Quiet Place: Part II is now streaming on Paramount Plus; it can also be rented from most VOD providers