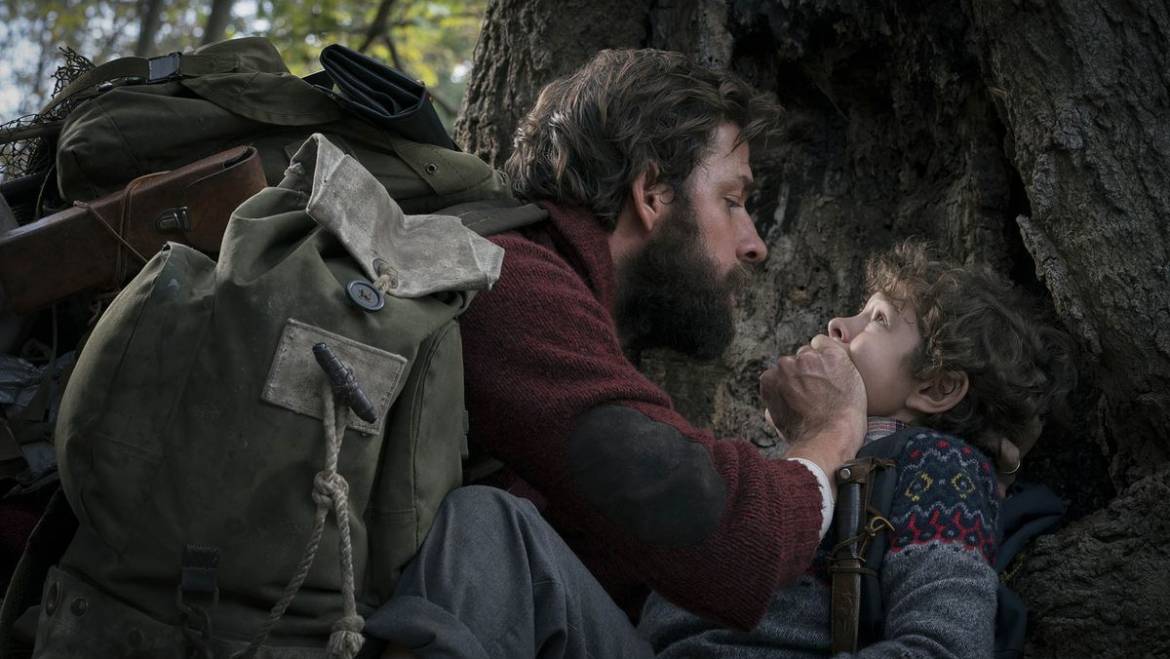 A Quiet Place is one of those special horror films that wants to change the game with its filmmaking prowess. Like Cat People, Halloween, Hush, and Suspiria before it, John Krasinski’s family drama-horror uses an elevated, innovative filmmaking technique to tell a complex story in the simplest way possible. Both a metaphor for parenthood and loss as well as a straightforward jump-in-the-night romp, it stands out as a shining example of filmmaking in the modern era of horror cinema.

It is the year 2021, and the human population has been decimated by a herd of monsters bent on hunting them down. While blind, the creatures have extremely sensitive hearing, allowing them to quickly massacre anything that makes a sound. The Abbot family, while dealing with a loss the previous year, has managed to survive the apocalypse through the complete elimination of sound. Father Lee (John Krasinski) does his best to keep the family together and prepared for the future, while mother Evelyn (Emily Blunt) prepares to give birth. Meanwhile, son Marcus (Noah Jupe) tries to learn to control his fears while daughter Regan (Millicent Simmons) fights with her stern father and tries to deal with her deafness. As everything goes wrong at once, though, the family must remain quiet or fight for their survival.

Like all great horror films, A Quiet Place draws its horror from all-too-real themes. At its core, A Quiet Place is about a family trying to stay together after an unspeakable tragedy, about trying to grow up when you suffer a disability, and about a parent’s desire to create a world that is worthy and safe enough for their children. In a world that grows more and more frightening every day, parents feel an immense pressure to find the best way to protect their children from the world around them, raising questions as to what is the best way to deal with these threats. Do they become overly protective, sheltering them from the outside world and refusing to take unnecessary risks? Or do they learn by doing, allowing fate, chance, and preparation be their guide in a terrifying new world? All these issues are complicated when you factor in grieving and loss, as judgments are clouded, emotions run high, and mistakes are made. Still, even in the face of all this, most parents find themselves forced to make decisions like this, even on a micro scale, for as Evelyn describes it, “If we can’t protect them…who are we?” These fears are escalated once the added complication of a deaf child enters the picture, and Krasinski does a great job of capturing her frustrations, both as a budding teenager and as a physically handicapped person. Regan’s angst lives on both a micro and macro scale, with her outbursts feeling personal as she struggles with a strained relationship from her father and her dealings with her disability as well as overwhelming as they put her at risk in the new world and may have contributed to an incident she feels great guilt over. These are interesting ideas to explore, and the film dives into them at great lengths, but what’s perhaps more interesting is the film’s way of exploring these ideas. Thanks to the stellar sound design (more on that in a minute), the depths of Regan’s deafness are explored in great detail. While each sound is normally amplified, we explore the expansive silence of Regan’s own mind whenever we cut to her perspective. We experience the frustrating, frightening nature of her inability to hear the world around her. Not only does this give us more insight into her thoughts and actions, but it allows for great suspense – there is a jaw-dropping, gasp-inducing sequence of tension that I won’t spoil here, but you’ll know it when you see it.

However, the film is not simply a thematic triumph – above all, it is a technical one. Hands down, the use of sound in A Quiet Place is one of the most creative in recent memory. The atmospheric, eerie use of silence amplifies every sound created. Each creak, crack, or thud has added weight, and it allows for a creepy sense of dread to permeate throughout the film. Only occasionally does the wonderful score by Marco Beltrami kick in, ratcheting up the tension without ever overwhelming the audience or the sound design. However, even more exciting is the way the film balances tension. Each frame is smartly shot, and while the first half of the film has an overall sense of tension and dread, the film becomes unbearable as the halfway mark ushers in terror amped up to 11. Krasinski’s use of foreshadowing could rival J.K. Rowling’s, and a single shot of a nail will haunt you until your dying day. His use of color is symbolic, as red light floods the film’s setting, luminescent blood fills a bathtub, and a motif of lit fires not only looks cool, but symbolizes a society that is close, and yet miles apart. Even the jump scares work – there was a very obvious mislead involving a character’s death that still made me mess up the note I was writing in legit fear. And sure, the climax drags on well past the point it should have, resulting in my commenting on more than one occasion, “F*ck this climax.” However, as it all manages to tie together with the perfect ending, and Krasinski never lets up as he delivers his overlong finale, it is an easy flaw to ignore.

As for the acting, each of the four cast members is in top form. Krasinski does a great job in his role as a forlorn father trying to keep his family alive, and this may be because Krasinski’s eyes, most known for making us laugh throughout The Office, have a hint of sadness inside. It allows for deep expressiveness, grief, pain, and love even as he is cut off from his trademark wit. Meanwhile, it should come as no surprise to anyone that the film’s secret weapon is Emily Blunt, who is a gift to this world. She can deliver a line as a whisper or a scream, sell an important moment with her eyes, or simply convey an entire emotional state with the posture of her body. It’s a rare gift for an actor to possess, and bravo to Blunt for pulling it off. Second to Blunt would perhaps be young Millicent Simmons, who is truly wonderful as Regan. Simmons shows us Regan’s struggles, her grief, her anger, and her resourcefulness through her looks and body language, and stylistically, it works that she somehow carries herself as a cross between Krasinski and Blunt’s performances, as it truly sells to the audience that she is their daughter. And as for Noah Jupe, his role isn’t exactly as flashy as the other performances in the film, nor is it as strong as his earlier role in Suburbicon. However, Jupe gives the performance his all, and even if there isn’t enough material for him to elevate himself beyond the status of a male “Scream Queen,” his talents still allow him to carry his own with this stellar cast.

A Quiet Place is a model example of stellar filmmaking. John Krasinski has poured his heart and soul into creating a modern parable filled with tension and fear, not unlike Jaws and Night of the Living Dead. And sure, there are a few plot points and filmmaking decisions that will stick in your craw – a major aspect of the plot involves Evelyn’s pregnancy, a decision that is portrayed as planned and also had to take place long after the start of the apocalypse, and thus completely illogical – but in the end, you aren’t thinking of these nitpicks. You are thinking of the terror it filled you with, and the emotions it drew out of you. And you’re thinking of how the ending perfectly encapsulated the film’s message in both a literal and metaphorical sense. This is just masterful filmmaking of the highest order, and it stands out as a shining gem in the Golden Age of Horror.