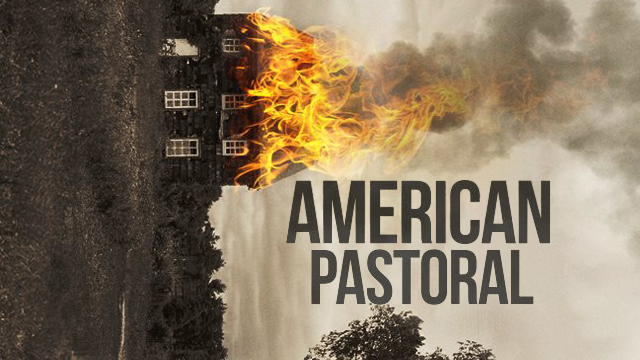 A lot can change after sitting on a film for a couple days. Sure, most of the time your opinion stays the same. However, with a little more thought, you can begin to see the film in an entirely new way, changing your mind for the better. Or you can realize things don’t exactly hold up as well as you once thought, lowering its standing in your mind. When I walked out of Ewan McGregor’s American Pastoral this past Tuesday, I very much enjoyed it. It was flawed, but the story sucked me in. However, having sat on it for three days, thinking back on the performances and the themes, I realize that it doesn’t exactly impress in the long term. I’ve come to the conclusion that McGregor and company did everything they could to milk this tale for all its benefits, but due to some harsh realities, there was only so much they could do.

Told in flashback by two chums reacquainting at a high school reunion, the film mostly follows the events that brought about the relatively young death of “Swede” Levov (McGregor). A Jewish kid who passes as Aryan, Swede was the perfect All-American: blonde hair, blue eyes, great at every sport, adored by all, and living the American Dream. He marries Miss Rhode Island (Jennifer Connelly), moves out to a farm in a little conservative village and immediately has a pretty young daughter while running his father’s glove factory. However, as his daughter, Merry (Dakota Fanning), grows up, she faces an array of problems: she has a debilitating stutter, she has an unhealthy fixation with her father, and an anti-war sentiment that grows more and more intense with each passing day. One day, a bomb goes off, destroying the post office and its innocent owner, and everyone’s lives are changed forever.

The biggest hurdle facing this film was always going to be Phillip Roth’s original writing. Roth loves to play with massive themes while using ostentatiously philosophical prose, lending itself much more to the page than to the screen. In attempting to adapt these novels, the writer and director are left with one of two choices: they can keep everything exactly the same, including voiceover and dialogue, as they did with the other 2016 Roth film Indignation, or you can make everything seem more natural, as was done here. The problem with the first option is everything sound unnatural and pandering, choosing to tell instead of show. However, the second technique is equally challenging, as it risks making everything sound simplistic and cliché. This is the biggest issue facing the film: while the themes are interesting, and the story unique, once you begin diving into the themes that Roth so carefully explored on page as they’re shown on screen, it begins to crumble. Fanning’s attempt at a stutter sounds incredibly forced (although it works for at least half of the portrayal), the major ideas of the death of the American Dream are incredibly on-the-nose, and the ideas of the Jewish identity seem tossed out without ever really being explored. I appreciate the attempts of John Romano to make this script sound realistic, but it just comes out trite-it’s all style and no substance.

Another failed idea is the film’s convoluted framing device. In the novel, author Nathan Zuckerman hears the story of his fallen idol from the Swede’s brother Jerry. He then spends the entire book studying the case, not only crafting a story about the death of the American Dream, but the realization that our heroes aren’t as perfect as they should be. Here, they begin and end the movie with Nathan, as played by the ever-talented and ever-wasted David Strathairn, who hears the story at the reunion and then attends the funeral. That’s it. He makes no other appearance, meaning the story we are told must be taken at face value. There’s no reason for Nathan to even be involved in the story, as there is no narrator, and no study of hero-worship. And yet, he’s there, providing narration over his ten minutes of screen time. It’s a waste, it’s overbearing, and it ruins the flow of the film.

However, despite how infuriating some of these choices are, and how problematic the adaptation is, there’s a lot of good in the film too. Everyone involved tries their hardest to make the film work, and in a lot of ways, it does. McGregor gives his best performance since Beginners, and proves that he’s actually a pretty darn good director too. His handling of the time changes is impeccable, his emotion during the more dramatic scenes works wonders-he wholeheartedly brings the Swede to life. It’s possible that complaints could be raised about the most WASP-y actor alive playing a Jewish man, but considering the Swede’s goal is to make himself as non-Jewish as possible (on a subconscious level, at least), it actually works for the character. Fanning’s stutter becomes obnoxious after awhile, and seems like overacting, but at the beginning, she really is trying her best, and brings a fire and empathy to Merry’s plight. Connolly is the most flawed in the cast-for most of the first three quarters of the film, she’s giving her best performance since her Academy-Award winning role in A Beautiful Mind, but takes an awful turn during her “dramatic” moment, suddenly taking her so-far good performance to a bad, bad place. If I had to pick the three stand-outs in the film, it would have to be Peter Riegert as the Swede’s father, Uzo Aduba as factory worker Vicky, and Valerie Curry as radical Rita Cohen. Riegert and Aduba bring a wit and a passion to each scene they’re in, with Aduba providing the movie a heart and Riegert reminding us why he’s been a great actor since his days on the set of Animal House. Curry, meanwhile, has a passion that shines through in a pretty dour second half. It becomes desperately needed when Fanning disappears and Connolly starts overacting.

Overall, if there’s anything great to be said about this film, it’s that it is an excellent experiment for McGregor to stretch his muscles. While the script hobbles any attempts to make this film great, McGregor proves that he is a true talent on both sides of the camera, managing to inspire his cast, compose a scene, and find strong messages in an otherwise mediocre script. While I don’t think American Pastoral lived up to its own lofty expectations, it shows that there’s enough potential to make its director/star a powerhouse for years to come.