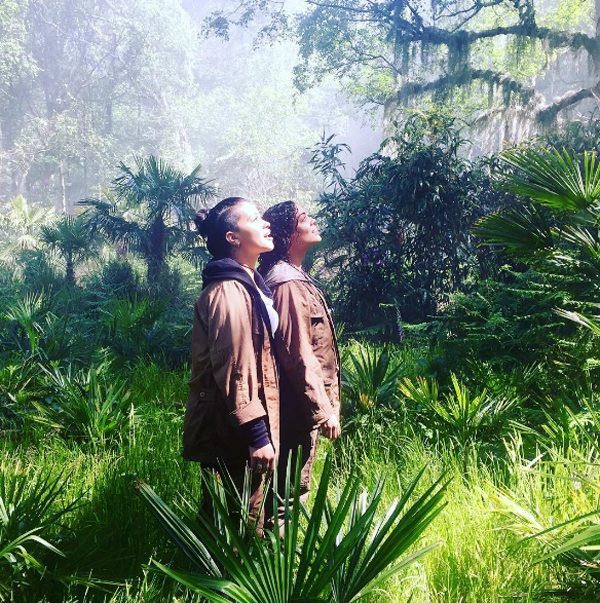 There’s nothing more disappointing than when a film with a lot of promise ends up disappointing you. After making the intelligent, provocative Ex Machina, Alex Garland’s adaptation of the best-selling novel Annihilation could have been a thought-provoking, innovative sci-fi extravaganza. Instead, it serves as an example of style over substance, a very pretty film that hopes to distract audiences from the fact it doesn’t have any clue what it’s talking about. It’s colorful BS, a testament to directorial skill but a massive failure in its writing, and it leaves the film as a confused mess.

A year after his disappearance, acclaimed cellular biologist Lena (Natalie Portman) discovers her husband, soldier Kane (Oscar Isaac) dazed inside their house. As he begins hemorrhaging blood and goes into a coma, the government comes to ask her to explain the situation to her: a mysterious phenomenon known as The Shimmer has appeared in the Southern United States. Marked by a colorful vortex, Kane is the sole survivor of several missions sent in to investigate what, why and how it is occurring. With her husband dying and the world in peril, the government sends Lena along with a group of scientists, including Dr. Ventress (Jennifer Jason Leigh), Anya Thorensen (Gina Rodriguez), Josie Radek (Tessa Thompson), and Tuva Novotny (Cass Sheppard), in order to determine what exactly is happening inside the mysterious new world.

The problem with Annihilation is that it consistently wants to be about something without ever actually being about something. The sci-fi genre, as a rule, tends to be split into two different types: art and pulp. Art uses science fiction as a way of exploring deep-seeded fears and ideas about the universe through where humanity is going as a society – 2001 asked where we came from and where we are going, Her asked what our relationship with technology would eventually lead to, and Under the Skin explored whether our emotions decided who we are as humans. Meanwhile, pulp is simply a straightforward romp in a cool new setting – Alien is a haunted house film in space, Star Wars is a Western samurai hybrid, and Mad Max: Fury Road is a chase film. Annihilation believes, deep down, that it is art, but it never really establishes why that is. Oh, there are definitely themes that come up that could have made this an artistic vision, but they are dropped and forgotten whenever the director grows bored with them. Take, for instance, the motif of cancer. The film opens on an image of what we learn are cancerous cells. Meanwhile, when the characters first start exploring The Shimmer, Lena keeps referring to things she sees in very blatant cancerous terms. From the get-go, I asked myself, “Is this going to be a metaphor for cancer?” and by the twenty-minute mark, I thought the answer was yes. Which, you know, is fine – even if it was a little obvious and the symbolism was all on the nose, it at least had a vision. However, just as quickly as I determined the film was a cancer thing, the film stopped providing any indication that this was the film’s theme. And I don’t mean that the message became too subtle or stopped being blunt – I mean that they just stopped making the film about cancer. The minute Garland got distracted with the visuals, he forgot what he was trying to accomplish. But wait, there’s more! After almost an hour of other nonsense, leading you to believe that the film isn’t about cancer, it is casually mentioned that one of the main characters has cancer, leading you back to square one. Only this fact is never mentioned or treated again! It’s like The Room – is the cancer angle actually important, or only a false flag to trick us into thinking it’s actually important? Either way, it’s just lazy screenwriting to forget your main thesis.

The same thing happens with the film’s religious undertones. The film seems to have…something to say about religion, although I couldn’t tell you what it is, positive or negative, intentional or unintentional. Like the cancer motif, the film drops several religious allegories early on, only to immediately drop this angle to look at the pretty visuals. And then, right when you’re about to forget that was ever a theory, the film titled Annihilation features a close-up on a metaphorical Four Horseman of the Apocalypse. Wow. Subtle, guys. I get the feeling that Alex Garland, like a less-talented Terrance Malick, started out trying to make an artsy, soulful film, only to get caught up with the visuals and suddenly veer towards making a pulpy sci-fi romp. However, the problem with that is by hiding the fact you have no art with a bunch of pulp, you create some strange hybrid that has a foot in two worlds it never truly belonged in. Take, for example, the team of scientists. The reason that they’ve set up this all-female team of scientists, as explained in the film, is because the women have a greater capacity for nuance. They are more likely to focus on the science and the collection of data than men, who tend to solve things by blowing sh*t up. That’s an interesting angle, and one worth exploring. Except the minute the women enter the Shimmer, they immediately start blowing sh*t up. Like, from the get-go. And thus, the second half of the movie feels like a slasher film, alternating between a member of the team dying and a character shooting everything that moves. So much for nuance.

Then there’s the concepts that seem to be important, but never really come to fruition. There’s a nice little speech about humanity’s nature to self-destruct, and the final shots of the film seem to imply that this is a major theme, but we never really understand why this is important. Similarly, we learn that everything in The Shimmer comes down to refraction. That’s a really neat concept, and one that holds the key to understanding this film. Unfortunately, it is never made clear why refraction is important. The film seems to want to rest on its laurels and shout at any question we have the answer “Refraction!” For example:

And so on. Garland tends to introduce themes without explaining why they’re important. This is ironic, as the film also has a nasty habit of explaining too much about the world-building. There is an incredible scene involving a bear that the group encounters that feeds on fear. It has already devoured one of the group, and its growl is the sound of their compatriot dying. That is an incredible visual, and one that doesn’t need an explanation. Unfortunately, the very next scene features the characters explaining every detail, scientific fact, and metaphor present inside the bear, basically ruining the entire mystery (and thus, the coolness) of the bear. It’d be like in 2001 if, after touching the monolith, one of the apes turned to another ape and declared, “It’s a metaphor for the evolvement of humanity! Whenever we touch it, we leap forward in the evolutionary cycle!” Yeah, thanks, Ape-Man, half the fun is trying to figure out what it means before settling on “It looks cool.” That time could have been spent fleshing out the themes that the filmmakers so lazily tended to ignore. And don’t get me started on the ending, which is incredibly cool to look at, but neither I nor anyone I’ve spoken to about this film can figure out what the hell was going on.

It’s really a shame that everything story-wise was so jumbled, because the film itself is a real spectacle to behold. The opening credits, featuring the creation of The Shimmer, are incredibly gorgeous, and set a proper tone. An early montage (that turns into a leitmotif) involving Crosby, Stills, Nash, and Young’s “Helplessly Hoping” is arguably the greatest scene that Garland has ever done, creating a little subplot about grief, loss, love, and nostalgia. And everything inside the Shimmer is truly masterfully handled. Garland has a clear handle over the technicality of the project, finding beauty in the colors of the new world as opposed to the dull greys of normalcy. The multicolored flowers are captivating, and a shot of a mutilated skeleton is somehow grotesque and beautiful all at the same time. The score creates a folksy naturalism that feels unsettling when juxtaposed against the film’s violent reality, and there are a series of close-ups, including a shot of a piece of paper and a visual motif of glasses of water (one of which involves blood), which imply refraction (I guess) and rebirth. As mentioned above, the sequence involving the bear attack is truly masterful, and a late death scene is absolutely gorgeous to behold (as odd as that sounds). Hell, I even thought the convoluted flashbacks-inside-flashbacks framing device worked most of the time, even though it didn’t really serve a purpose beyond looking really cool (although looking cool doesn’t make you cool). As a technical achievement, the film is really quite something to behold. I’m just disappointed its main heft was so tortuous.

The cast itself was something of a mixed bag, although most of the cast members were game for the material. Natalie Portman is strong in the lead role as Lena, creating a complex, intelligent character out of something of a closed book. Meanwhile, Isaac doesn’t really have that much to do, but he does manage to prove that he has chemistry with literally everyone – every scene involving his relationship with Portman feels real, natural, and loving, adding a complex caveat to their struggles. Meanwhile, Jennifer Jason Leigh is making choices with this performance, and unfortunately for her, this is the one time where those choices don’t work. And Tuva Novotny is decent, but unmemorable as Cass Sheppard. Which brings us to Gina Rodriguez and Tessa Thompson. Rodriguez and Thompson are incredible in this film, with the former bringing a hypersexual, motormouthed energy in her performance (if this were Aliens she’d be Bill Paxton) while Thompson brings the depth and nuance we’ve come to expect from her. Both performances are great and detailed, and quite frankly this film doesn’t deserve them.

I keep thinking of the final scenes of this movie. Without spoilers, there are a few lines that lean heavily in the direction that the overall message is “None of this matters.” And while I would love to see a film that’s intentionally complicated with the message of “This is all nonsense and you’re dumb for analyzing it,” I think that Annihilation mostly leans the other way. Alex Garland has crafted a gorgeous science fiction film that didn’t know what it was trying to say, and thus rambled incoherently for an hour and fifty five minutes. I’m not saying it should have had all the answers. I’m not saying that I wanted it to have all the answers. I just wish that it had known what the damn question was going in. It’s certainly not the worst film you’ll ever see. Hell, I doubt it’ll be the worst movie this month. But if the director didn’t care enough to finish his own thesis, it’s hard for me to care about it either. And it leaves the film behind to rot because of it.