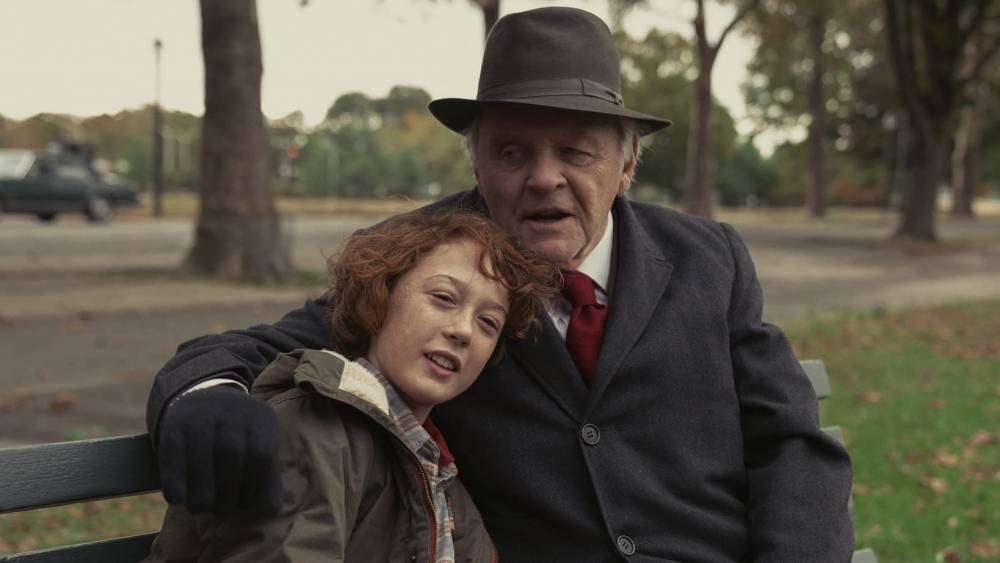 I’m starting to suspect that James Gray really hates his parents. Three years after his intriguing Ad Astra explored his complicated relationship with his father, Gray has returned with Armageddon Time, a semi-autobiographical look at his childhood, and all of the sociopolitical themes associated with the era. It’d be a lie to say that Gray fails to raise interesting points about class, race, religion, and parental shortcomings, but it would be equally dishonest to say the film made any salient point in a coherent manner. Armageddon Time is an unbearable example of navel-gazing, mostly letting Gray wallow in self-loathing than mining for anything deeper.

It’s the fall of 1980 in Queens, New York, and Paul Graff (Banks Repeta) has just started middle school. He is the youngest child of Esther (Anne Hathaway) and Irving Graff (Jeremy Strong), two first-generation Jewish immigrants enjoying a middle-class upbringing. They are good liberals, teachers and electricians who fight for their unions and scoff at Presidential candidate Ronald Reagan. However, they are equally troubled by their son’s passion for art – a useless hobby, they feel – and his penchant for troublemaking with Black student Johnny (Jaylin Webb). As Paul tries to navigate the prejudices that surround him, he slowly comes to terms with both where he comes from and the broken world he’s entering.

Armageddon Time is, at the very least, an interesting film on a thematic level. While filmmakers like Greta Gerwig, Kenneth Branagh, and Steven Spielberg have crafted nostalgic looks back at their upbringing, however flawed, Gray has crafted a wholly unglorified view of the past, a spiteful look dismantling all the myths we tell ourselves about our country – and the foundations of issues still faced today. The 1980s were an era of the ever-present dog-eat-dog mentality, where race and class divisions were sewn to keep the toxic system in place. Minorities were pitted against each other to keep them from questioning the broken system, and no one manages to escape it. The Graffs view themselves as proper liberals who scoff at and loathe candidates like Ronald Reagan, yet it’s hard to differentiate their views on race, on class, on everything, from the candidate.

But here’s the thing: while Gray is deconstructing myths about our very-recent-pasts, he’s not doing so in a way that’s challenging. He’s simply reiterating the same points people have made time and time again, all while drawing not-so-subtle parallels to the world of today. When he shows Reagan on TV complaining about how the “Sodom and Gomorrah” America will bring about “Armageddon Time,” he does so in a way to say “See? Everything’s the same!” There’s no nuance in his analysis, no subtlety, even though he seems to think there is. Hell, he’s so unsubtle, he makes sure we know that the private school he was forced into was funded by the Trump family (including a very good Jessica Chastain as Mary Trump). Even if it all actually happened, it’s so heavy-handed, there’s no room for the metaphors and allusions to grow.

All of this is made more challenging to watch thanks to the utter disdain Gray holds for his family. The film might as well have been titled “I Hate My Parents.” Everyone is the worst. Everyone screams, utters outright racist remarks, and barely seems to like each other. That’s not to say such a setup isn’t potentially entertaining – as the film claims to explore Jewish households of the era, one would point out last year’s Shiva Baby as a prime example of this scenario done well. But where Shiva Baby succeeds is the understandable, redeemable nature of every flawed character.

Here, no one is redeemable. The aunts are racist, Esther simply screeches, and Paul is an unlikeable sh*t. There’s a dinner sequence that is the most unwatchable moment of any film I’ve watched in all of 2022. It is poorly shot, poorly staged, and features every character shouting at the top of their lungs for no discernible reason. They are loathsome. The only time any of this is explored with any sort of stagecraft or nuance is the moment where the father, seen before as something of a dorky technician, proceeds to beat the ever-living sh*t out of his son, in a sequence staged with distinct similarities to The Shining. At least this has some thematic and psychological understanding of film as a medium.

Yet none of this comes close to Armageddon Time’s greatest failure: its handling of race. A major theme in Gray’s narrative is the way class and the system pit minorities – here Black families and Jewish families – against each other. And occasionally, Gray does this in surprisingly nuanced ways. It is noticeable in the first act that the no-nonsense teacher is harsher to Johnny than he is to Paul. And in a subtle rebuke of feel-good clap-trap like the climax of Belfast, one scene features Esther delivering a seemingly anti-racist monologue that instead only reveals to viewers how racist she actually is.

Yet as the film goes on, it becomes clear that Gray has nothing to say about race relations, other than “Sh*t’s bad, guys.” And he does so by allowing Paul to nobly benefit from the horrific traumas inflicted upon poor Johnny, who immediately becomes a Symbol and less of a Character. To paraphrase Bo Burnham, Gray is only capable of viewing race and class relations through the myopic lens of his own self-actualization. Someone was wronged here, but it only matters because Gray feels super guilty about it, you guys.

In fact, it is such a poorly-veiled analogy, filled with such loathsome caricatures of both the Jewish and Black experiences, I at one point stopped and wondered if the entire project was funded by Kanye West. I hate resorting to a topical reference in a review like this – much less to make an offhand joke – but it’s hard to ignore the pompous artist’s issues when the film is putting the very struggle on the big screen, in equally two-dimensional fashion. The film’s entire purpose is to show Black people’s suffering at the hands of the most unbearable Jewish characters ever put to screen, and while it was hardly Gray’s intention, it’s hard not to see this as a vile interpretation of both minority groups, regardless of the system’s obvious interference.

Like the rest of the film, the acting does little to provide audiences any emotion outside of “disdain.” Banks Repeta gives one of the worst child actor performances I’ve ever seen, running around screeching for two hours and substituting emotion with volume. I’d like to say Webb does a better job (he’s certainly quieter), but he is barely a character – he’s mostly just there for Repeta to inflict his nightmarish personality upon. I suppose all the actresses did a fine job – Tovah Feldshuh is always a bonus, Chastain delivers her aforementioned monologue brilliantly, and Anne Hathaway does her best with what she’s given. Oh, and Andrew Polk is surprisingly, enjoyably naturalistic as the school teacher.

But honestly, if there’s anything that redeems this film from its own demonic forces, it’s the performances of Jeremy Strong and Anthony Hopkins as Paul’s father and grandfather, respectively. Strong gives a powerful, nuanced performance as Paul’s father; often dorky, yet terrifying when his anger shines through. Strong’s trademark overacting (often a bad thing, yet always a powerful weapon in Strong’s talented hands, akin to Pacino) matches a larger-than-life father figure, giving a soul and darkness to a two-dimensional character. As for Hopkins, he gives a master class in naturalism as Paul’s grandfather. Every line, every movement, every emotion feels real, even the over-the-top monologues about hate and racism. Hopkins is one of our greatest actors, and this is a different film whenever he’s onscreen.

Armageddon Time is self-serious navel-gazing of the worst order. There was certainly plenty of opportunity for Gray to make a great film here. The idea of middle-class relations breaking down during Reagan’s 80s due to self-sabotaged racial division is wont for interrogation. Yet despite an interesting topic and stellar performances from Strong and Hopkins, Gray cannot overcome his own narcissism, painting a tragedy about a young Black man f*cked by the system as performative mea culpa. In trying to atone for past sins, James Gray has instead placed himself on a pedestal, and gives us a boring, aggravating glimpse at everything wrong with society and politics.