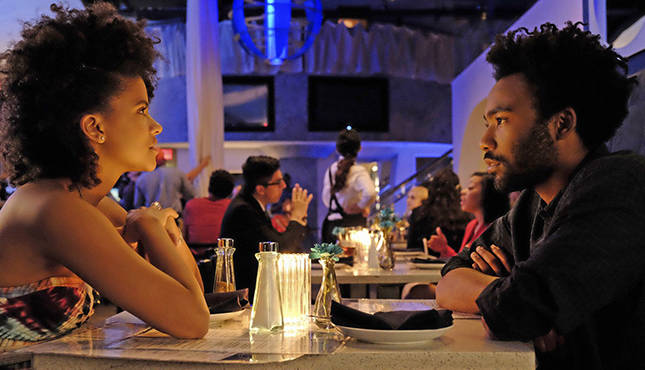 It’s only had two episodes, but Atlanta has already secured itself as one of the best new shows of the season, and maybe on of the best shows on TV right now. While “Go For Broke” never quite hits the thematic level of “Streets on Lock,” it still demonstrates a level of wit and cultural relevance to make for classic TV comedy.

The episode opens with a broke Earn (Donald Glover) trying to buy himself lunch despite his severe lack of money. He walks into a McDonald’s and orders the Kids’ Meal, embarrassed that it has come to this. However, his embarrassment turns to anger when the manager tells him that you have to be under fourteen to buy a Kids’ Meal. Despite his numerous attempts to point out the illogical nature of this strenuous vetting, he is turned down time and time again, and further embarrassed by her. He finally settles on a cup for water, which the woman smugly gives him. However, Earn gets the last laugh, filling it with orange soda, shushing a custodian as he sneaks out the door.

This opening sets the tone for the entire episode, and establishes the themes on display: the fear of going broke during your quest for success and immortality. When we first meet Earn after the cold open, he is sitting with Paper Boi (Brian Tyree Henry) and idiot savant Darius (LaKeith Stanfield, who may be the greatest character of his kind since It’s Always Sunny’s Charlie Kelly). Earn laments the fact that he won’t be making enough to support himself on his next paycheck, and Paper Boi (from now on referred to as “Alfred,” his real name) mentions he could sell drugs. Earn laughs, only to realize that his cousin is serious, and Darius pulls out his gun out of a cereal box, ready to prepare for an upcoming deal. Earn tries to talk him out of it, warning him it could ruin his career, but it’s too late-Alfred needs the money. Knowing that losing Paper Boi is to lose his hope for the future, Earn reluctantly leaves him with a “Try not to die.” Alfred reciprocates with “Every day.” It’s a poignant moment, looking at what people stoop to in order to support their art, the inevitability of living in a poor neighborhood with few options, and the risk that African Americans live with on a day-to-day basis. And right when you think that the show has taken a dark turn, Darius calls out, “Yo, I lost a bullet in here, so careful eating!” It’s one of the dumbest lines I’ve heard on television in years, and Stanfield’s earnestness sells it 100%.

Earn returns home, reeking of weed, to a disgruntled Vanessa (Zazie Beetz). She’s angry that Earn spends his time couch hopping and smoking weed, not taking his future seriously, and not caring about his daughter. The argument turns into loving bickering, and Earn promises to make it up to her by taking her out to a nice dinner the following night. She accepts, and they fall asleep. Unfortunately for Earn, his total paycheck is $96, meaning that in order to support himself until the next one, he can’t go above $60 at dinner. Panicking, he calls his friend from work, who advises him to take Vanessa to his favorite restaurant, which serves Happy Hour specials all night after 7 pm (much to the chagrin of the girlfriend sitting next to him). Earn takes him up on the offer and drives Vanessa to the restaurant. Immediately he begins to worry, as valet is $10. He takes the car across the street to a lot run by a kindly homeless man waving a glowing stick. The man explains to them that it isn’t a real lot, it’s just a place to temporarily park, and for $6 he will run into the restaurant and warn you if the tow truck is coming. “Look, this stick is just a lightsaber,” he explains, showing them his Luke Skywalker toy. Vanessa is appalled, and despite Earn’s pleas, insists he use the regular valet. He’s down to $50.

Meanwhile, Alfred and Darius prepare for their deal with the Mexicans that evening. They double check their guns and debate if it is weird to call their guns “Daddy,” which leads to a debate on if it is weird for girlfriends to call their lovers “Daddy,” before finally heading out for the sale. As they leave, Darius suggests handcuffing the briefcase to his wrist, to make it look more official. They arrive at the predetermined location, only to have a truck pull up to inform them that there’s been a change in plans. They follow the truck deeper and deeper into the woods, to the trailer park base of the buyers. As they arrive, Darius realizes that he’s forgotten the key to the briefcase, rendering the drugs useless. They plan on informing the buyers, but as they climb out of their car, they witness the gang pulling a bound, stripped, and weeping man out of the trunk of the main trailer. They give him his clothes back and tell him to run into the woods. To the horror of Alfred and Darius, and the surprise of anyone who didn’t watch The Battle of the Bastards, the leader pulls out a hunting rifle and begins to fire at the prisoner, hitting him on the third try. Alfred and Darius frantically search for a spare key before being invited inside the trailer. Once inside, the tension begins to build as things move at an oh-so-slow pace. Things jump frequently between hope and despair for our two drug dealers, as every time something goes well for them, like one of the gang leaders being a huge Paper Boi fan, something bad happens, like Earn calling and diminishing the buyers on speaker phone. Finally, Alfred admits to the killers that they’ve lost the key to the briefcase, and as the show fades to a commercial break, the leader of the gang tells him, “Well I guess there’s only one thing to do about that.”

Meanwhile, Earn is horrified as he learns from an overly peppy waitress, that the Happy Hour menu is no longer in effect. In one of the best comedic scenes of the year, the waitress unleashes a string of upsells, insisting on multiple courses of the most expensive meals, whether or not they were requested, and dropping phrases like “market price” and “properly prepared lobster” with a flourish, to Vanessa’s wonder and Earn’s horror. In fact, the only thing more humorous than the waitress’ sales pitches are Glover’s eyes, growing wider and wider as the scene plays out, until they’ve reached impossible proportions. As the waitress leaves, Vanessa calls him on it, stating, “You’re doing that weird sad boy face again,” which Earn counters with “That’s just my face.” The two then begin to discuss their individual quests for wealth and happiness. Both of them have dreams that are frowned upon by the other, but both want the chance to pursue them. Earn sums up these desires in his statement, “There’s a process to being happy. I don’t know {what mine is}, but I want to find out.” It’s a touching comment on trying to follow your dreams, no matter the risk, no matter the fears, no matter how much you’ll suffer just to be happy in what you do. It’s the perfect summary of what this show’s been about across three episodes. Unfortunately, it can’t last, as the bill comes out while Vanessa’s in the bathroom. The waitress offers dessert, which is roundly refused by Earn. However, she insists, and goes to get the menu. This sets Earn over the edge, and he begins hurling profanities at her, ending with the perfect, “Stop upselling me on sh*t!” The appalled waitress leaves the bill with a mixture of shock and glee, the latter explained when poor Earn looks down and mutters a slow, drawn out, “F*ck.” He calls up his cousin to get a loan of ten dollars to pay for the meal. Unfortunately, this still isn’t enough, as Vanessa sees his tip and calls him on it. To be fair, while the waitress absolutely deserves it, Vanessa’s argument of “What, it isn’t enough that she already makes less than you ‘cause you got a dick?” is a strong one. The two leave as the homeless man with the lightsaber approaches a well-dressed white businessman to tell him his car is about to be towed, sending him scrambling out to the lot. Damn, that’s the perfect callback.

We return to Alfred and Darius as the walk out of the trailer, laughing to each other. The buyers explain, “So we’ll just keep our money, and you can keep the briefcase.” The two leave on good terms, but Alfred and Darius are clearly shaken by the experience. Meanwhile, Vanessa and Earn return home from their date, and Vanessa immediately makes a joke about rapping being for kids. After a long day punctuated by the anxiety of having absolutely no money, Earn snaps, and begins to mock her dreams. A hurt and angry V slams the door in his face. Realizing he screwed up, Earn tries to defend himself through the door, explaining to her that he thinks that Paper Boi could be a real sensation, and that he may actually be able to provide for his daughter. The scene then takes a serious turn in quality, as Earn remarks “If you can’t [support me] out of love for me, do it for her.” It’s a false note from an otherwise realistic show, and it pained me to see it stoop to that. Of course, I should never have doubted Glover, as Vanessa immediately throws open the door to inform him, “That’s some dumb sh*t. That’s dumb sh*t, Earn,” before walking away. A forlorn and weary Earn walks out to the porch, where he pulls out his cell phone and calls his credit card company, reporting his card stolen as we fade to black.

Once again, we got to witness the absolute joy of Donald Glover’s look inside growing up poor and striving for success. It’s an episode that transcends racial exploration, embracing a more universal tone than the first two episodes, but it never loses its culture, and for the themes it’s working with here, it’s to its benefit. Sure, it’s never as sharp or as pointed as the first two episodes, but it’s got some bite to it, and some humor, and it’s secured itself as must see TV for anyone who has embraced the Golden Age of Television.