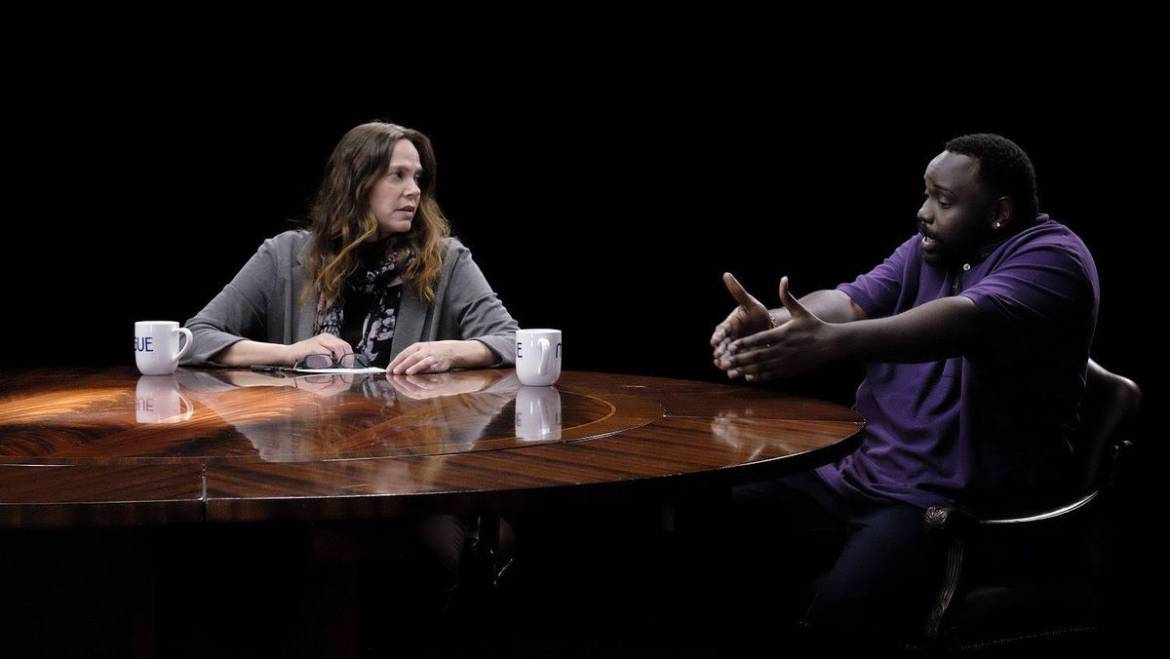 There are several types of humor. There’s dark humor, like Fargo, and slapstick, like The Marx Brothers, satire like Dr. Strangelove and farce like Some Like It Hot. Each one requires a certain panache to pull off properly, but few are as difficult as absurdist comedy. I’m not talking about your usual Adventure Time absurdist humor-I’m talking all-out, bizarre-o Lynchian anti-humor. The kind that Andy Kaufman mastered in lip-syncing to only one part of “The Mighty Mouse Theme,” and that put Tim Heidecker and Eric Wareheim on the map. It’s funny because it’s not only not funny, it’s downright bizarre, defying all sense of logic and good taste. I’m not sure if the newest episode of Atlanta, “B.A.N.” actually meets the lofty expectations the style requires, but damn it, did Donald Glover try. And that’s fascinating enough as it is.

The episode is yet another bottle episode, focusing solely on Paper Boi (Bryan Tyree Henry) as he makes an appearance on Montague, a talk show on the Black Americans Network (B.A.N.), to address a recent controversy where he tweeted about finding it “weird” to be attracted to Caitlyn Jenner. While he thought it would be a quick appearance to explain his stance, he soon finds he’s in a two-on-one against Montague, a black man who seems to hate all black people, and the other guest, Dr. Holt, a white woman who’s goal seems to be to rip down rap music as a sacrifice to ending homophobia and transphobia. While Paper Boi insists his tweet was only a reference to this one specific case, Montague immediately asks him if he’s “always been this transphobic.” Paper Boi is further confused when Dr. Holt decides to take his lyrics and say that’s betraying his own music due to “clear references to gender fluidity.” Exasperated at his views and music being twisted and explained to him, Paper Boi finally announces to the room that his only goal in life-why he writes music, and why he appeared on this show-is to “get paid.” However, Montague informs him he’s not being paid for his appearance. Horrified, Paper Boi tries to scream at an off-screen Earn, and as he realizes he’s stuck on camera arguing over his views, Montague decides to head to a commercial break.

When the commercial break ends, Montague announces a human interest segment, which is an interview with a young man who comes out as transracial-that is, he realized that he is a black kid who identifies as a 35-year old white man (very specifically a 35-year old white man). He came to this realization when watching a movie and wondering to himself, “Why am I not getting the respect I deserve?” before realizing that it was because he was actually white. He’s dropped the name “Antoine Smalls,” demanding to be called “Harrison.” He explains that his family doesn’t respect him, because “They don’t realize that race is just a made-up thing. They just see labels.” He begins to wear Patagonia and black leather belts, drinking IPAs, and watching Game of Thrones. He goes up to police officers on the street talking to African Americans and announcing “He did it. I’ve never seen him before in my life,” before walking up as the man confusedly notes, “I called him!” He explains that everywhere he goes, black people nod at him like he’s “one of them,” causing him pain because “I’m not one of them.” It’s revealed that he will be undergoing a procedure for “racial transition,” which his doctor describes as “Absolutely possible-but he’s gonna look weird.” The segment ends with an awkward pass back to Montague, and then 40 straight seconds of nodding. I had to check the channel for a second to make sure I wasn’t watching Tim and Eric, it was so bizarre.

After the next commercial break, Paper Boi is still arguing with Dr. Holt over his statements. Dr. Holt claims that the retaliation against his tweet is just chickens coming home to roost over long-imbedded bigotry, but Paper Boi points out that this is the entire point of his music-to fight bigotry against his people. He begins to angrily swear, and Holt claims this as the reason you can never have an intelligent debate-ignoring the attacking and confrontational demeanor she and Montague have possessed from the beginning. She furthers her attacks, claiming that his lack of a father figure makes him hate transgendered people. Having reached his breaking point, Paper Boi chooses to lay out his argument logically-he has no problem with transgendered people, he doesn’t feel the need to celebrate Caitlyn Jenner, as she is just doing what rich white men have always done-whatever they want. It’s an interesting argument not against transgendered people in general, but one specific case. He also points out that there’s a demand for him to be tolerant, yet there is still a lack of tolerance for people like him. Holt’s final argument comes about why he gets to say these things, and Paper Boi just points out freedom of speech. It’s a thoughtful and intelligent debate, laying out a defense of hip hop’s flaws while not necessarily agreeing with them, resulting in one of the most intellectual discussions I’ve ever seen on any issue. And it comes from a sitcom that featured a black kid named Harrison thinking he’s a 35 year old white man less than ten minutes earlier. And what’s even more shocking: Holt agrees. They find common ground and settle their differences. This scares Montague, as the entire point of his show is to get guests to gang up and argue. He begins throwing out accusation after accusation at Paper Boi, each one rejected by the duo. Flustered, Montague cuts to another commercial break.

Oh, did I mention that half the show is a series of fake ads that begin and end each commercial break, designed to “appeal” to an African American audience? And some of these are real products-there’s ads for Arizona Lemonade, the Dodge Challenger and Swisher Swills. If I had to pick the three best, I would say they would be the Swisher Swills ad involving the users cutting open the cigarillo, scraping out the tobacco, and saving the rolling papers, an ad for a cult that’s so bizarre it delves into Too Many Cooks territory, and an ad for a cereal called Coconut Crunchos that I really want to talk about more. The ad is designed like your average Trix or Cookie Crisps ad, where an animated wolf tries to steal the kids’ cereal. The kids trick the wolf, and begin to say their catchphrase about Coconut Crunchos being for kids-when the Wolf (dressed and speaking like your average African American) is tackled by a police officer, has his throat kneeled on, and is repeatedly told to “stop resisting.” The kids, horrified, offer to share their cereal, to keep the wolf from being repeatedly beaten, but the officer scolds them, shouting that “Coconut Crunchos are for kids! You said it yourself!” The kids, getting angry, begin videotaping, forcing the officer to pull his gun. The ad ends before it leads anywhere, but good God did things get dark there for a second. It’s such an odd but brilliant twist on the classic advertisements, and I have to give credit to Glover for coming up with it.

The final commercial break ends, and a calmed down Montague announces the final segment: a live interview with Antoine Smalls, aka Harrison. A live satellite feed brings us to Harrison, who is now in a plaid shirt, giant glasses and a blonde wig. It’s one of the funniest visual gags all year. And Paper Boi agrees. As Harrison is interviewed, Paper Boi can be heard laughing uncontrollably, slamming the table in frantic fits. “You look like Draco Malfoy!” he declares, before pulling out his phone and taking a picture. This is all done to Dr. Hunt’s horror. “Nice tolerance,” she says bitterly. Harrison brushes it off, saying, “The black community is not that accepting of racial diversity.” I’m going to let that one sink in for a minute. However, just as they’re about to team up three-on-one against a still-hysterical Paper Boi, Harrison reveals that he’s against gay marriage. “That’s an abomination! Marriage is between a man and a woman!” he declares, to Dr. Hunt’s horror. As she presses him, he reveals, “Well, I didn’t have a problem with it as a black man, but as a white man, I hate it.” Paper Boi goes wide eyed, and continues losing it as Dr. Hunt angrily points out that he’s committing the very discrimination that he was just complaining about. Montague signs off as Paper Boi continues laughing and comparing Harrison’s look to the “fifth Beatle,” and Holt looks resigned to her fate.

That was one of the weirdest episodes of television I’ve ever seen. It’s like Tim and Eric directed the Rick and Morty Interdimensional Television episode, and made it all about race and gender. And I mean all of this in a good way. And in between these surrealist visions sits an in-depth look at hip-hop, misogyny, race, gender, transgender rights, P.C. culture, and the cult of celebrity. I don’t know if all of it worked, but the fact that Glover tried is impressive, and deserves praise. And that’s exactly what I’m going to give it.