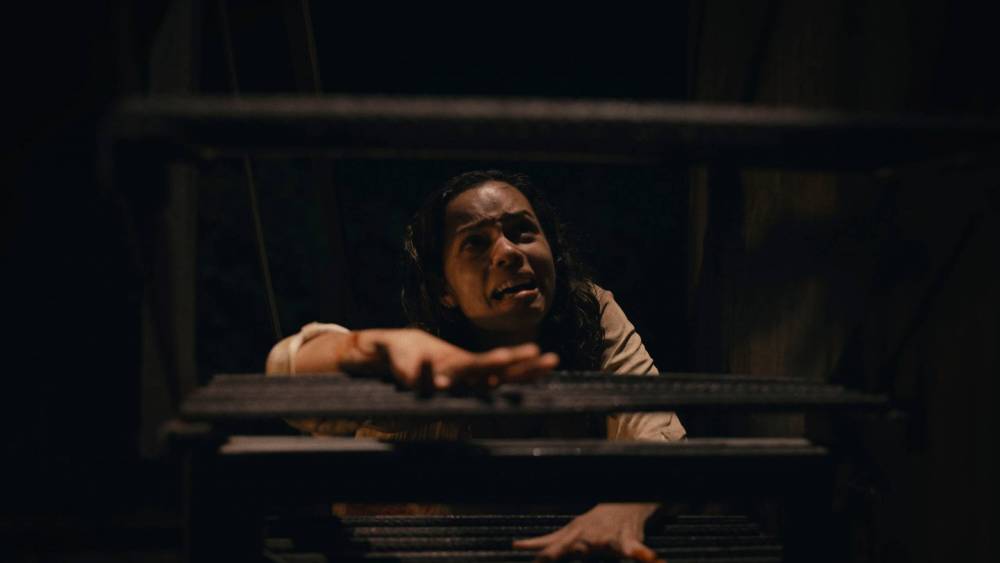 How the f*ck does one review Barbarian? I mean this in every sense of the question. How does one review Barbarian, the first solo film from Internet comedian Zach Cregger, without spoiling the plot? How does one even describe the plot of this film, even if you could describe it? And even if one were to exclude the plot entirely from the review, how do you even describe this film at all? It might actually be the nastiest, most disturbingly wild horror film I’ve ever witnessed. And while I’m still trying to process the nasty, taboo images I witnessed at last night’s screening, the only litmus test I can muster is that I haven’t smiled and squealed and covered my eyes that much at a movie in a long time.

Doing my best to avoid any spoilers, the simplest description of Barbarian’s plot is this: Tess Marshall (Georgina Campbell) has rented an AirBnB in Detroit while she undergoes a job interview with a famous documentarian. Upon arriving, she discovers that the house has been double booked, and it is currently occupied by Keith Toshko (Bill Skarsgård), a strange man who seems to have all the right attitudes and answers for everything. Ever the smooth talker, and the perfect gentleman, Keith convinces Tess to stay the night – she can take the bed, he’ll take the couch. Things just get worse from there.

Barbarian works because Cregger’s plot veers so far into batsh*t insanity that you can’t wait to see where it goes next. His plot is structured in such a way as to not only increase the abject terror, but to create jokes as he dives headfirst from subgenre to subgenre, allusion to allusion. His first act may as well be Hitchcock’s psycho, what with its misleading romantic comedy allure. Yet just when you expect it to double down on the 1960 classic’s twist, the film chooses to zag into Wes Craven territory. And just when you get a feel for Craven, it becomes a Sam Raimi film. And these new plots and scenes are broken up with interludes inspired by David Lynch and Tobe Hooper.

Perhaps Cregger’s best decision is to avoid leaning into the traits of the currently-chic “elevated horror.” While horror movies have always been about something, they have always worked best when the terror was at the forefront, subliminally marketing its themes to viewers watching through their fingers. Ever since Get Out revolutionized the game, horror has become more focused on the “message” – and therefore loses sight of its unsettling ambitions. Barbarian is not a dumb film – it touches on topics as varied as #MeToo, suburban malice, White Flight, gentrification, and the landlord/tenant relationship. Yet it never lets these themes overwhelm its main intention: to scare audiences sh*tless.

It also helps the film that Cregger is surprisingly assured behind the camera for someone who primarily directs comedy shorts. He sadistically lets sequences of abject terror go on several seconds longer than the average horror film, building the suspense to unbearable degrees. The cinematography is clean and smart, with the editing sharp – especially during one sequences where the film hard cuts from one of the year’s most frightening visuals to a dumbass Justin Long singing along to Donovan’s “Riki Tiki Tavi.”

And one can’t overlook the concepts that Cregger is providing to titillate the horror fans in the audiences. Twisting, turning secret tunnels, strange men chasing characters down the street who may be violent psychos or concerned citizens, and creeping doors that open on their own. It all works together to create a delightfully terrifying evening at the cinema.

In terms of the cast, there are really only a handful of characters, and I can really only go into detail on a few of them. Campbell is a strong, believable protagonist, filled with the appropriate amount of skepticism and wit to make her a fitting hero. One of her finest moments, in both acting and delivery, comes when she first locates a hidden room in the basement, immediately declares “Nope,” and proceeds to leave. Skarsgård, meanwhile, walks a thin balance between charming and menacing in his early scenes. I won’t spoil how the chips fall, but the first act hinges on how you feel and what you expect from Skarsgård’s Keith, and he keeps that balance perfectly throughout.

The film’s third lead takes the form of Justin Long, whose presence amounts to, both in and out of the film, “Wait, why the f*ck is Justin Long here?” Yet he is utterly perfect as possibly the dumbest horror movie character in movie history; he has the perfect douchebag dumb-boy face throughout his scenes, and an early moment where his idyllic life slowly implodes is perfectly played on his slowly-drooping face. Amongst the rest of the cast, Richard Brake has a creepy cameo, as does Jaymes Butler as the aforementioned homeless man, while comedian Kurt Braunohler has one scene that, while minor, serves as the fulcrum of the entire movie. He plays it perfectly.

Barbarian is a mental mindf*ck in every sense. It is nasty and funny and disturbing and shocking. Essentially, it is everything one wants a horror movie to be. I’m not sure if I ever want to see this movie again – not because it isn’t good, but because it is so disturbing, even in its gleefully evil ambitions. What I can tell you is this: you should see this movie. You should see it with a crowd – whether friends or an auditorium, depending on how safe you feel. And you should laugh and clap and cheer along, as my theater did (especially when the Detroit-based crowd heard the film takes place in the Brightmoor neighborhood). This is a communal experience; I advise you take part.