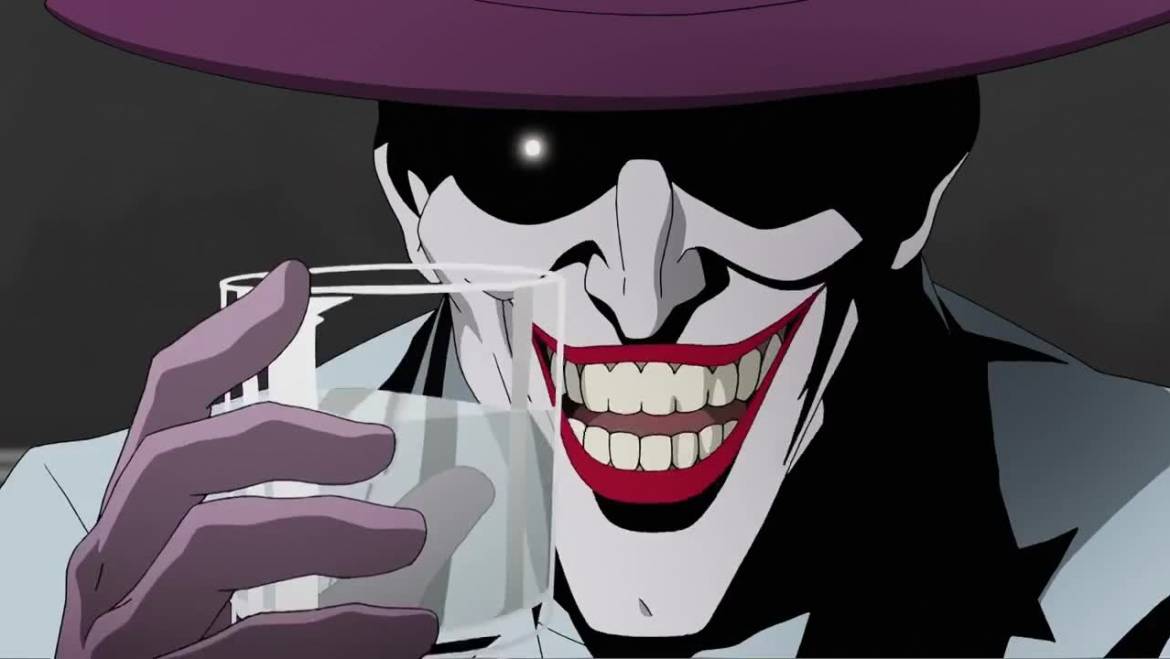 Never in my life have I seen a film so clearly divided into two halves of differing greatness. While fans of Batman: The Killing Joke will certainly love the vastly superior second half of the film, they must first sit through a 30-minute prequel (exactly half of the entire product’s running time) that not only is insulting to the original material, it is offensive to film lovers in general.

Before I even get into a synopsis of the film, I need to establish this film’s biggest issue: it takes over half the run time to introduce The Joker, voiced by the astonishing Mark Hamill, in the one role that makes people forget about Star Wars. Introducing a villain halfway through the film is nothing new. I’ll draw comparisons to The Third Man to prove this point. There are a lot of comparisons between these two works: both films feature the dichotomy between the hero and the villain, the latter of whom takes all the glory with all the best lines. Both films don’t reveal their villain until the second half, in a brilliant show, where he begins to strain the audience’s view of morality with his own twisted and cynical view of the world around him. In truth, Hamill’s Joker and Orson Welles’ Harry Lime aren’t that different, and both are truly tour-de-force performances. However, there is one key difference between the two films in how it treats its titular character: he is established long before his entrance to the film. Harry Lime is the entire focus of the first half of The Third Man so that we understand why he is so significant long before he ever appears onscreen. The Joker seems tacked on to the film as an afterthought, which makes no sense because this is his story. Why would you make the main character an afterthought in his own story, especially when you have someone as talented and connected to the role as Hamill is?

Anyway, let’s focus on the story now. The film opens with Batgirl’s (Tara Strong) perspective, following her (unrelated) last case, where she is pushed to the brink by a crazed mob leader. All the while, she struggles with her feelings for Batman (Kevin Conroy, reprising his role from the Animated Series to great effect), her partner and mentor, whom she eventually has sex with. I’ll go into detail on why this is problematic later. After the end of this case, the film remembers that the Joker is supposed to be in this film, and it switches to his perspective, as well as Batman’s. After discovering a group of dead bodies, Batman confronts the Joker about the very real prospect of the rivals killing each other. Too bad that the real Joker has escaped, ready to unleash his manifesto on the world, in one of the most horrific displays in comic history.

There are several problems with this prologue besides being completely unrelated to the film’s message. The reason this opening was added was to flesh out the character of Barbara Gordon before the horrors that befall her at the hands of the Joker. Critics have often pointed to her controversial plotline as the ultimate objectification of women and a call for violence, and if looked at as a one-off (like a movie, for example), then rightly so. A more respectable fleshing out is needed, in order to help the film give Gordon her proper moment. So how do they create a female character worthy of stakes? They make her the f*ckbuddy of the male hero. That’s right; now, she doesn’t just serve as stakes as a victim-now she’s incentive for the male hero, all while she becomes even more expendable. Somehow, directors Bruce Timm and Sam Liu have taken a controversial plotline and made it not only controversial, but offensive. Throw in an unfunny sassy gay friend and a mediocre plotline, and you have 30 of the most unpleasant minutes I’ve seen.

However, once Hamill’s voice starts reading Alan Moore’s original dialogue (and trust me when I say Moore’s-most of the new dialogue from screenwriter Brian Azzarello comes across as ham-fisted and mediocre, especially when compared to Moore’s creations), you are looking at a great film. Hamill relishes in each sadistic line he utters, pushing himself from the maniacal clown he originally created into waters that as of this post have only been tread by Heath Ledger (I reserve judgment on Jared Leto for a later date). While the animation doesn’t always hold up to the original artwork, some of the images of the Clown Prince of Crime come straight from the original work, and they create one of the most frightening animated characters the world has ever seen.

This legendary portrayal is furthered by brilliant decisions by the directors (once they get their groove, of course), as can be seen in one key scene early on in the second half. In the scene, Batman gazes at his computer screen, trying to find a way to understand his bitter enemy, and reflecting on the hatred that can exist in men’s hearts. The screen he looks upon is filled with different images of the Joker, ranging from reinterpretations of classic comic covers, to images of Harley and a dead Jason Todd, to subtly animated renditions of scenes in 1989’s Batman and 2008’s The Dark Knight. These snippets remind the viewer of the wide reach that the Joker has in pop culture. He is truly one of the most terrifying literary villains, and this sequence drives this point home more than anything.

Of course, this wouldn’t be The Killing Joke without the infamous backstory of our villain, and Hamill really pushes his vocal abilities, channeling the naïve innocence of Luke Skywalker for his put-upon comedian, providing such empathy and catharsis you almost want to root for him, or at least hope he accepts Batman’s help.

Speaking of Batman, Conroy continues to prove his skill as Batman, putting a unique spin on the character by creating a figure that, it is heavily implied, literally thinks he is God. It doesn’t work in the first half (because nothing really does), but it kind of ties together in the second half, creating a God and Devil complex-two men who both have the same beginning, but two very different results. I would want no one else to play opposite Hamill than Kevin Conroy.

I have no choice when it comes to grading this. I’m going to have to give 3 grades for the film. The first is for the first half of the film, a poorly animated, poorly written, borderline offensive monstrosity. The second is for a brilliant, powerful piece of animation that emits its sadistic, yet hopeful take on the world across the screen. And the third is for the film as a whole: a jumbled mess, complicated and convoluted, ranging from excellent to exacerbating, and a film that I can only recommend half of to people.

Second Half: A-
Whole Film: C+