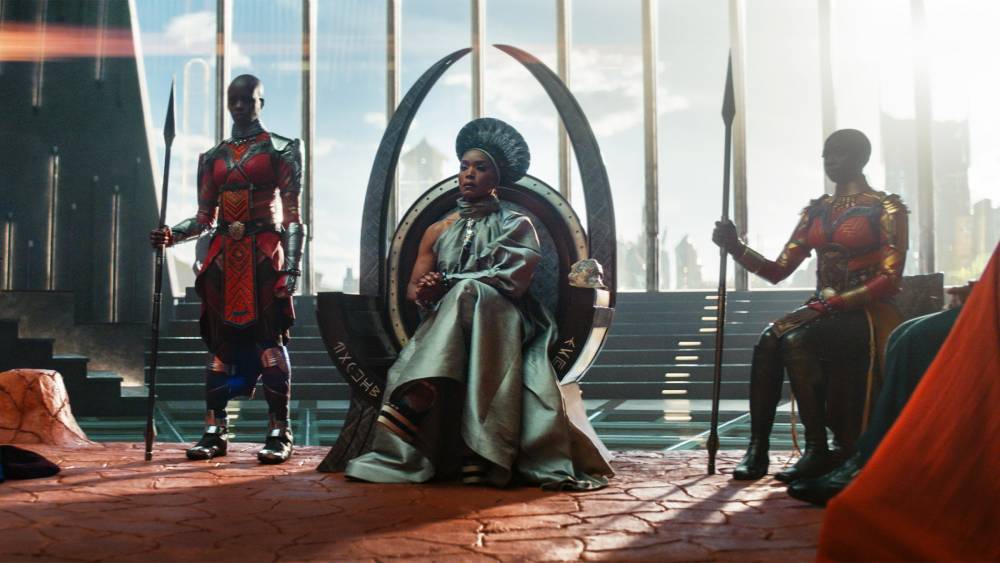 To say that Black Panther: Wakanda Forever had a cursed journey during its production is an understatement. It is expected to follow a billion-dollar success, the first superhero film to earn an Oscar nomination, without buckling to the pressure. Meanwhile, every single Marvel project to release since Endgame has fallen well under expectations (with the exception of No Way Home, which earned a pass on nostalgia). And if that weren’t enough, their star, the eponymous character, the unbelievably talented icon Chadwick Boseman, tragically died young due to colon cancer. Was there any chance this film could overcome the odds and succeed? Well, as long as a genius like Ryan Coogler remains behind the camera, the answer is a resounding “yes.”

King T’Challa is dead; cut down in his prime due to an illness that his genius sister, Shuri (Letitia Wright) could not prevent. In response to this sudden regime change, Queen Ramonda (Angela Bassett) faces challenges on all sides. Her daughter is shut off from the world, focused only on her technology. Rival countries like Russia, France, and the United States threaten aggression to seize control of Wakanda’s natural resources. And, as it turns out, Wakanda is not alone as the leading first-world nation: an undersea utopia called Talokan, equally evolved thanks to vibranium resources, and led by a winged warrior named Namor (Tenoch Huerta Mejía). And due to his justifiable anger at the surface world, Namor delivers the Wakandans an ultimatum: form an alliance, or prepare for war.

It is impossible to deny that Coogler has a firm understanding of how to make a film – especially one that emphasizes fun and action. The man simply cannot miss. Like its predecessor, Wakanda Forever is a visually stunning example of world-building, from the top down. Every detail, whether a callback to the first film or a new piece of lore dazzles and delights. Several single shots demonstrate the scope of both the Wakandan civilization and the new Talokan rivals, whether it’s the Dora Milaje dispatching a mercenary strike team with impeccable ease, Talokan soldiers scaling a massive battleship, or the striking notion of Namor’s army including a hypnosis strike team that lures soldiers to their deaths – an allusion to the myth of the siren.

All of this is accomplished through a team of unparalleled technical artists. Not only are these the best visual effects in the MCU in over three years (not one detail looks egregiously fake or flat), but every practical detail, from the fascinating character makeup designs to Hannah Beachler’s sets to Ruth E. Carter’s Oscar-winning costumes, just sucks you into this fascinating world. And it’s difficult not to be excited whenever Ludwig Göransson’s iconic, creative score blasts in the background. Now, it is worth noting that there are issues with new cinematographer Augutmn Durald Arkapaw’s compositions. Several scenes are lit so dimly, it is impossible to see anything that’s happening, in any context – Namor’s big reveal during a nighttime raid is so dark, you can’t even see him. And the film overutilizes slow-mo in a way the series never has before. But nonetheless, the technical prowess of this team, led by Coogler’s steady hand, is hard to ignore.

Lest you fear that Coogler would be unable to double down on the series’ weighty themes, the auteur continues to find ways to elevate his film beyond Marvel’s usual “it’s about grief, but not really” stories. Wakanda Forever continues to explore Wakanda’s precarious role on the world stage. Now that the world knows of their existence, they face existential threats, as countries like France and the U.S. complain to the U.N. that the superpower fails to share resources whilst black ops strike teams attempt to steal resources and governments discuss destabilization tactics.

Meanwhile, the thrust of the story involves escalating tensions between two similar nations that is far more interesting and fleshed-out than anything House of the Dragon accomplished in its first season. It all builds to a climax that’s easily the most exciting in a fantasy/sci-fi/superhero film since maybe Avatar – and yes, I remember Endgame. This is a visceral, weighty, interesting film, the kind of blockbuster we deserve as audiences.

It’s also worth noting that the entire ensemble brings their A-game every minute they’re onscreen. In fact, I’d argue that as a collective unit, the ensemble here may feel more lived-in and real than they did in their SAG-winning predecessor. Letitia Wright is excellent, full of rage and emotion and energy from the opening. She is so good, she will make you forget the irony that she is an anti-vax Christian playing an atheist whose mission is to bring vaccines to her people. She is a true-blue movie star, as is Winston Duke, who knows how to dominate a screen from beginning to end. Danai Gurira continues to delight as no-nonsense Okoye, whilst Lupita Nyong’o has an undeniable magnetism whenever she’s onscreen.

The two standouts, however, are Tenoch Huerta Mejía as antagonist Namor and Angela Bassett as grieving queen Ramonda. Essentially from the jump, Bassett controls this film, delivering every type of monologue imaginable with the power and clout of a performer of her status. Whether she’s expressing anger, power, empathy, or anguish, she commands this film with what may be the best performance a Marvel film has ever provided. As for Mejía, this is a star-making turn, much in the same way Boseman’s was in Civil War. He commands respect, feels righteous anger, and at times, may be more sympathetic than the Wakandans. He is an actor to watch going forward. Oh, and side note, any time Martin Freeman and Julia Louis-Dreyfus show up, that’s your cue to use the bathroom in this near-three-hour movie. They’re just here to drop MCU Easter eggs, completely useless to the plot.

Black Panther: Wakanda Forever is an example of good, clean popcorn-munching fun. It continues the tradition of smart blockbusters that are equally entertaining and intriguing. It is an elegy to a fallen icon, a celebration of his life and legacy, whilst still managing to titillate for a three-hour runtime. It saves a waning franchise from the brink of oblivion. But above all that, ignoring the stakes for a company or the mournful loss of a real-life hero and beyond, it’s just an example of good old-fashioned filmmaking, an epic actioner the whole family can enjoy. Ryan Coogler is now four for four. He deserves all the respect we can provide.