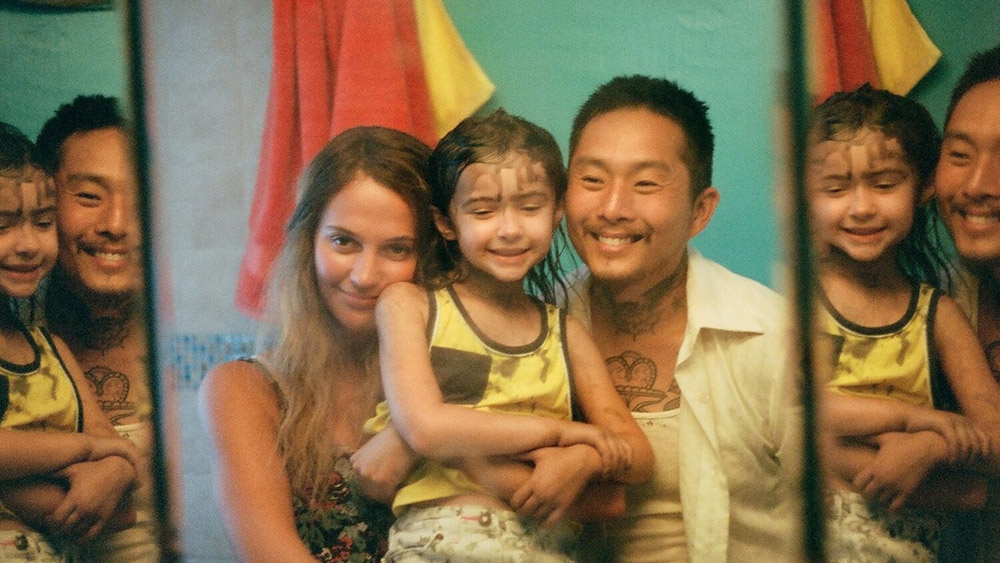 Blue Bayou could not have arrived at a more prescient time. When it was filmed and edited in 2019, it was before George Floyd and Elijah McClain forced police injustice to the forefront of the American consciousness. Prison reform was only beginning to become a talking point. And above all, while immigration and abuses by ICE were at the forefront of political debates and protests, the deep-seated problems associated with them had not yet become abundantly prevalent, and many Americans hoped the election would begin a long-needed rehauling (as of publication, the current administration has done little to reverse the human rights violations or fix the broken systems surrounding undocumented immigrants). So it is into this new, yet depressingly similar world that Justin Chon releases his newest film, a story of a man’s quest to keep his family together when bureaucracy and racism threaten to tear them apart. It’s a dazzling piece of filmmaking, and tremendously acted. It’s just a shame about Chon’s script, and his inability to understand subtlety.

Antonio LeBlanc (Chon) is an ordinary Louisiana good ole’ boy. After a stint in prison many years prior for his role in a motorcycle theft, LeBlanc has managed to turn his life around, working a steady job to support his pregnant wife Kathy (Alicia Vikander) and his young stepdaughter Jesse (Sydney Kowalske). However, after an encounter in the supermarket with Kathy’s police officer ex-boyfriend and Jesse’s father Ace (Mark O’Brien) and his racist partner Denny (Emory Cohen), Antonio finds himself wrongfully arrested. And not only that – he learns that when he was adopted thirty years ago from South Korea when he was three, his parents never signed the proper paperwork, meaning that Antonio will likely be deported. Strapped for cash and facing an entangled, broken legal system, Antonio must fight with everything he’s got to stay in the only country he’s ever known. For if he loses the court case, he will never be allowed to return, and will likely never see his family again.

The one undeniable truth present at the heart of Blue Bayou is that Justin Chon knows what he’s f*cking doing. From the jump, this is a gorgeously shot, expertly staged piece of filmmaking. Chon and cinematographers Matthew Chuang and Ante Cheng make the genius decision to shoot the film on 16 mm film stock, and the result is just further proof that there’s nothing quite like the grainy look of celluloid. The real hues of blue and green that make up the Louisiana swamps and suburbs possess a gritty realness that cannot be faked. Chon manages to perfect every single detail of the technical side of things, from the acting to the editing to the staging. And the simplicity in these decisions makes the extravagancies all that more exciting. There are several flashbacks that, while unnecessary for the plot, are amongst the most beautifully staged sequences you’ll see all year. And when Chon stages a diversion in order to craft a motorcycle heist, the film feels electric, thanks to smart cinematography and sharp editing. Bayou possesses the honest immediacy of the indie rule-breakers of the mid-90s, and it dazzles you into submission, almost like a magic trick.

Unfortunately, as abundantly clear as it is that Chon is a brilliant director, it is also abundantly clear that he struggles as a screenwriter. Almost from the jump, this is a ham-fisted, poorly written screenplay, worthy of eye-rolls at every corner. There are very few moments where the characters sound human, speaking almost exclusively in cliches, and it is painfully distracting in each and every scene. Antonio as a protagonist is often bafflingly stupid. It’s not that he makes bad choices that are understandable in his situation, or even that he makes dumb choices, a la Uncut Gems. It’s that he makes dumb choices that are also out of character. As much as he says that he wants to stay in the U.S., the only home he’s ever known, almost every action he takes says otherwise. This is painfully clear in the motorcycle heist sequence, which, despite great cinematography and editing, also features a character staying behind while his team leaves, then driving a cycle through a sea of cops with their guns drawn, and somehow, inexplicably not being shot.

Speaking of the police, let’s talk about them. While most of the characters in the film never evolve past two-dimensional stock characters – the random dying Vietnamese woman (Linh Dan Pham) whose only role is imparting wisdom to Antonio, the racist mother-in-law, etc. – the police here are another entity entirely. From the minute Ace and Denny show up, they are straight out of a 70s exploitation movie, speaking exclusively in racist cop cliches, spoken in HEAVY Nawlins accents. There is no nuance in this portrayal; no likability (not that this is necessary), no understanding, no thought whatsoever. The best thing I can say about either of them is that at least Ace is something of a two-dimensional character, and more blandly antagonistic. It’s certainly more interesting than what the film is doing with Denny. Emory Cohen, so brilliant and sexy in Brooklyn all those years ago, appears here as a caricature of a police officer, a cartoonish bloated oaf who appears only to imply that it’s just one cop who mucks up the system, that there’s nothing deeper or more complex to explore. It’s a poorly written role bogged down with a one-dimensional performance, and seeing Cohen’s name in the credits was a devastating blow.

Now, the film’s story does take some interesting turns worth noting, usually uplifted by the acting and filmmaking. Chon lays out Antonio’s struggles clearly and decisively from the jump, and most of the film’s best moments come when Antonio and Kathy sit in their lawyer’s office, trying to navigate a broken and overly complicated system. These are the moments where Chon’s message is best explored – he was adopted before citizenship laws were placed in effect, meaning he never would have known he wasn’t a citizen. Because he didn’t know this when he got married, their marriage license can’t be used to save him either. It would help if he had a higher paying job, to hire a more effective lawyer, but he can’t find work because of both his race and his criminal record. And because of these complications, each and every route the couple tries to take finds itself blocked off by insane bureaucracy within the system.

I always want to point out that, while not perfectly handled, Chon does seem to understand the complexities and nuances within a community like this. As it turns out, one of Antonio’s closest friends, and most reliable clients at the tattoo parlor, is an ICE Agent named Merk. Unlike the police officers Antonio is constantly confronting, Merk is a three-dimensional character, a member of his community that has complicated feelings about a career that he is naively proud of. I’m not sure the film wholeheartedly nails this portrayal, but by showing these nuances and complexities, it creates a more textured portrait of the situation at large. It’s just a shame this level of care wasn’t extended to Ace or Denny.

But while the film is pretty well-balanced throughout its runtime, balancing out the weaker story elements with strong acting and directing, that all goes out the window when we reach the third act. Holy sh*t does the film go off the rails towards the end. I have never, not once, seen a film botch its ending this terribly. The order of events is so convoluted, so out of character, and so egregious, it ruins the movie as a whole. Chon loads the ending with insane twist after insane twist, each executed solely by betraying the characters as established. Characters who don’t deserve it get redemption arcs, and characters who don’t get redemption are delivered earnest comeuppance – a comeuppance that makes so little sense, it seems solely created so that white neoliberals can pat themselves on the back and feel good about themselves.

And it worked – there were smatterings of applause during my screening in a moment that, quite frankly, should have been traumatic. It’s spoon-feeding to people who have been trained to expect a happy ending, as if voting a certain way will end all suffering, as opposed to continuing the same sh*tty system of oppression. I’ll give the film credit for having the balls to end honestly (in a well-executed sequence set to a heart-wrenching swelling orchestra), but it only comes after a dangerously close brush with Hollywoodization, and it is so painful to witness it destroys almost all goodwill the film earned up to this point.

Nevertheless, despite these frustrations with the writing and central story, I do have nothing but praise for the cast (other than O’Brien and Cohen, of course). Chon is a true powerhouse in the central role. He commands the screen with warmth and charisma, evoking similar reactions to Michael B. Jordan’s struggling dad trying to do the right thing in Fruitvale Station. He is oftentimes aided by Vikander, who does a very good job with some very bad lines. She is an emotional core to the film, her accent only wobbling when she has to tearfully deliver her lines. Oh, and she has a decent voice for when she inevitably has to sing “Blue Bayou” (you knew it was coming).

Young starlet Sydney Kowalske is an effectively cute child actor, and she nails a few key scenes that need some heavy lifting in order to work. Actor Vondie Curtis-Hall is phenomenal as Antonio’s put-upon lawyer, struggling to build an unwinnable case for a reluctant client, while Toby Vitrano and Lind Dan Pham perform effective work as Merk the ICE Agent and dying Vietnamese immigrant Parker, respectively. Geraldine Singer is fine, I guess, as Antonio’s racist mother-in-law, but if I’m going to praise a maternal figure in the film, it would likely have to be Susan McPhail as Susanne, Antonio’s foster mom who nails one key powerhouse scene. Like I said, it’s a strong cast, forced to do the Lord’s work with an unfathomably bad screenplay.

Blue Bayou is a frustrating example of when Hollywood rushes a message movie without any thought for execution. These are important discussions to have; discussions that are likely to grow more and more complicated in the coming years. It is possible that audiences are moved by the strong directorial style and emotional performances. I would love for that to be the case. But with a script so ridiculously overwrought and mishandled as this one, I can’t imagine many audiences connecting with the material or the themes on any level. It lacks the immediacy of Fruitvale Station, the honesty of The Visitor, or the intelligence of A Better Life. I am excited for Justin Chon’s next film. I just hope he elects to hire a writer when that day comes.