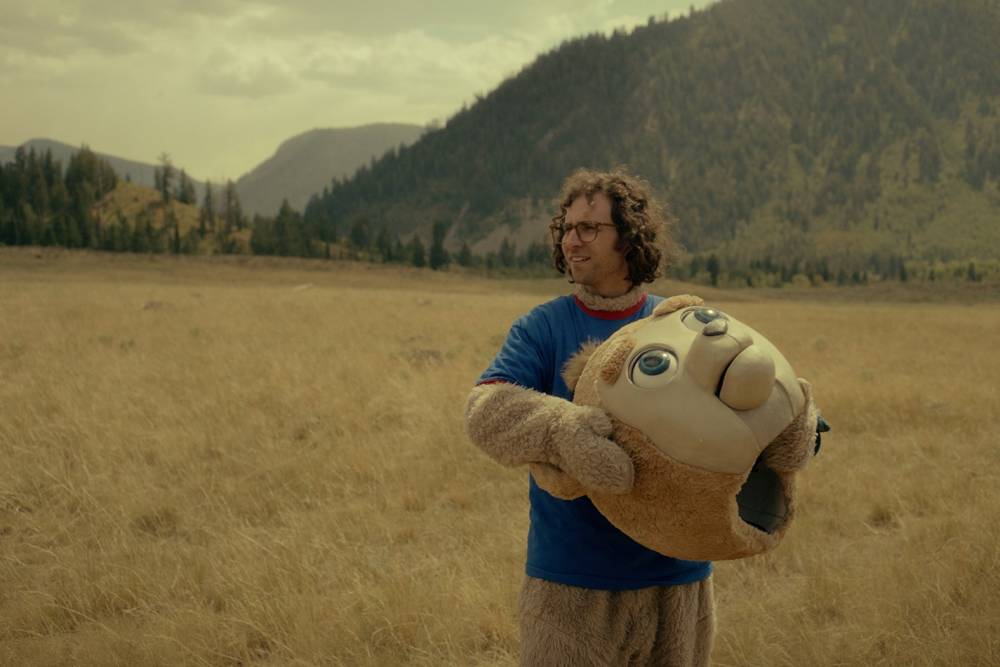 Kyle Mooney is one of the most discomforting comedians in modern history. If you’ve followed his career, from Good Neighbor and Saturday Night Live, you’ll know that he specializes in the super-straight man, where no matter how ridiculous his surroundings or the scenarios, he plays it like something out of Shakespeare. In fact, more often than not, the humor isn’t meant to be funny, in the traditional sense – the humor comes from the super specificity of the scenario. That means that sketches like “Inside So-Cal,” Chris Fitzpatrick, Bruce Chandling, and his 90s teen show parodies create something of a love-it-or-hate-it effect. His first feature film, Brigsby Bear, isn’t any different in that regard, and I think it is entirely possible that many audience members will write it off, or not “get” it. However, if you are a fan of Mooney’s shtick, and you open yourself up to the film, then you will be treated to one of the most touching odes to creativity, filmmaking, and fandom the cinema has ever seen.

For twenty-five years, Brigsby Bear Adventures – something of a combination between Barney the Dinosaur, Cyberchase, and Lost in Space – has been screening to an audience of one. When the show comes to an abrupt end, James Pope (Kyle Mooney) sets out to make a thematic conclusion to the show that has shaped his entire life.

If that previous description seems a little vague, my apologies. Childhood friends and creators Mooney and Kevin Costello have made it incredibly clear that their goal is to have people see this movie knowing only that tagline. I want to make it abundantly clear that knowing the twist won’t take anything away from this film in the slightest, as I went in having it spoiled from early reviews, but I will honor both the readers and the filmmakers’ intent. However, this will make things more challenging for me, because I honestly don’t know where to begin breaking down this film. Story-wise, this is a film that is earnest both in its optimism and its love for movies, fandom, and pop culture in general. You see, the entire film can be read as an ode to creativity. Despite his naiveté, James is an incredibly intelligent young man, who constantly debates with his the authority figures in his life, including Mark Hamill, Jane Adams, Matt Walsh, and Michaela Watkins, over the direction his life will take. They very much want him to focus on science, and to give up his love for a fictional world and his desire to creative new stories in it. This is the eternal struggle of the creative: the people who support us want to support us in all endeavors, but they also want us to succeed, and in a field where success is so incredibly rare, it can be hard for them to accept the path as opposed to, say, mathematics. Furthermore, when James meets people, he’s socially awkward and off-putting. This makes sense in the context of the film, but also works on a metaphorical level, getting to the heart of the introverted, socially awkward nerd in the heart of the artist. Sure, artistic people may not be as uncomfortably different as James, but surely we’ve been in a situation where we’ve felt that way.

It’s a very interesting concept – what would you do if you went out into the world to discuss Star Wars, Lord of the Rings, Harry Potter, or Game of Thrones with someone, only to discover you are the only person in the world to know about it? How would you react? (If you aren’t a member of any of these fandoms, feel free to insert your own) This is the fascinating route that the film travels down, and it uses this thesis to raise questions about why we become fans of the things we love, and where that love can lead us creatively. Watching James’ journey to create his Brigsby film is like a trip down memory lane for anyone who loves pop culture. As he begins writing his film, we watch as he Googles “Can you tell me how to make a movie? Thank you, Love James,” and begins to create storyboards on his walls, the way that any creative type has drawers full of loose leaf paper with scribbled ideas wadded up inside. We see him meet fellow creatives and work together to make a movie in their backyard (one of the great things about this movie is that everyone, in one way or another, is a creative type, whether they did theater in high school or make animation on the side), the way that anyone who loves film once did in their own backyard. James’ take on this is, “I like making a movie. You just get a bunch of your friends and put the pieces together and that’s how you make a fantastic movie!” This may be my favorite line from any movie this year, because it’s a reminder of why we fell in love with being creative in the first place – the ability to do what you love with the people around you. We even get to experience someone falling in love with movies for the first time, the way so many of us have. Sure, there’s the twist of it being a terrible teacher comedy starring Tim Heidecker, but the film is so warm-hearted, it even feels like those films, the one I would normally bash on this site, are an art form. It’s a reminder that somebody slaved over something to bring us a little joy for an hour and a half, and it makes me feel a little guilty about bashing something that somebody loved, and that I was once innocent enough to love.

One of my favorite things about this movie is the tone it establishes. When it wants to, Brigsby Bear isn’t afraid to go as dark as, say, 2015’s Room. It understands that aspects of this story are frightening, tragic, and heartbreaking. An early scene with Greg Kinnear is almost painful in its honesty. However, for every moment that’s frightening, there’s one that’s delivered in the sort of awkwardly hysterical way that’s made Mooney famous. Scenes where Mooney tries to bribe somebody by fumbling with pocket change for almost a full minute, pulling out what amounts to $2.12, and saying unabashedly, “What do you say we keep this between you and me?” That’s brilliant comedy. The film is filled with little moments like this, be it incredibly dark (there’s a take on the brainwashing effect of children’s television) to the silly (Brigsby raps!) to the hilarious (when James ends up in a mental hospital late in the film, a fellow inmate asks how he plans to escape. James replies, “It’s pretty complicated,” before throwing a TV through the window and hopping out). It hits each beat at the perfect time in the perfect way, balancing out its story so that neither drama nor comedy completely overwhelms the other, and allows the audience to focus on the themes at hand instead of attempts to manipulate on set of emotions or the other.

However, what makes the film a true triumph is the truly optimistic spirit it has about society. It would be very easy for any of these characters to mock, abuse, or generally harm James’ character, considering his past. However, everyone he comes across is kindhearted, smart, and compassionate. He goes to a party with teenagers, where you’d expect them to mock him. And yet they open up to him and bond with him over Brigsby. He meets people on the street who recognize him from his Brigsby fame, only to have them hug him and offer support. Hell, even the “villains” of the film are offered redemption. No one is painted as evil in this tale, even in the face of ultra-negativity. It seems to exist in its own world of happiness and art, creating a hyper-real world that we would all rather live in.

Performance-wise, everyone in this film is at the top of their game. As mentioned, Mooney is spot-on, playing his super-straight man in the face of an absurd and disturbing reality. It’s sort of like a male version of Ellie Kemper in many way, only less outwardly optimistic. Matt Walsh and Michaela Watkins are both heartbreaking and comforting in their roles as two individuals struggling with their reality. Kinnear seems to be having the time of his life, as he gets to balance the film’s most dramatic and comedic scenes almost single-handedly. Ryan Simpkins is one of the most realistic teenage characters I’ve seen, as is the breakout actor Jorge Lendeborg Jr. And there are a couple of great cameos from Mooney’s SNL friends. However, in my mind, there is only one truly remarkable performance in the film, and that is Mark Hamill. Hamill technically plays three roles, each more memorable than the last. His role as Ted Mitchum is kindly, creepy, loving, and flawed, all at the same time. He makes an impact even with only a few minutes of screentime. Perhaps the reason we remember him is that his unique talent for voice acting is used throughout in the Brigsby Bear scenes. Hamill is arguably the greatest voice actor in history, creating two unique voices for the innocent, kind-hearted Brigsby and the evil Sun Snatcher. The latter is the funniest, as it portrays Hamill’s face inside a giant Sun hurling insults in a variation of his Joker voice. It’s one of the best performances of the year, and one of the best of Hamill’s illustrious career.

Look, I’m not sure everyone will enjoy Brigsby Bear the same way I did. It’s a disturbing, weird little film that avoids any traits of traditional drama or comedy. However, once you get onboard, you will find yourself watching one of the greatest odes to creativity the screen has ever seen. At its heart, the film is a simple “put on a show” tribute, like 42nd Street, Footlight Parade, and Ed Wood. It’s a film about the way loving art unconditionally is inherently therapeutic, helping one cope with the traumas of the past, and that that love can help create new art from your pain. Near the end of the film, a nervous James tells his friend Spencer (Lendeborg Jr.) that he’s afraid. “What if they don’t like it?” he asks, terrified. Spencer smiles at him and says, “Who cares? We finished Brigsby.” And that’s the truth about art. If you do something that you truly love with the people you care about, who cares what anyone thinks? Well, that may be the film’s moral, but it’s still my job to judge it. Luckily for James, Kyle, and the rest of the crew, I did love it. I loved it the way that James loves Brigsby. And I hope you will too.