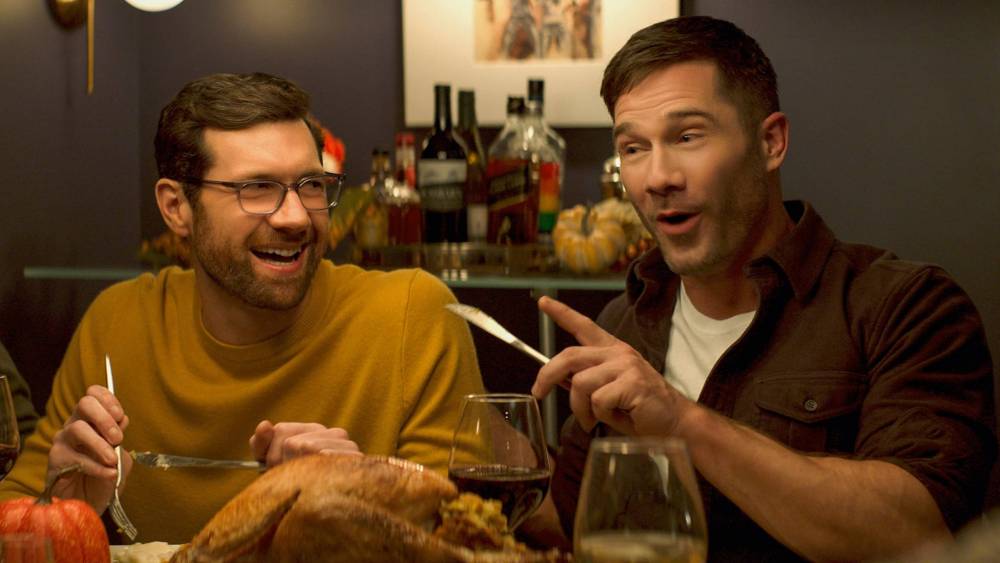 After years of heteronormativity within the studio system (the independent scene has always been delightfully queer in that regard), there has been a recent upswing in LGBT+ romantic comedies in recent years. Love, Simon gave a queer spin on Pretty In Pink, Happiest Season and Shiva Baby provided a lesbian take on Hallmark movies and The Graduate, and this year’s Fire Island saw a new twist on Jane Austen. In Bros, the newest film from Nicholas Stoller and Billy Eichner, the gay rom-com looks to tackle the raunchy sweetness of Forgetting Sarah Marshall and The Forty-Year-Old Virgin (the former directed by Stoller himself, and all three sharing a producer in Judd Apatow). Like most Apatow features, the jokes are fairly hit-and-miss. But there’s an inherent sweetness to Bros’ story that gives it a certain level of charm.

Bobby Lieber (Eichner) is your typical forty-something gay New Yorker. He’s out and proud, never afraid to speak his mind, and ever-frustrated by the awkwardness of the gay nightclub scene or the hellscape that is dating apps. Still, he’s more than comfortable being alone – after all, love is a heteronormative construct. However, his views on falling for someone change when he meets Aaron, an attractive lawyer who is every bit Bobby’s intellectual equal, yet with laidback “macho” views on life. Can these two crazy kids overcome their insecurities and make something work?

It’s hard to deny that Bros is a unique film due to its unabashed acceptance of gay life in the 21st century. Stories work best when they are hyper-specific to a time, place, and culture, and Eichner uses his script to explore the experiences of the world around him. This is a film about trying to figure out your identity in the year 2022, navigating a world of cliches that make you too gay for some, yet too straight for others; where younger generations fail to have a grasp at the history of the movement – as Bobby rants at one point, “We had AIDS, they had Glee!” And in one of the film’s funniest dichotomies, where the messy, but loving factions of the LGBT community bicker over their contrasting identity politics to create an inclusive LGBT History Museum.

Eichner invites audiences in to explore this world with him through his film. And yet, knowing most audiences – even ones not currently trying to burn books in states across the country – might not fully understand his story and universe, he stages his narrative through the tropes of the romantic comedy genre. You see, Bobby was asked to write a rom-com himself, but he can’t, because he’s never been in love! He’s a classic lothario, living in a world of hookups that he loathes but unable to commit! It’s going to take someone who can verbally spar with him and see him for him to get him to change his curmudgeonly ways – but wouldn’t ya know it, that person’s his complete opposite, a laidback meathead? Couching the story in these sweet, yet earnest story beats helps ease audiences in for Eichner to do something different.

But here’s the thing about making a genre film – even if you’re doing something “new” or “different.” You have to deliver on the goods. In the case of a romantic comedy, that means you have to be funny, sweet, and sexy. In terms of the romance, Stoller’s direction makes the duo look loving enough to buy their relationship. And their sex scene is surprisingly sultry – the real one, not a series of awkward hookups that precede it. But as for the jokes themselves…well, even if you didn’t know Judd Apatow was a producer, you’d likely figure it out pretty quick when it comes to the jokes.

Apatow has always had this terrible knack for relying on improvisation to “punch up” his scripts. This always results in some weirdly assembled final product where half the jokes are funny, half aren’t, and you can’t figure out who to blame. Bros continues in this tradition, but with more wildly dissonant results. I have never seen a film swing so wildly between the quality of humor. One joke would have the audience howling with laughter, while the next would earn deafening silence – no in between. I’m not sure if this is the fault of Eichner’s script or an off-camera voice (Apatow’s or Stoller’s, it’s hard to say) telling the actors “Ok, now let’s do a silly one,” but someone’s vision seriously hindered someone else’s sensibilities.

Of course, I want to stress again that the jokes that land really land. I’m still giggling at some of the punchlines a full week later. Eichner’s film is filled with little asides or punchlines of all shapes and sizes. There’s a children’s book that Bobby had once written titled “Are You There God? It’s Me, Martina Navratilova.” The couple’s first date is to a gay cowboy movie that, once again, features sad dying characters (because, as Bobby points out, there’s nothing progressive straight audiences love more than homos dying for their sins). And a running gag features a Hallmark-type channel trying to sell Christmas movies appealing to “woke” audiences – a bisexual Christmas movie bears the title “Christmas With Either.” These are solid jokes, delivered well verbally and visually.

As for the acting, the romantic couple works relatively well, albeit with one performer doing most of the heavy lifting. Eichner is fun as a gruff romantic lead, and he’s a funny enough actor, but he made a crucial error in casting a counterpart who just dominates the film from beginning to end. Macfarlane is a real find here as basic bro Aaron. Not only does he have the best jokes – which he delivers the best, it should be noted – but his character also feels the most real. Everyone else feels like a character, while Macfarlane plays Aaron as a person, giving him a weight that might not otherwise have existed.

Amongst the supporting cast, Eichner and Stoller filled out their ensemble well. The great Guy Branum has been known as the go-to gay best friend in rom-coms for years, and now he gets to do his shtick opposite a gay couple. I can still hear him declaring, with pitch-perfect inflection, “I’m on a new app called Zellweger. It’s for gay guys who want to talk about actresses before hooking up.”

There’s a series of cameos from gay or gay-adjacent actors that all pop, from the sweetness of Harvey Fierstein to the obviousness of a Kristin Chenoweth appearance to SNL’s Bowen Yang as a tech billionaire who delivers a showstopping monologue, as only Yang can, about a potential gay trauma haunted house. Oh, and fans of The Middle should be happy to know that Brock Ciarlelli pops up as Steve, whose role I won’t spoil other than declaring him the film’s funniest character.

And since most of the film not involving Aaron involves Bobby’s quest to complete his LGBT Museum, I should also note his cast of bickering contemporaries. Most of them are doing straightforward work – Dot-Marie Jones and Ts Madison are mostly expected to play straight women opposite the more flamboyant committee members, while Jim Rash is unsurprisingly great, and the sardonic Eve Lindley is a real find. I hope to see more of her in the future. Oh, and I feel it’s important to note that for an actress with seemingly no self-awareness in real life, Debra Messing makes a cameo appearance that perfectly spoofs her own image. She earns some of the film’s biggest laughs.

Bros is an Apatow rom-com through and through. It’s shaggy and long, yet with an undeniable sweetness at its center. It’s funny enough to sustain you for two hours, you’ll like the characters, and you’ll have a good time. Do I wish that the film had, as a whole, been sweeter and funnier? Absolutely. But it gets the job done, has enough laugh-out-loud moments to get by, and most importantly, opens the door to more, hopefully even better studio films to come. And God knows I need more Luke Macfarlane in my movies ASAP.