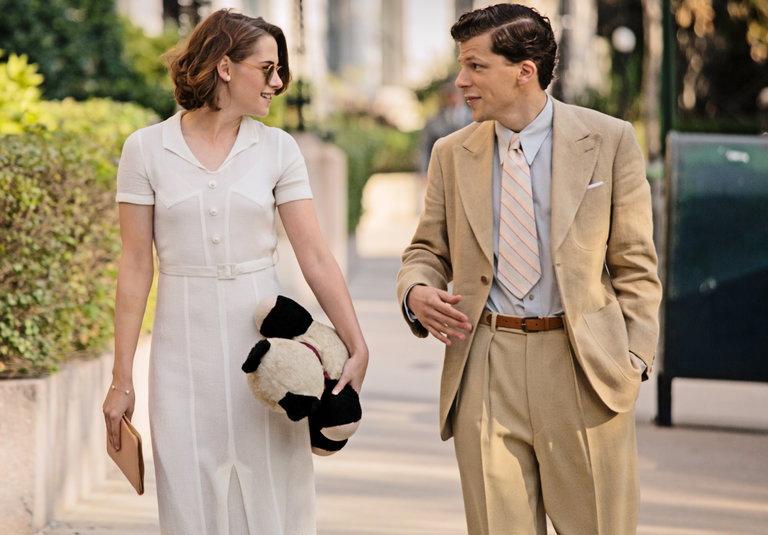 Café Society is the epitome of a fine film. The actors are all fine. The script is fine. The filmmaking is fine. Everything is fine. The problem is, with all of the tools at their disposal, we deserve better than fine. In fact, to settle for average with this level of talent is a slap in our faces. We deserve better-from Jesse Eisenberg, from Steve Carell, from Kristen Stewart, and especially from Woody Allen.

The film takes places in the “Golden Age” of Hollywood, as we are guided through the life of young Bobby Dorfman (played by Eisenberg doing a Woody Allen impression, as all leads this century are). Bobby is a true New York Jew, coming from a family of three children, each given extensive subplots more extraneous than the next. His older brother, Ben (Corey Stoll), is a major gangster, and the new proprietor of a nightclub. His sister is a schoolteacher, who married a Communist intellectual. Bobby has dreams of fame and success, and he hops to achieve that by moving to Hollywood and working his way up in the industry. He begins working for his uncle, high-powered agent Phil Stern (Carell), and despite becoming disillusioned with the whole scene (supposedly), he decides to stay, in the hopes of wooing a young secretary named Vonnie (Stewart), who is seeing a secretive married man.

And that’s about it. The plot meanders from one moment to the next, a series of barely-connected plot threads to show us a new scene and new location where Eisenberg and Stewart share clichéd and trite views on life intending to show us that they are growing, when in fact we see no evidence of this in their actions. The film takes so many detours to explore other characters and plots that mean nothing that I found myself looking at my watch multiple times. During a 96 minute movie. And I started doing this at minute 35. That is a terrible sign. Woody Allen’s narration is meant to serve as some sort of guide through the story, but he sounds so dull that I was afraid he would die halfway through reading it. I suppose if you wanted to go for some level of analysis, it could be interpreted as an older Jewish man (Allen himself, perhaps) looking back on the glory days of his youth and reminiscing, thus explaining all of the random and pointless side plots. But there is not enough evidence to support this theory in the film itself, and without the evidence to back it up, I cannot, in good conscience, give the film that benefit of the doubt.

Furthermore, I need to address something in Allen’s filmmaking. Yes, Woody Allen has a checkered past. Without getting into certain allegations that keep reappearing and disappearing at a disturbingly rapid rate (on both sides, mind you), Allen is already thought of as weird and creepy due to his relationship with the adopted eighteen-year old daughter of his ex-girlfriend. This is a fact that is hard to ignore. However, as a critic, it is my job to separate art from the artist and judge a film on its own merits. But if Allen keeps making films about how sometimes you find your true love while partnered with someone else, and using his films to justify May-December relationships, it becomes harder and harder to make that distinction. In short, Allen has spent the last seven years or so making films designed to tell the public, “Stop judging my relationship! It’s normal! See?” That’s all well and good, but the minute you let your personal life overwhelm your professional, you start to lose your gift, and eventually, you’re left with nothing.

The actors all play their roles competently. Carell is fine as the shifty, shrill uncle, but he is never allowed to reach the heights he did in Foxcatcher, Anchorman or The Big Short. In fact, in many ways, he’s just playing a slightly savvier Michael Scott, and it is not a good choice for the character at all. Eisenberg follows in the footsteps of Owen Wilson, Joaquin Phoenix and Larry David in playing Allen’s surrogate, and he is perfectly adequate for the job. Stewart, meanwhile, surprised me with her talent and, with a better script, might easily have proven herself as a legitimate actress, instead of whatever we saw in the Twilight series. However, if any actor managed to rise above the mediocre level of the script, it’s Corey Stoll. Stoll is perpetually one good role away from becoming a bonafide actor, putting out stellar performances for years, ranging from Midnight in Paris to House of Cards. Here’s hoping the right role comes along to get him the attention he deserves.

Meanwhile, Allen shows that, while he may have peaked in his writing ability about thirty years ago, his eye for directing is still sharp. The colors are bright, the film well choreographed, and the editing highly reminiscent of the era he’s reflecting upon. Each Iris wipe and side wipe is executed precisely, just as it would have in the 1930s. For all the negative things said about Allen, both personally and professionally, never forget that he does actually possess talent behind the lens.

However, this leaves us with a bunch of mediocre parts, which don’t add up too much. It’s a film I really wanted to like, there just wasn’t enough there. And because of this, it left me feeling cold and indifferent towards it. I didn’t want to feel this way. I like all these people. I like this idea. These people wanted to bring me an idea I liked. But in the end, they threw something together at the last minute and expected me to be grateful. And because I knew what they were capable of, I just can’t forgive that fact.