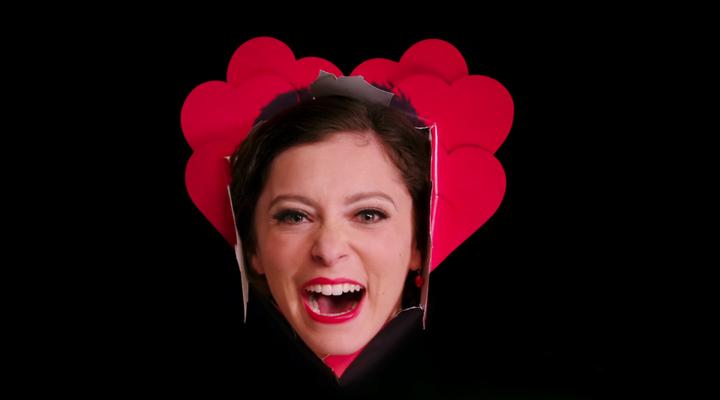 I’ve fallen behind on my television recaps. My apologies: more are coming over the next few days. To start things off, let’s talk about Crazy Ex-Girlfriend, one of my favorite shows of last season. Rachel Bloom and Aline Brosh McKenna’s goofy, dark, and inherently uplifting tale of a girl trying to win back her high school crush is one of the most innovative show on television-a sort of dark cross between BoJack Horseman, Felicity and Flight of the Conchords. It’s return this past week wasn’t quite as strong as the first season, but it still showed promise, and offered laughs, love, and insight into a group of lovable characters.

The episode begins exactly fifteen minutes after the last season ends, with Josh and Rebecca driving back home in awkward silence. Josh immediately tries to put the brakes on things, pointing out how insane Rebecca’s comments were. However, Rebecca, ever the lawyer, manages to justify her statements, erase some of the more intense phrases from the record, and eventually, makes it all his fault, making Josh feel bad. Having successfully turned things around, Rebecca seems to have saved the relationship-for now. This launches us into a whole new theme song, resembling a 1930s Busby Berkeley number. I’ll give it this: while nothing will ever top the first season’s theme song (one of the greatest of all time, in my opinion), this one does its best to continue along in the proud tradition of the show.

Three weeks later, Rebecca and Josh are still hooking up frequently, and we learn that Josh is even living with Rebecca while he looks for a new apartment. However, he refuses to share a bed with her, choosing the couch instead, despite Rebecca’s efforts. The next morning, she gushes to Paula about how great things are with Josh, only to learn that Paula is no longer Team Josh-she thinks he’s exploiting her feelings for him, and Rebecca is misinterpreting it as love. They also discuss Rebecca’s fling with Greg, Josh’s jealousy over the matter, and how weird it is that Greg mysteriously disappeared after the wedding-outside of one lousy text to Rebecca, he’s been off the grid. Rebecca denies still having feelings for Greg, despite Paula’s doubts, and confirms she’s all in with Josh-she’s even convinced him to have an overnight drawer at her place, so it must be love! This serves as a segue into our first musical number: a Lemonade spoof about short, kindly comments Josh makes that convince Rebecca he is in love with her. I will say that it looks stunning, and there are some great jokes in there-some of Josh’s “kernals” are brilliant, references to Kazaam abound, and it’s clear the budget for these numbers is higher-a fact joked about by Rebecca in the song, who reveals that “Darryl is now played by a broom on a stand.” Poor Darryl. However, in terms of the wit and intelligence normally seen from these numbers, this one felt a little…lacking. It felt like they had a concept and a style, and they chose to marry them at all costs, whether they worked together or not. It isn’t a bad song, but it doesn’t have the replay value that many of these songs do-or Lemonade does, while we’re at it. I won’t go as far to call it a strikeout, but it’s just a single, a double at best, unlike most of the show’s home runs (the World Series is on in the background, my apologies).

Anyway, everyone seems weirded out at the whole Rebecca-Josh dynamic. Paula tries to wean herself off of Rebecca’s madness, and Hector warns Josh that Rebecca may be trying to trap him, as well as the fact that Josh is now sleeping with his best friend’s ex. But while Josh agrees that Rebecca is kind of crazy and a bit much, she’s also sweet, and the only person who has ever encouraged him. He declares that Rebecca is decidedly Not Crazy…only to cut to Rebecca completely accessorizing his drawer, including a safe, Wi-Fi and the song “The Entertainer” played on a loop. Glad to know that Rebecca has started to budget her money better. Josh is horrified, and tries to tell her that they need to slow down. However, Rebecca is the master of the Deny and Switch: she first claims she’s going to redo all the drawers this way, and then pulls out a pair of handcuffs to entice Josh (a nice subtle touch is that Josh is the one with marks on his wrist for the rest of the scene). Josh still heads downstairs to sleep on the couch, where he has a nightmare of Greg confronting him over his douchey behavior. It’s enough to scare Josh into leaving Rebecca’s and ending their trysts until she officially gets closure with Greg.

Unfortunately for Rebecca, Greg is still M.I.A. She discovers that he is not visiting his mom like he claimed (when asked who is calling when Rebecca calls her, Rebecca answers “So I used to have sex with your son, and…hello?”), and his coworkers and manager refuse to answer (Heather is even excited-as much as she can be-because she gets all of his shifts. I’ve missed Heather). Finally, Rebecca visits Greg’s dad, who answers the door with “Oh God, the crazy bitch.” Kind of mean, but his delivery is perfect. Sadly, Greg’s dad also denies knowing his location, taking the hummus she brought as a bribe and locking her out. As it turns out, Greg was there, and hiding from the door. Greg’s dad advises him to tell his friends the truth, but we cut away before we learn what it is.

Meanwhile, Josh is sleeping on bubble wrap at his job. His boss immediately chews him out for his behavior and lot in life: “I’m a year younger than you, and I have a house.” It’s the wake-up call Josh needs (at least for now), and he ends up moving back in with his mom while he saves up. Back at the law firm, Rebecca asks Paula to use her sneaky and illegal ways to help her locate Greg. This culminates with Paula stalking Greg’s phone, and finding all of his comings and goings for the last month. They find his most frequented location and decide to head out immediately to find it, much to Paula’s chagrin. As it turns out, Greg is in A.A. Rebecca is shocked, not thinking that Greg has any sort of problem. I was actually like Rebecca, not thinking that Greg had given any indication of this in the first season…until a montage plays of all the times Greg has mentioned drinking, which is actually quite a lot. It’s an excellent touch on the show’s part. Greg then launches into a monologue, which turns out to be Santino Fontana’s best work on the show, including his musical numbers-a shocking statement because he’s known for being a voice more than an actor. As it turns out, the morning after the wedding, Greg was driving somewhere, only to be arrested for still being intoxicated, as one does, and was ordered to attend meetings (it isn’t explicitly stated, but I think it is supposed to be implied he was heading to Rebecca’s house). While he expected himself to hate it, he began to realize that he was, in fact, an alcoholic. He describes the feelings he had when he had his first drink-which, as it turns out, is the same glitter metaphor Rebecca used to describe her unhealthy feelings for Josh-and how quitting has helped him turn his life around. This shakes Paula, as she reveals to her husband, Scott, that doing bad things for Rebecca fills her with that glittery feeling, like when she watches The Bachelor, reads vampire novels, or writes a great legal brief. Scott declares he supports her no matter what, giving Paula a newfound lease on life. She finally stands up to Rebecca, telling her she can no longer get sucked into the crazy. However, this isn’t enough-Paula has had a contract written up, notarized by Mrs. Hernandez. Rebecca is horrified at the lengths Paula has gone to, but does manage to point out how flawless the contract is that Paula has written up. As extreme a scenario as this is, that little line does make me think this is a healthy, important moment in their friendship.

That night, Josh shows up to talk with a sad Rebecca. The two agree that they should wait until Greg is better to engage in a relationship, declaring themselves “mature.” Unfortunately, this leads into the appropriately titled “We Should Definitely Not Have Sex Right Now,” an R&B song about how they are mature about choosing to not have sex, even as the two of them give into their emotions and choose to have sex. They end up doing this for most of the night. The episode ends as Rebecca celebrates the small victory of getting Josh to sleep in her bed for the night. However, this is juxtaposed to the other characters having massive personal victories: Greg drinking orange soda while his dad has a beer, White Josh and Darryl (who are in that gross, cute phase) having a sweet moment after giving White Josh a key, and Paula signing up for Law School. While this seems like a big victory for Rebecca, her friends help us put in perspective how minimal this is.

End Tag: One of the dancers from the new opening asks Rebecca why they’re doing the dance, and she reveals that they’re just made up as part of her deranged subconscious. The woman is convinced she’s real-she has feelings, and emotions, and thoughts, but Rebecca reveals that that’s just how her imagination works. As the woman protests, Rebecca wills her out of existence and resumes the routine. That might have been the darkest opening yet. Good lord.

Overall, I would say the premiere is one of the weaker episodes of the show yet. The cast is still great, but it seems like they’re still getting in the groove of things. That’s not necessarily a bad thing, as long as they recover well. And there is still a love of promise in what we’re seeing-a running joke involving ordering sex toys on Amazon Prime, Greg’s interactions with Frank at the A.A. meeting, and the detail that goes into these musical numbers are all great. The show is obviously going to struggle a bit now that they’ve changed the basic conceit, but as long as they recover from this stumbling block, the show should resume smooth sailing shortly (say that five times fast).

I will rank each of the episode’s songs in every posting, and then an overall ranking in a Wednesday Listicle at the end of the season. A ranking of tonight’s songs: