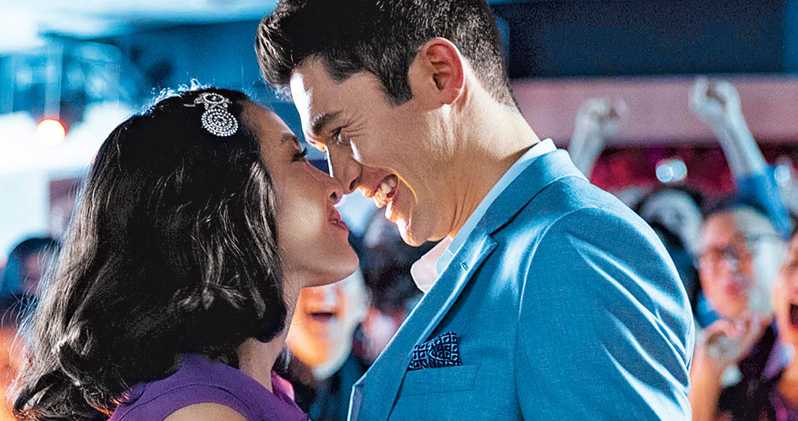 Crazy Rich Asians doesn’t take any risks to upend its story. It’s perfectly content telling a Hallmark-esque classical rom-com/chick flick to the best of its abilities. It knows exactly who it is for. It’s for your mom, who enjoys a good Saturday afternoon movie. It’s for your mom’s three sisters, all with different tastes and who never agree on anything. It’s for your grandma, who enjoys good clean family fun. It’s for your dad, who pretends he doesn’t like these kinds of films but guiltlessly guffaws at the side characters. It’s for the Asian community, who has long been slighted a film so openly and proudly Chinese. And above all, it’s for me, a critic who enjoys good writing, good acting, and good laughs.

When NYU professor Rachel Chu (Constance Wu) is asked by her boyfriend of one year, Nick Young (Henry Golding), to come meet his family in Singapore at the marriage of his best friend, she naively says yes. I mean, he rarely mentions them – what could possibly go wrong? Apparently a lot, as Rachel soon learns that Nick’s family is one of the oldest, most famous families in all of Southeast Asia, and he is the heir de facto to their massive fortune. And so Rachel finds herself immersed in a world she doesn’t fully understand, in a country she’s never been to, facing down Nick’s crazy family and overbearing mother, Eleanor (Michelle Yeoh).

I think what’s most striking about this movie is its vast number of clichés. It is actually kind of stunning the way the film goes through the checklist. Family drama and an overbearing relative? Check. Advice for the main character from a sassy best friend and/or a sassy gay friend? Check. The fake-nice Other Girl who tries to sabotage our heroine? [Unfortunately] check. All of this playing out at a big wedding? Check. A trying-on clothes montage? Check. Lingering muscle shots and catchy pop songs? Check and check. A run through the airport?!? You better believe that’s a check. It’s rather amazing how rarely this film challenges even the cheesiest of clichés – and yet, for the most part, the film makes them work. Sure, occasionally that’s because the film subverts expectations. The catchy pop songs are all covered in Chinese and Cantonese by Asian artists, which is played both straight and as a joke – AND allows the clothing montage to be scored to Sally Yeh’s cover of “Material Girl” (be still, my heart). The airport run has all the emotions and conventions of the stereotype, but adds some clever twists to create some depth in an otherwise-stale genre norm. And perhaps most important of all, the film uses the family drama cliché to dive for something deeper. Yes, there’s all sorts of drama stemming from the overbearing mother, and the family secrets and quirks; however, these ideas go beyond serving as an obstacle for Rachel and Nick to overcome, and instead serve as an insight into Chinese familial relationships, the cultural divide surrounding mothers, legacy and honor, and these changing roles between generations. However, for the most part, director Jon M. Chu and writers Peter Chiarelli and Adele Lim choose to play things incredibly straight. And what’s amazing is that it works. They understand that audiences don’t particularly mind or care if a romantic comedy reuses things we’ve seen before, or reuses details from genre entries past. The romantic comedy need only follow a very simple formula to truly be great: incredibly attractive people falling in love who are helped out by wacky side characters (here played specifically by Awkwafina and Nico Santos), while the family gets in some great guilt and digs. Does sticking to clichés run the risk of becoming stale, or dull? Yes, and the film definitely lags in the third act because of it (not to mention the annoyingly handled subplot involving Nick’s ex-girlfriend). However, there’s a reason that some things never grow old, and when handled properly – like, say, including a wedding sequence set to “Can’t Help Falling In Love” – a good film can really make its conventions sing.

Of course, the only way you can make this many clichés work is by crafting a strong enough film on which to hang them. Specifically, you need the script to be smart, the direction to be flashy, and the production design to be flawless. Thankfully, Crazy Rich Asians handles all of these in abundance. Sure, the script suffers from too many characters, but at least that is a common flaw for the genre – even this film’s closest relative, My Big Fat Greek Wedding, suffered from an overabundance of familial relations. It’s a film that’s smart enough to take us past the meet-cutes, directly into the Meet The Parents-esque hijinks. Everything about this film knows how to garner laughs, from the dialogue to the characters. And I’m not just talking about chuckles. I mean hard guffaws, the kind that leave you rolling in the aisle and leaning on your date’s shoulder. Chu knows how to perfectly execute his comedic sequences, ranging from the behavior of the wacky cousins to an over-the-top extravagance of an Apocalypse Now homage to an incredible opening sequence where the Young family’s wealth is demonstrated with everyone’s favorite form of revenge: screwing over racists. And whenever the scenarios themselves fall behind, the film provides us with great zingers to get by, mostly delivered by Awkwafina, Santos, Ken Jeong and Jimmy O. Yang, each of whom steal the movie. I have not laughed harder at a line all year than when Jeong scolds his daughters for not eating dinner by declaring, “There are children starving in America! Eat your nuggets!” It’s a film that knows, from beginning to end, what it needs to do to get the best laugh. And if that wasn’t enough, it looks gorgeous to boot! The term “wealth porn” is a bit of a double-edged sword, but there’s a reason that TLC, The Food Network, and HGTV are amongst the highest rated channels. People love watching shows and films that glorify great outfits, great architecture, and great food, and Crazy Rich Asians borders on a travel guide in terms of how deified the sumptuous meals and picturesque landscapes are. Everything, and I mean everything, in this film is extravagant, and I adored it. Hell, even the location titles are designed to be ostentatious. This is a film that knows what it does well, executes it quickly and effectively, and never loses the edge on being clever.

However, the key to any great romantic comedy is the cast, and luckily Crazy Rich Asians has one of the best ensembles of the year – maybe in a decade. From the top down, everyone is doing funny, emotional work that brings the stellar script to life, even if I do think there are a few cousins that could be eliminated at no great loss to the film. Obviously, Constance Wu and Henry Golding are key to the overall success of the film, balancing the romantic moments with the comedic with finely honed timing. Wu in particular is a knockout, taking full advantage of the opportunity to play the straight man after years of killing it as the more-absurd parent on Fresh Off The Boat. She nails the film’s comedic, emotional, and romantic moments with the makings of a true star. Meanwhile, Golding is more the foil to Rachel’s story, and doesn’t get as much to do other than let the sparks fly and let us meet is wacky family, but he has a certain panache that helps carry even his lesser scenes. And perhaps most important of all, these two have chemistry! Yes, that may seem silly to say in a romantic comedy, but after watching so many films with relationships so incredibly forced, it’s refreshing to see two leads that seem to like each other. But in this subgenre of romantic comedy, it’s the side characters we care about, and thankfully each and every side character comes to play. Perhaps the greatest stand-out, but most unsurprising, is Yeoh as Nick’s mother Eleanor. In lesser hands Eleanor could just be the mean mom, a version of the Robert de Niro role in Meet the Parents. But Yeoh is one of the greatest actresses alive, and she understands the psychological and sociological underpinnings of her character’s motivations, both in what makes Eleanor tick and why she feels she has to treat Rachel so terribly. It’s a wonderful performance, and one that the great Malaysian actress plays pitch-perfectly. Other great performances from the family include the spot-on matriarchal performance by Lisa Lu and one of the best douchebag performances of the 21st century in Ronny Chieng’s Eddie. And of course there’s Gemma Chan as the mysterious and seductive Astrid, the favorite cousin who has the film’s B-plot and perhaps best monologue. Chan is easy to love, and it makes even her melodramatic subplot seem great enough to warrant its own story. And the engaged couple/McGuffin allows for two warm, charming performances from Chris Pang and Sonoya Mizuno. However, it is the handful of comic reliefs that really sell this movie for me. There’s Ken Jeong, who is kind of strange and doesn’t always work, but is always good for a laugh. There’s Jimmy O. Yang as that one friend we all hate, Bernard; and boy does Yang have a great time making the audience hate him. There’s my personal favorite, Fiona Xie as the actress-girlfriend of Nick’s cousin Alistair (Remy Hii), who is a big ball of crazy in all the right ways. And of course, there’s the sassy duo of best friends in Awkwafina and Nico Santos. Awkwafina is having quite the year, stealing both Asians and her previous film, Ocean’s Eight. You can tell she’s still learning the tricks of the trade (these were her first two films, after all), but man, she knows how to deliver a line and steal the energy of a scene. She’ll be a star one day, mark my words. Meanwhile, Santos is perfectly content playing a cross between Rupert Everett and Tim Gunn. I absolutely love how Santos approaches the role, taking the clichés and playing both to and against type at the same time. Whenever Santos or Awkwafina are onscreen, they steal the film out from under the leads, but when you put them together…my God, it’s magical. Honestly, there is not a weak link amongst the cast.

Crazy Rich Asians is a Hallmark movie with a better script and better acting. Are there a few too many clichés? Yes. Could the film have flowed better with a stronger third act and fewer side characters? For sure. But at its heart, this is a film with simple goals: to make people laugh, to make people love, and to allow an entire culture to feel represented for the first time in years (at least since 1993). In terms of these goals it succeeds, in abundance. Crazy Rich Asians isn’t here to break the mold; however, it does want to use the mold to make something exciting. And as far as I’m concerned, that’s all a film needs to do.