‘Crimes Of The Future’ Review

HomeReviews‘Crimes Of The Future’ Review 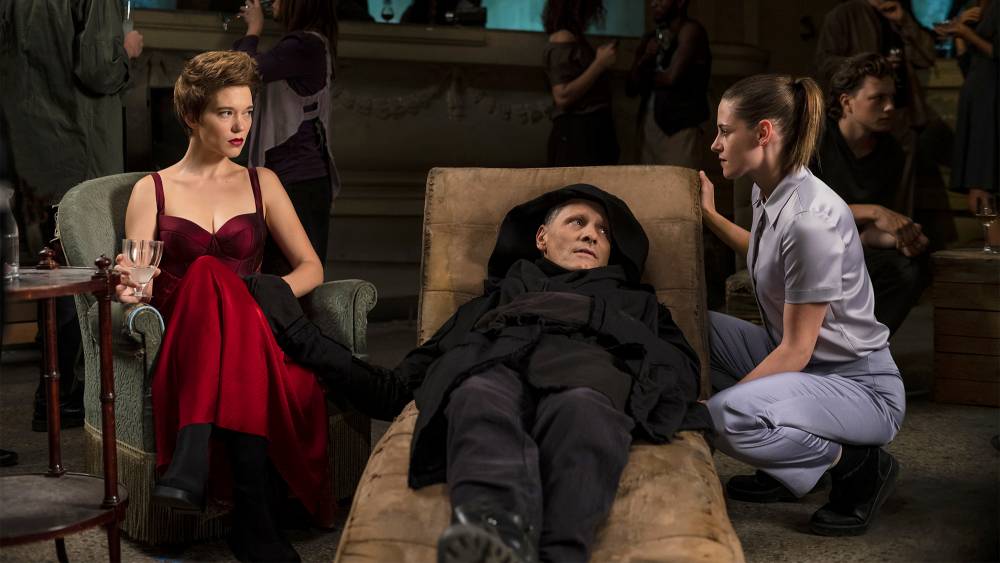 A Cronenberg picture always dares you to guess what the film’s about. Critics and scholars will bend over backward trying to analyze his nasty little films, parsing for meanings that are almost certainly intended, including man’s toxic relationship with science and technology, death, and the innate evil every human tries to suppress. Or perhaps we’re all overthinking the legendary Canadian director’s most overt message: that the human body is f*cking gross. His newest film – and first in almost a decade – is Crimes of the Future, a film that makes it clear that the more things change, the more they stay the same – artistically, thematically, and in terms of Cronenberg’s frustrating, yet always high bar for quality.

Sometime in the not-too-distant future, the human race began to undergo a series of evolutionary malfunctions. While some are hit harder than others, growing extraneous new organs that function like a tumor, the human race as a whole has lost the ability to feel pain. This gives rise to a new international pastime: street-side surgeries as a means of performance art. Amongst those hacking themselves to bits for mass entertainment are Saul Tenser (Viggo Mortensen) and Caprice (Léa Seydoux), renowned for Caprice’s artfully crafted surgeries on Saul’s constantly-evolving body. However, as government bureaucrats (including Kristen Stewart as weirdo Timlin) look to document and restrict Saul and Caprice’s artform, the duo soon finds themselves drawn into the agenda of a group of radical evolutionists, who ask them to perform the now-controversial art of autopsy on a young boy, who may hold the future of the species in his lifeless body.

What’s most abundantly clear by the end of Future is that the filmmaker has had a lot to say in the last decade, and he feels the need to say it all right now. There’s about ten thousand ideas all shoved into this film, most of which work surprisingly well in marriage with the others, whilst many grate against the film’s overall themes to stand out like a sore thumb. Commonplace Cronenbergian ideas such as environmental waste and its toxic effect on humanity and the superficial nature of the human body are unsurprisingly on display. What may come as a surprise to viewers is that Cronenberg not only uses the graphic surgeries as a metaphor for the artistic process – he does so by glaringly comparing self-mutilation to TikTok and junk cinema.

You may think I’m being flippant, that there’s no way Cronenberg’s sexy body horror can have anything to do with the dance app. But I could not be more serious. In Cronenberg’s view of the future, where pain ceases to exist and “surgery is the new sex,” people perform surgery on the streets as a means of seeking attention. As one character laments, “nobody understands the artistry of it anymore! Any idiot can just start hacking away for attention.” It makes the few geniuses like Saul – an “artist of interior design” – stand out. If that’s not a metaphor for the downfall of cinema as an artform at the hands of TikTok and franchises, I don’t know what will.

And if that doesn’t convince you, have I mentioned that there is an award show for the best home-grown organs and surgeries? An award show that Saul finds both alluring and insulting? When they first made reference to the “Inner Beauty Pageant,” I thought it was a throwaway joke. But no; it is very much real, and few lines stand out in all of worldwide cinema in recent years quite like the revelation that Saul has been “nominated for Best Original Organ.” I’m not sure Cronenberg worked out all the kinks (literal or figurative) in his grandiose, disgusting world-building, but God does he go for it, in ridiculously disgusting detail.

Of course, nobody goes to a Cronenberg film for the plot or themes. They so rarely matter, I’d argue Cronenberg himself doesn’t even care. No, people see Cronenberg films for how f*cking weird they are. And the master certainly doesn’t disappoint here! Bodies get carved up, revealing piles and piles of organs, both real and futuristic. Characters are graphically ripped open by cartoonish machines, the sound of metal-on-bone resounding through the theater, whilst the surgical subject is not only wide awake, but moaning in ecstasy. Weird Lovecraftian chairs contort the body to help the user digest, and beds possess tentacles that ensnare the user.

This is a film so wonderfully perverse the fact it opens with a kid traumatizing his mother by eating a trash can, so much so that she then smothers him with a pillow in real time, barely registers on the film’s list of sickest moments. In one shockingly perverse scene, Caprice unzips an open wound on Saul’s stomach as if it’s his fly and fellates his gaping wound, while he moans as if receiving back-alley oral sex. And I don’t think any moment will be as wonderful in all of 2022 as a man covered in lazily stitched-on ears with his mouth sewn shut dancing around as an artistic statement – a statement later derided as “escapist propaganda.”

My only concern is the sterility with which the entire film approaches the material. I know that sounds strange for a film as bizarre as what I’ve just described, but there’s just something missing from the mix. Maybe it’s the digital cameras, which lack the realism and allure of film stock. Or maybe it’s the fact that Cronenberg’s 79, and not as nimble as his earlier days when he made a head explode and transformed Jeff Goldblum into Brundlefly. But while it feels there’s something missing from this nasty, nasty stew, it feels hard to complain too much. When Hans Zimmer’s Cronenbergian score plays over some of the gnarliest footage you’ll ever see, you’ll be hard-pressed to continue complaining.

Amongst the acting, everyone’s at least making choices with their acting. It’s hard to complain when everyone’s giving it their all. This mostly works, as Viggo remains charming as hell as the rapidly decomposing Saul, and Léa Seydoux is always a great choice for your cast. Some actors play things perfectly straight, like excellent Scott Speedman and Welket Bungué, while others are appropriately off, yet entirely charismatic, like Tanaya Beatty and Nadia Litz’s mechanics-with-a-secret. And then…there’s Kristen Stewart. Now, I enjoy Stewart’s acting, or at least I have for most of her post-Twilight years. But I have never seen a performance this weird. She leans into traits early detractors considered her worst, fast-whispering every line in a mousy squeak as a rule-abiding dork who has something sexual awoken within her. It’s either the best or worst performance you’ll ever see – but I’d be lying if I said it didn’t work for me.

Crimes of the Future is like looking at an aging Picasso’s latest painting. Sure, it’s not one of his best works. But it’s still something to behold. It’s been four days since I watched this film, and I can’t stop thinking about it, in all its gross glory. Cronenberg is undeniably a master, and it’s fun letting him play in his own sandbox and tell his gross little stories, no matter how wild and scattershot his themes may be. It’s a fun, nasty little time at the movies for not only the artists, but the secret little freaks, perverts, and weirdos within us all. And I think that’s lovely.

Crimes of the Future is now playing in theaters nationwide; see it while that’s still true