‘Doctor Strange In The Multiverse Of Madness’ Review

HomeReviews‘Doctor Strange In The Multiverse Of... 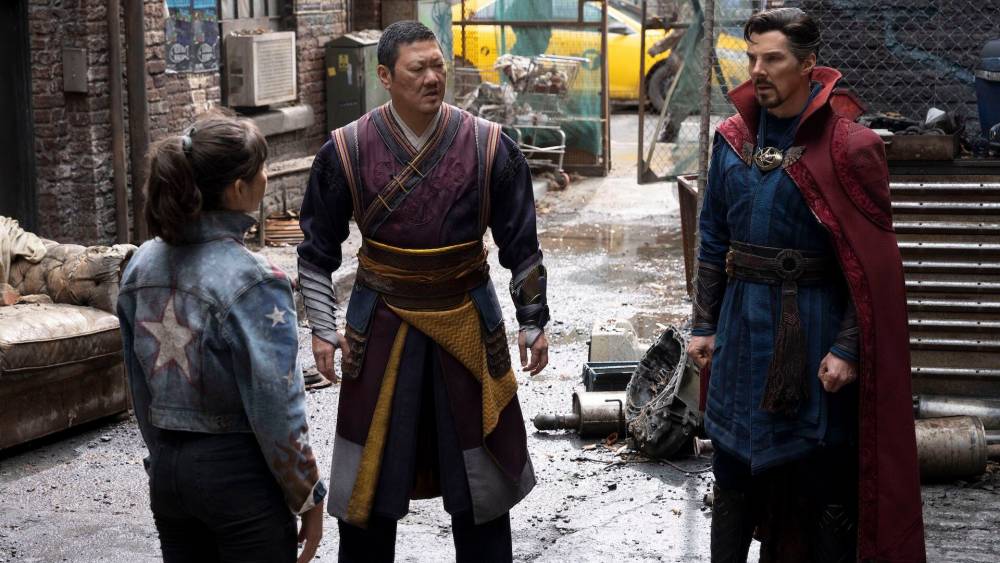 Despite their claims to the contrary, it is becoming more glaringly apparent with each film that the Marvel Cinematic Universe is made by committee. While the directors have control over stylistic flourishes, and may have some input in the story, 90% of the film seems finished before the director even shows up on set. Show the hero, add some cameos and jokes, and get out. It’s a formula that worked up until Avengers: Endgame, and has consistently disappointed ever since.

So it was interesting to see what could be done in Doctor Strange in The Multiverse of Madness, with noted auteur Sam Raimi (who kicked off the superhero craze in 2002 with Spider-Man) at the helm. The result is a gangly, mismatched concoction, where Raimi’s weirdo pseudo-horror sensibilities are crossed with Marvel’s mandatory formula.

Stephen Strange (Benedict Cumberbatch) can’t seem to catch a break. Despite his status as one of the most well-known Avengers, and his pivotal role in defeating Thanos, he has lost his title as Sorcerer Supreme to his former mentor and best friend, Wong (Benedict Wong), his former fiancée Christine (Rachel McAdams) is marrying another man, and he can’t stop having dreams about himself betraying a teen girl and being murdered for his heartlessness. As it turns out, that teen girl is real, and her name is America Chavez (Xochitl Gomez). She possesses the ability to jump through the infinite worlds of the multiverse.

And America is being pursued by someone Strange knows quite well: former Avenger Wanda Maximoff (Elizabeth Olsen), who has been corrupted by her own immense power as the Scarlet Witch. Pursued by the most powerful individual in the known multiverse, Strange must protect America as they bounce from universe to universe, confronting Strange’s own shortcomings, terrible moral dilemmas, and friends and foes both old, new, and those we haven’t technically met yet.

At several points in Strange, you remember why studios keep trusting Raimi with superhero films. Even when he’s forced to follow a cookie-cutter template, the man can’t help but make gutsy choices that flaunt all sense of template or good taste. An opening battle features a squid monster getting its eye ripped out. A character goes insane inside a haunted house where picture frames wink at her. A monologue meant to convey the most mundane of information – an exposition dump of the nerdiest, comic book-iest ideas you’ll ever hear – is heightened with an overlapping edit straight out of the nineties.

The final fight features a decision so absolutely insane I don’t want to spoil it here. And speaking of spoilers, I audibly squealed in the theater when Raimi loaded a scene with cameos and casting decisions the weirdest corners of the internet have been demanding, only to brutally murder every single one of them in five minutes. It’s the type of dark humor that Marvel has ostracized from its movies, and has been sorely missed from tentpoles in general for quite some time.

Yet no matter how many wins Raimi manages to rack up in his direction, there’s at least twice as many moments that clearly came from studio notes and forced rewrites. While it’s fun to see what Raimi does with a group of audience-demanded cameos, they clearly serve little to no purpose to the plot. Their writing is atrocious, the acting indicates none of the performers want to be there – and in fact, many weren’t, as they were clearly CGI’ed in after the fact.

Such is the case with most of the plot. Raimi was clearly interested in a trippy character study, with two heroes confronting their greatest flaws – Strange’s cold logician’s brain and Wanda’s emotional desire to recapture a normalcy consistently destroyed (a lesson already learned in WandaVision, but I digress). Yet Marvel refuses to let the characters reflect on these arcs. It detracts from cameos, unfunny jokes, and world-destroying threats quashed so many times they barely register at this point. Just once, I’d like a Marvel film that lets its characters feel nuanced, the way Peter Parker and Doctor Octavius once were in Spider-Man 2.

There’s no point in discussing the acting, because there isn’t any. Cumberbatch is certainly entertaining enough as Strange – his blend of sarcasm and a face that screams “I overthink things” allows him to carry the film admirably. And if anyone’s giving a real performance in the MCU, it’s Olsen, who is eating up screens large and small as the tragic Wanda Maximoff. Xochitl Gomez is a real find as America Chavez – I look forward to seeing where her career goes from here.

Actors like Benedict Wong, Rachel McAdams, and Chiwetel Ejiofor at least look like they’re having fun whilst taking their paychecks to fund other, better films. And that’s all I’ll say about the actors in this film, as listing any more delves into spoiler territory, and I don’t want to get SWATted by toxic fans. I’ll say this though: I’m not entirely sure Raimi oversaw their reshoots, as they look completely directionless in their scene. If any of these actors join the MCU on a permanent basis, hopefully they’re allowed to show some – any – signs of life.

No review I write will convince you one way or the other on Doctor Strange, or the MCU in general. After all, the film has already made $900 million as it winds down its theatrical run. But I’ll say this: Doctor Strange may end up being the most essential film of the franchise going forward, for this reason. It is an astounding example of the struggle between auteur and corporation, of art and commerce. It’s fascinating to witness in the moment. And hopefully the right lessons will be taken going forward.

Doctor Strange in The Multiverse of Madness is now playing in theaters nationwide; it will premiere on Disney+ June 22nd