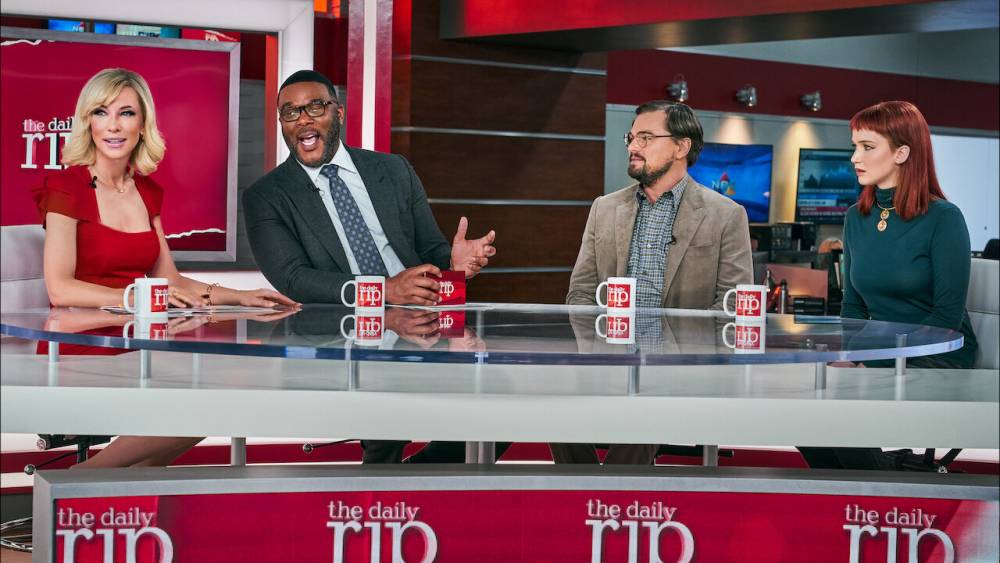 Something that doesn’t really exist anymore, for a whole litany of reasons, is the downer satire. I’m talking about a film filled with righteous anger and passion, as if to say “Open your f*cking eyes, people. The entire system is broken.” The gold standard here is, of course, Stanley Kubrick’s Dr. Strangelove, in which military figures are so desperate for war and politicians are so ineffectively spineless that the world is eventually destroyed in nuclear holocaust. But it seems Academy Award-winner Adam McKay is taking the most recent swing, and while his track record is hit and miss, the trailer seems to indicate he’s got something real on his hands.

Two low-level astronomers, the nervous Dr. Randall Mindy (Leonardo DiCaprio) and the more vocal Dr. Kate Dibiasky (Jennifer Lawrence) discover a giant comet hurtling towards Earth. Should it make impact, the entire planet will be destroyed. The duo embarks on a major campaign to warn the planet, spanning from the White House, run by President Orlean (Meryl Streep) and her Chief of Staff son Jason (Jonah Hill) to talk show hosts Jack Bremmer (Tyler Perry) and Brie Evantee (Cate Blanchett). However, as disaster seems imminent, the duo finds themselves stonewalled at every turn, due to hubris, jingoism, and good old-fashioned greed. Can Randall and Kate save the world in time?

McKay has been hit and miss since entering the more political era of his career. The Big Short is an incisive, genius piece of filmmaking, but Vice, while well-acted, was a real slog. But there’s something to this film, an original comedy with something to say, that seems to be resonating within the industry and abroad. Certainly the topic couldn’t be more pertinent – clearly written as a metaphor for climate change, McKay’s story about a cataclysmic disaster threatening the Earth that is covered up by the government, lied about by the media, and protested by the general public feels like a history lesson post-COVID. I won’t pretend every joke in the trailer made me laugh. But there’s promise here, and if Netflix plays its cards right, it could manage to make it a real Oscar contender. Don’t Look Up will play in select theaters starting December 10th, before debuting on Netflix December 24th. You can watch the trailer below.