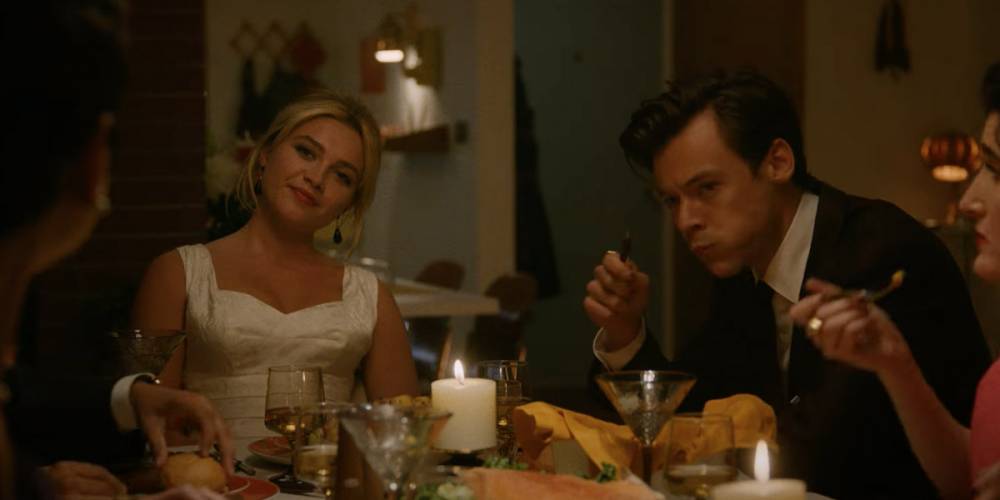 Ed. Note: If you’ve come to this review expecting some sort of rehash of the disastrous publicity tour surrounding the film, you are sorely mistaken. My interest here is solely to review the film as is, not the gossip and hearsay surrounding it. That said: Harry totally spit on Chris Pine

Back in 2018, I stated that Booksmart, Olivia Wilde’s directorial debut that electrified the critical world and slowly but surely became a word-of-mouth hit, was a strong first outing that promised a masterpiece from a maturing filmmaker. In Don’t Worry Darling, Wilde shifts her creative lens from coming-of-age comedy to psychological thriller. As an entire production, Darling is something of a step back. But in terms of what Wilde accomplishes visually – not to mention what she manages to coax out of lead Florence Pugh – Don’t Worry Darling proves that Wilde knows what she’s doing, and can successfully take a well-worn, tired screenplay and turn it into something entertaining.

Sometime in the 1950s, the young, happy, and horny Alice (Pugh) and Jack Chambers (Harry Styles) live an idyllic life in Victory, California. Everyone in the town is attached to the mysterious “Victory Project,” which supplies them with everything they need, from necessities to luxuries, and therefore they form a tightknit community of hard-drinking, workaholic husbands and their doting housewives. However, after noticing a few oddities in her seemingly-perfect existence – not to mention the warnings from ostracized community member Margaret (Kiki Layne), Alice begins to interrogate her utopian lifestyle – not to mention the town’s enigmatic leader (Chris Pine) – in a quest to determine if there’s something truly sinister going on in Victory…or if she’s slowly losing her mind.

The greatest takeaway from Don’t Worry Darling – even more so than the talents of its performers – is that Wilde has, in fact, grown as a filmmaker. Booksmart demonstrated a flashy panache for staging scenes, an understanding of the relationship between staging and performing and timing. Don’t Worry Darling possesses all of this and more – she has now developed into a stunning visual director as well. Working with the legendary cinematographer Matthew Libatique, Wilde crafts an immersive film, filled with lavish sets that create a sense of idyllic perfection; a reality too good to be true, and therefore unsettling to the viewer. It’s gorgeous to look at; the buildings are artfully rendered, and the costumery is exquisite – from Rat Pack-inspired suits and smoking men to elegant gowns straight out of a Grace Kelly movie.

More so than her dramatic staging, however, is Wilde’s ability to capture tension in her filmmaking, something many horror directors-for-hire still struggle to do. Wilde’s sequences of intrigue and terror are exciting to behold, never outright terrifying (this isn’t a horror film, after all), yet certainly squeamish in a way that’s both fun and challenging. While not every sequence of terror manages to land (a scene involving yolkless eggs comes off as silly more than striking), for the most part, the film makes for an unsettling experience. Creepy reflections stare back at you, walls close in, and there’s a few hypnotically Lynchian sequences rendered in black and white, all of which make for an impressively creepy ambiance.

And yet, as great as the filmmaking may be, it is the screenplay which undermines Darling’s mojo. It’s unclear what exactly went wrong in the writing process. Maybe it was the original draft written by Dick Van Dyke’s grandchildren, which could have been riddled with clichés and first draft ideas. Maybe Katie Silberman – so good at witty, smart dialogue in Set It Up – was asleep at the wheel. Maybe it was a collective failure. But the film consistently suffers from its script from beginning to end, undercut by pacing issues that leave ebbs when things should flow and vice versa. For these reasons, by the time Wilde reaches her third act – the point in which a script is expected to start extrapolating its ideas – everything slowly starts to unravel.

It’s easy to pinpoint the moment it goes a bridge too far – Harry Styles starts doing a pointless little dance. But from that point on, the parts start falling off Wilde’s well-oiled machine. The dialogue gets choppier, the Big Ideas get stupider, and it all devolves into a twist so obvious you could probably guess it by looking at the posters. The worst thing a script can do is believe that it’s original, especially when its ideas – about repression, gaslighting, and toxic masculinity – have already been told, and better. If anything, the writers should have taken a page out of the 2019 Black Christmas reboot – Big Ideas are far more fun when the screenplay doesn’t deign to assume “I am the first person to ever think this very obvious statement.”

At least Wilde is not alone in trying to keep the film running smoothly. She is, of course, aided by the great Florence Pugh, already a film-saving superstar at the ripe old age of 26. Pugh is phenomenal here, immersing herself in Alice whether she’s inhabiting a sarcastic 50s housewife (there’s more than a hint of Jane Russell in this performance), a headstrong protagonist fighting a potentially corrupt system, or just a woman going out of her g*ddamn mind. There’s traces of the performances that have come before feeding her here – her Midsommar insanity, Little Women’s lovable intensity, etc. But thanks to her uncanny talent and her synchronicity with Wilde’s direction, the film often outshines the script’s thinly written characterization.

Of course, for as good as Pugh may be, Styles is her complete opposite. As talented a singer as the superstar may be, he provides one of the screen’s most incompetent performances in modern history. He is such an inexplicably bad actor, lacking in chemistry with any and all cast members even his accent sounds off – and Wilde had the script changed so that Styles wouldn’t have to do an accent. I’m not quite sure how much of this is his fault; he is completely miscast (I’m still trying to figure out which actor could have pulled it off). But he is the performer we have, and it will remain to be seen if this role is enough to quash his burgeoning career as an actor dead in its tracks.

As for the rest of the cast, there aren’t many actors who truly shine, although no one is ever truly bad. In fact, I’d argue the two worst performances from the ensemble– Kiki Layne and Wilde herself – aren’t so much bad as they are miscast. Wilde’s normally a decent actress, she just gave herself the wrong role. As for Layne, the mistake here was giving an actress of her caliber a performance that is not only beneath her, but is honestly a bit offensive when thought about for more than five seconds. Otherwise, everyone’s doing an adequate job. Gemma Chan is appropriately creepy as the wife of town founder Frank. Comedians Nick Kroll and Timothy Simons always shine when playing sleazy assh*les, so they are ultimately a delight. And while I wouldn’t call this a good Chris Pine performance, seeing him go full Jordan Peterson/Ben Shapiro is a fascinating delight.

Don’t Worry Darling is a passable enough, entertaining enough feature, if only for a demonstration to actors and directors on how to save a picture saddled with a rough, rough script. It’s not a very smart film – a character is revealed to be evil when they suddenly appear with a goatee. Nor is it a wholly original film – most of Wilde’s setpieces are essentially lifted from The Stepford Wives and Get Out. But ultimately, that’s only a detriment so far as its diminished excitement. Jordan Peele borrowed from Carpenter and Spielberg. Both of them stole from Hitchcock. Originality is an important tool in storytelling. But it’s not just about originality; it’s also about entertaining. And Don’t Worry Darling is just entertaining enough to get the job done.