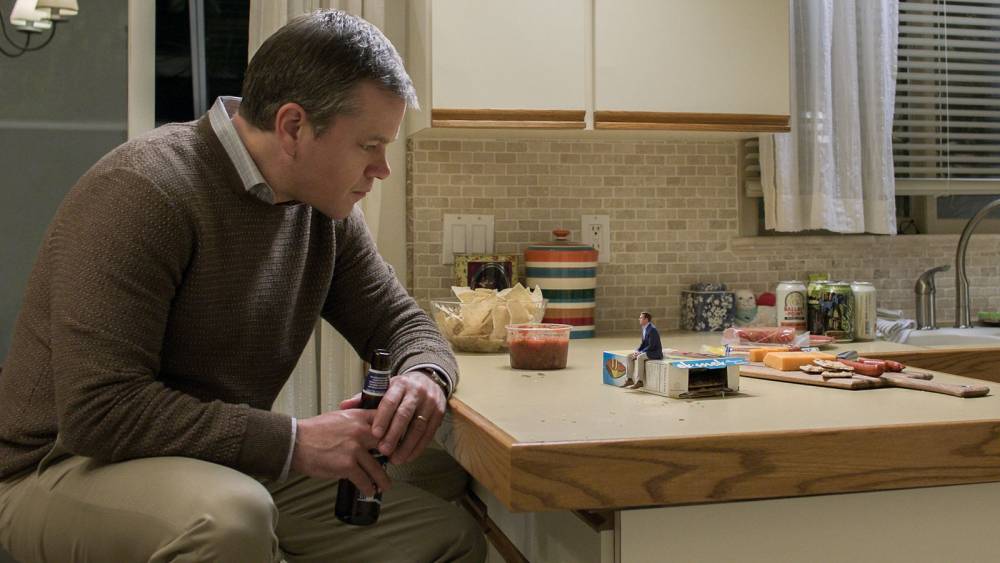 There’s nothing more disappointing than when a promising film, particularly a satire, ends up falling flat. Alexander Payne knows how to seamlessly blend comedy and drama, as we’ve seen in Sideways and Nebraska, and he’s already crafted one of the greatest satires of all time in Election, so the promise of a satirical take on humanity’s overconsumption seemed like it should be a slam dunk, especially with a cast this great. However, as the film progresses, the question you find yourself most asking is “Why?” Why isn’t this funnier? Why is he making that decision instead of focusing on the story? And why did this turn out so poorly?

In the near future, scientist Dr. Jørgen Asbjørnsen (Rolf Lassgård, and funnier written than pronounced) manages to find the answer to overpopulation, overconsumption, and climate change. You see, if our issue is how much we consume and waste, the easiest solution would be to shrink ourselves to five inches tall. This would reduce waste, save our most precious materials, and allow those who participate to live like kings ($100,000 in normal dollars is worth $12 million in “Downsized” materials). In need of a change, and in need of a nicer house, Paul Safranek (Matt Damon) and his wife Audrey (Kristen Wiig) decide to go through with the permanent Downsizing procedure. However, things go awry when Paul wakes up to discover that Audrey has changed her mind, leaving him alone in a miniature world. As Paul struggles to determine what his next move will be, he finds answers in Dr. Asbjørnsen, his neighbor Dusan (Christoph Waltz), and a one-legged Vietnamese immigrant/activist named Ngoc Lan Tran (Hong Chau).

The key to good satire is focus. By focusing the energy of your critiques and attacks on a general idea or group of general ideas, it allows you to build outwards, creating the satiric world around you. That way, when you reach the ending, you can bring the hammer down, and allow the weight of the story to really take hold. That’s what it seems like Downsizing was attempting to do here. At the start of the project, things seem pretty solid. The zingers start flying immediately as we learn the state of the world that requires the Downsizing procedure. Like Jonathan Swift’s A Modest Proposal, the idea presupposes that basic lifestyle changes are too complicated, so an absurdly over-the-top answer is the last resort. Only here, instead of devouring babies, the answer is to shrink ourselves down. And when the film remembers that it’s supposed to be a satiric comedy, it works. For example, the Downsizing Procedure itself is a horrifically graphic, over-the-top necessity involving removing teeth, shaving all body hair, and a series of nude male bodies that pokes fun at the commodification of the human body and the invasive nature of Big Business to provide their “promise” of a luxurious lifestyle. Or look at the drug trip that Damon’s character accidentally undergoes, which tells us everything about his mental state in a funny, visually pleasing way. These are funny ways of showing character and motive, and they help to make the film shine when they occur.

However, while sequences like this manage to convince you that there’s hope for the film yet, the film will immediately follow its moments of brilliance with long slogs of nothing. Downsizing forgets that Golden Rule of Satire and immediately loses track of its focus, in every sense of the world. The comedy never builds to a purpose, the story goes nowhere, and things feel too wide throughout – I mean, the film takes place over the course of several years (I want to say twenty years), and yet the characters never age a day. What’s worse, the satire never seems to have a clear idea about what it wants to be satirizing. Is this a film about pollution? Fake liberalism? The suburbs? Big business? The 1% vs. the underprivileged? Each of these ideas are satirized, and each feels upon execution like it is going to be the new focus of the film, and yet it never provides any answers, murky or otherwise. And sure, neither satire nor good filmmaking require you to answer the questions, but it’d be nice to know what the question is so you can have the opportunity to answer it yourself. This is a film with a strong set-up, a murky follow-up, and absolutely no idea how to end things (there’s an end-of-the-world scenario that’s forgotten as quickly and as shoddily as its introduced), and when it forgets to follow through, it forgets to be funny. And when a comedy forgets to be funny, things go downhill not long after.

The acting in this movie is all across the board. Most of the lead actors aren’t necessarily bad, but feel incredibly miscast. Damon feels like he’s playing the entire movie like an Owen Wilson wannabe, and quite frankly, I think Wilson would have been more likable in the role. Meanwhile, Wiig is only ok in what turns out to be a very minor role, but while she has one sequence she sells solely with the use of her eyes, it is hard to watch the performance without thinking of Reese Witherspoon, who Payne wrote the role for. And Christoph Waltz pretty much plays the non-evil version of Christoph Waltz, only this time he does so with a terrible Serbian accent that he often forgets about halfway through lines. Meanwhile, Hong Chau is the film’s controversial star. It’s really hard to get over the fact that her role is pretty much solely focused on having a funny accent and playing a stereotypical Asian character, but Chau is so talented, she can provide several layers of subtext, meaning, and humor to even the weakest of lines. She has one great sequence involving the different ways you can have sex with someone that’s easily one of the funniest scenes of the year. I’m not in love with the role, but I can certainly respect the performance. But personally, if you asked me if the film had any true stars, it would be the character actors and celebrities making appearances in smaller roles. Jason Sudeikis shows up a handful of times playing the perfect critique of suburban yuppies. Udo Kier looks like he could be the brother of Christopher Walken, and I am ALL about it. Margo Martindale, James Van Der Beek, Donna Lynne Champlin, and Niecy Nash all steal scenes as obnoxious friends and salesman that position themselves around Paul and Audrey. And one of the best sequences of the film involves Neil Patrick Harris and Laura Dern as a couple who serve as sales reps/motivational speakers for the Downsizing industry. They get some of the film’s biggest laughs.

I wanted to like Downsizing so much more. Up until now, Payne had never made a bad movie. I still think there was potential here to make a good movie. However, like so many disasters before him, he let the scope and vision of the project get away from him, and the artistry suffered. He did manage to salvage things a little big with the beginning, and there’s certainly some promise to be had here. But with a script this lazy, and ending that bad, and everything else just so generally mediocre, I’m not sure there is anything here worth seeing, either as a Payne film, as a satire, or as a movie in general.