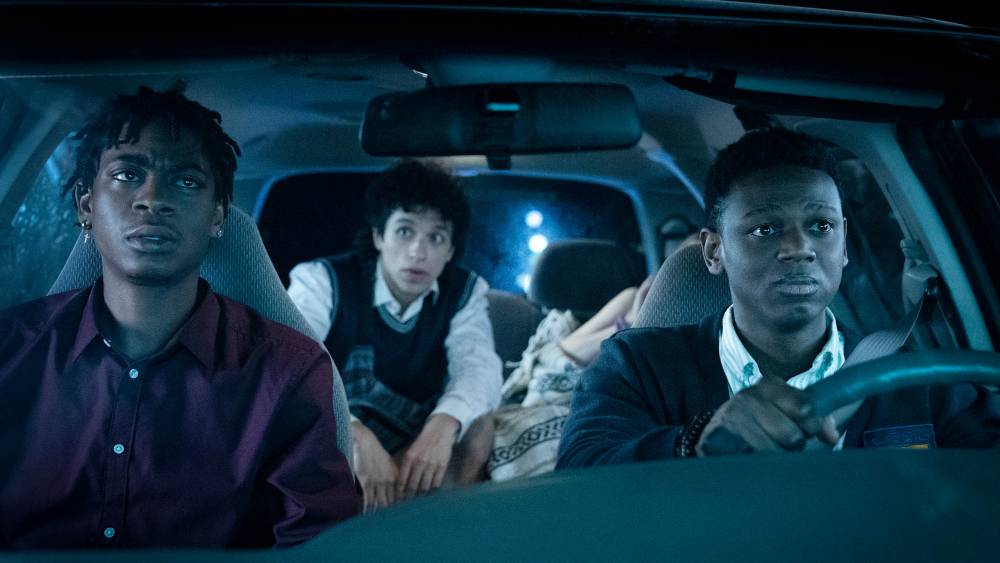 It takes a skilled hand to make something truly terrifying a laughingstock. It has to raise serious questions and shine a light on the subject while simultaneously taking the complete piss out of it. In Emergency, Carey Williams adapts his own short, tackling the ever-present reality that young Black men face when dealing with police. And while the writing sometimes struggles, and there’s about two too many crazy twists in this farcical up-all-night comedy, Williams manages to walk the thin line of film’s social themes with a deft hand, mostly thanks to his three winning leads.

Sean (RJ Cyler) and Kunle (Donald Elise Watkins) have been best friends since Freshman Year, when they bonded as two of the only Black students in their dorm. They couldn’t be more different – Kunle is a straight-laced Princeton-bound son of doctors who abides by the rules at all times, while Sean is your average college slacker who spends his time vaping and drinking. Yet their friendship has gotten them through four hard years of school, and as their Senior Year draws to a close, the duo sets out to accomplish the Legendary Tour: hitting all seven of the college’s fraternity parties in one night.

However, after arriving home from the lab to start their pregame, Sean and Kunle come to a shocking discovery: there’s a passed-out white girl (Maddie Nichols) in the middle of their living room. Kunle’s first instinct is to call the police and get the girl help; Sean is more hesitant – after all, what’s the likely scenario if the police show up to two buzzed Black men standing over a passed-out white girl? And so, Sean, Kunle, and their friend Carlos (Sebastian Chacon) must embark on a trip across town, through a sea of partying college students, drunk girl in tow, in order to get her the help she needs.

Williams possesses a key skill in crafting his narrative: the ability to find the humor inside horrifying, traumatic scenarios. So many comedians and directors love to say they’re using comedy to combat trauma, but it takes a true talent to actually do so. Williams’ characters have honest, painful conversations in smart, funny ways. Upon discovering the passed-out girl (her name is Emma, for the record), Sean suggests, “Let’s call White Sean! He’s a football player, he can’t get in trouble!” As the night progresses, each twist in the narrative plays out a real-life terror in ways that walk the line between horrific and hilarious. What would be an ordinary setback in any other drunken college comedy is here a warning sign of danger to come: their taillight is damaged, they’re stopped in front of a suburban residence and observed by white neighbors, etc.

Each story beat is presented with humorous intent, yet with the knowledge that should the police show up, this could all go horribly, tragically wrong. And Williams knows exactly where that line is. A white couple played by Melanie Jeffcoat and James Healy Jr. almost immediately call the police on the boys when they have car trouble on the wrong street – the credits tell us their names are Mr. and Mrs. Karen. The kicker? As the boys drive off and the couple goes back inside their house, the camera pans past the BLM sign on their lawn. It’s a great punchline to a scene that should be ridiculous, and instead is a painful status quo of everyday life. And sure, not every bit or piece of commentary works – there’s a classroom discussion early in the film surrounding the N-word that feels unrealistic and completely forced. But the script and direction are sharp enough to move past missteps in messaging, keeping the film smart and funny in equal balance for most of the runtime.

The film rests on the back of Sean, Kunte, and Carlos – as characters, and as the actors Cyler, Watkins, and Chacon. As characters, Williams uses their different backgrounds and stories to inform their worldview and host a dialogue without ever becoming preachy or didactic. Kunte is a straight-laced and trustworthy first-generation American, and approaches things with a lawfulness and naïve optimism; his best friend Sean is more carefree, but also wearier of the white folks around them, and the realities of policing in this country (Carlos is mainly there for comic relief). Watkins’ Kunte is forced to go on a deeper journey, which he handles brilliantly, and builds to a terrific big scene and final shot. Cyler, meanwhile, steals the movie as the looser of the bunch, and thanks to a knack for comedic timing and an impressive range, I’d argue he steals the movie. As mentioned, Chacon’s character is mostly an outsider along for the ride, but I was drawn to his laconic delivery and natural acting; he’s an excellent foil for the two leads.

While the film mainly focuses on the trio and their exploits, there are two other performances I’d like to praise: Maddie Nichols and Sabrina Carpenter. Nichols in particular, who plays the drunk girl, gives an incredible performance of physical comedy. Every time her character comes to – if only for a few moments – the film instantly lights up. She’s the film’s secret weapon, perfectly deployed whenever the film needs a jolt of energy or a diversion from the serious subject matter below the surface. Similarly, Carpenter also possesses a knack for physical comedy, but she adds an extra layer to the film, both narratively and politically. As the drunk girl’s sister, Carpenter’s character represents (in ways both hilarious and horrific) the way that justifiable fears and anger can give way to racist undertones. Her journey from overprotective sister to racist monster is worth studying, and far superior commentary to not only the film’s contemporaries, but even scenes in the same film.

Which brings me to the film’s greatest weakness: its own filmmaking. I don’t mean the direction by Williams – behind the camera, he’s a marvel. He knows exactly how to frame a joke, whether it’s a dramatic reveal of a whiteboard-written party plan or one of the year’s most gut-busting sight gags. I won’t spoil it here, but it involves an entire party fleeing down an empty street. No, the weakness I refer to is KD Dávila’s script.

Setting aside the overwrought dialogue the actors are occasionally forced to deliver (for the first fifteen minutes, I strongly considered turning the film off), or the moments the commentary veers from deliberately unsubtle to aggressively on-the-nose, the film has no clear sense of pacing. It keeps throwing twist after twist at the viewer, and while a few narrative kinks can be fun and engaging, after a while, all it does is pad the runtime. At one point it feels like the film should be building to a conclusion when in reality it’s barely the beginning of Act 3. It’s a rookie mistake that undermines the film’s overall impact.

Nevertheless, Emergency is a smart film that engages both the head and the heart. It earns its laughs, its groans, and its scares, and forces audiences to reckon with the harsh realities of policing in this country. The worst thing I can say about it is that it makes me excited for what Williams does next; for now, I’ll settle for funny jokes, righteous anger, and an appreciation for great actors doing their thing.

Emergency is now playing on Amazon Prime; it is also currently playing in theaters nationwide