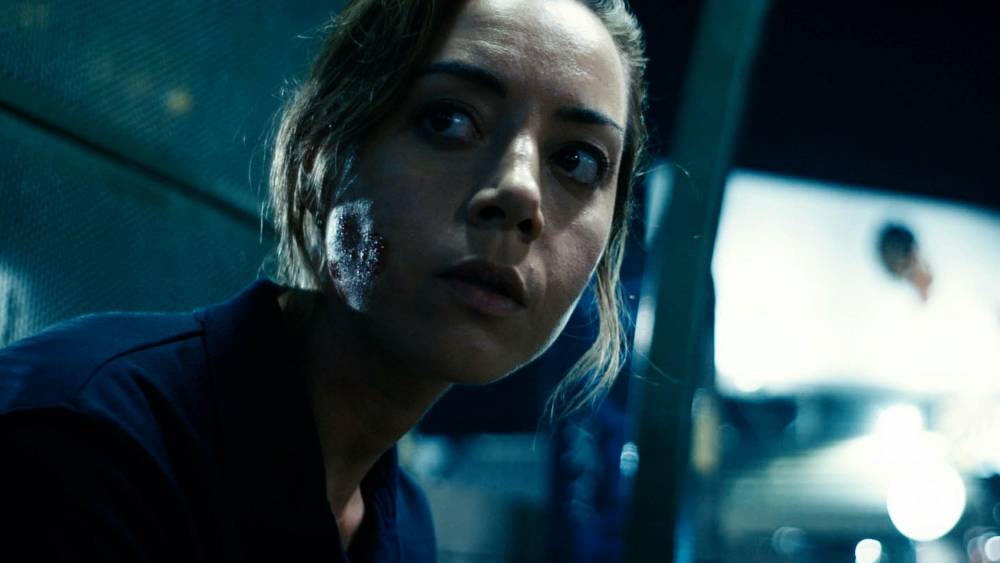 Great art reflects the era it’s created in. It takes the issues pressing society and turns them into genre fare that both intrigues and entertains the audience. Think of Charles Dickens tackling a broken London society in his novels, or film noir reflecting a society on the edge in the 1940s, or the great works of Sidney Lumet exploring America’s worst impulses.

In 2022, there’s no shortage of issues to tackle in the world around us, and John Patton Ford’s Emily the Criminal is no exception. It tackles the broken job market plaguing millennials in a short, encapsulating thriller. And for the first two-thirds of its runtime, it succeeds. If only it had stuck the landing.

Emily Benetto (Aubrey Plaza) is struggling to get by. She works a series of sh*t jobs, unable to get hired in the modern workforce, and handicapped with a criminal record. After picking up a series of shifts and side hustles for some coworkers, Emily finds herself incorporated in a credit card scam – running a series of fake credit cards to purchase big ticket items to sell on the streets. Getting in deeper and deeper, Emily soon finds herself at the heart of the L.A. criminal underworld.

Ford frames his story as a solid, old-school film noir. In many ways, it’s a narrative that could have walked out of the 70s, with the technique of a film from the 40s. After all, the thesis of every noir is that a protagonist with a checkered past can’t find work because of it and is forced to resort to crime. Ford draws from the best, letting his story unfold through strong narrative, great acting, tight editing by Harrison Atkins, and a killer score by Nathan Halpern.

Of course, the film’s beating heart is its underlying commentary. Ford’s screenplay paints a bleak, often funny, always terrifying look at the modern world and the rise of the gig economy. Emily exists in a world of utter bankruptcy, where the system is designed to keep you poor and where shortcuts are the only solution. She’s saddled with student loans she can’t pay off, entry-level jobs require mastery-level experience, and even if she could get a foot in the door, it’d most likely involve a 9-5 unpaid internship.

The only jobs that do hire use titles like “independent contractor” to avoid paying real wages and allow managers and corporations to cut shifts on a whim. When comparing this soulless reality to the alternative Emily is presented with – a victimless crime that leaves billion-dollar corporations a couple bucks short while at least paying a living wage, it begs the question: what’s the real criminal activity here? It’s telling that Emily and her co-conspirator Youcef (Theo Rossi) offer up their dreams for the future with their ill-gotten funds, and it’s not retiring on an island or luxury vacations. They simply want to afford the middle-class American Dream they were promised.

Sadly, as strong as the film’s first two acts may be, the conclusion gets a little too big for the film’s simple ambitions. As the film enters its home stretch, it loses sight of its incisive commentary, changes Emily and Youcef’s characterizations in unearned ways, and undoes much of the goodwill it had previously built up. It’s not enough to sour the picture for an audience, but it does make one wonder if Ford’s ideas were as strong as initially perceived.

Amongst the ensemble, Emily is more of a two-hander. Aubrey Plaza is the one expected to carry the story’s emotional weight (whenever she shows up, you’ll be able to whisper to your date, “That’s Emily The Criminal”), and she does so effectively. Plaza has always possessed a strong sense of realism, and she is no less solid here than she’s been in any of her previous work. The real breakout here is Rossi, who stands tall as the man who teaches Emily how to grift and eventually becomes her partner/lover.

Emily the Criminal is an effective thriller that feels as traditional as it does new. Ford’s script and direction propel the film forward, aided by the performances of its two leads. It’s not going to break the mold or change the game, but it passes the time and makes you think. And at the end of the day, that’s all you want in a noir, a thriller, and a movie in general.

Emily the Criminal is now playing in theaters nationwide