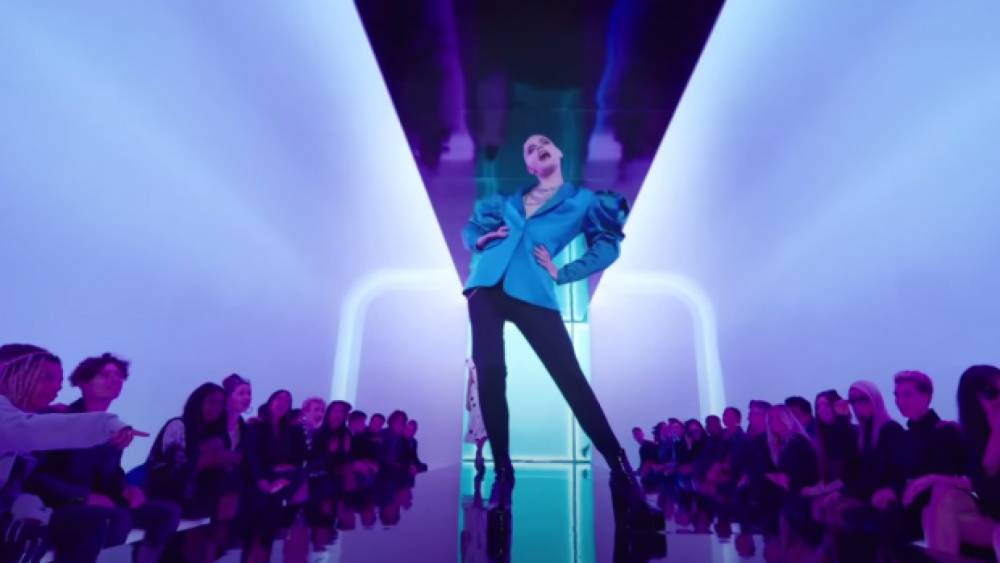 It’s rather astonishing that more movie musicals aren’t set in high schools. After all, Grease is one of the highest grossing musicals of all time, and the hormone and emotion-ridden time in an adolescent’s life marks the perfect place for characters to express their hearts through song and dance. Yet outside of High School Musical, the walls of teenage hell have rarely made an appearance in the splashy format. It’s made the recent spate stand out all the more, from The Prom to next week’s Dear Evan Hansen. In Everybody’s Talking About Jamie, the adaptation of the hit British musical, director Jonathan Butterell delivers a flashy, fun musical sure to tickle the hearts of Broadway fans everywhere. And outside of a botched ending, the film delivers on all fronts.

Jamie New (Max Harwood) has one dream in life: to become a drag queen. It’s not a very common dream for 16-year-olds, especially ones in the small town of Sheffield, England. Jamie is an outcast in his hometown; he hasn’t seen his father (Ralph Inseson) in years, he’s belittled by classmates like Dean Paxton (Samuel Bottomley), and even the “supportive” teachers like Miss Hedge (Sharon Horgan) would prefer he stop making such a scene and embrace order and mundanity. However, Jamie has support from a few close friends, like his classmate Pritti (Lauren Patel), and his incredibly supportive mother Margaret (Sarah Lancanshire). And realizing he needs to prove his worth not just to his classmates, but to himself, Jamie hatches a perfect scheme: to appear at the school prom not as himself, and not just in a dress, but as the fabulous drag performer Mimi Me.

On paper, there’s nothing overwhelmingly special about the Jamie musical sequences. They actually bear a lot of similarities to High School Musical – and not necessarily in a bad way. It’s just a lot of simple, goofy energy, with fun, but fairly routine choreography. However, musical sequences are not performed on paper, and it is in the execution that Butterell makes these numbers – and ultimately, this film – shine. Butterell takes great joy in making these sequences a hoot for audiences to cheer and clap along with. He pays attention to every last detail – the production design, the cinematography, the editing, the energy, all of it.

And when coupled with smart, funny lyrics (a line I keep returning to, because of how much it has to say about Jamie as a character, is “And when I’m old, like 32”) and energetic piano-based instrumentals, the sequences pop right off the screen. There’s a courtyard dance sequence centered on gossip. School janitors suddenly transform into a doo-wop group from the 60s, a-la The Ronettes. And there’s a dazzling black-and-white sequence modeled after Madonna’s “Vogue” music video – a video forever entwined with the drag scene itself.

There’s also a moment I particularly want to focus on, because I’ve never seen a musical number like it – and I’ve seen a lot of movie musicals in my day. Early in the film’s run, Jamie meets Hugo Battersby (Richard E. Grant), who used to be the famous drag queen Loco Channelle, and later becomes Jamie’s mentor. As an introduction to Hugo, the film utilizes an original song, written by Frankie Goes To Hollywood’s Holly Johnson, to demonstrate the history of drag and to provide a backstory for Hugo’s journey. This sequence is, without a doubt, one of the most innovative I’ve ever seen in a movie musical.

In the course of this one song, the characters walk into a video tape and flash back to the 80s gay scene, filled with drinking and dancing at clubs, fist-fighting with Thatcher’s homophobic police force, and sadly, inevitably, watching close friends die from AIDS. The number is bookended with references to Freddie Mercury, a clever touch, and subtly and suddenly reveals that the cameraman whose tape we’ve been watching is Hugo’s lover, who eventually collapses and succumbs to the disease. It’s an emotional, smart, brilliant four minutes, one that forces our protagonist to confront the traumatic roots of his so-called “fun” pastime, and it is the moment that sold me on this otherwise-uplifting and silly film.

Musicals are predominantly only as good as what comes between the songs, and thankfully, Jamie is, for the most part, entertaining in these moments. I think the reason these moments work is because we aren’t subjected to another clichéd coming-out story. This movie isn’t about Jamie trying to come out. He’s already out. It’s abundantly clear he’s out from the moment we meet him. No, instead we get the engaging story of Jamie learning to love himself as he is, and to learn the true meaning of drag. He learns healthy ways to fight against hate, live life to the fullest, and to love himself, instead of hiding himself away. These are important messages for the people who watch a couple seasons of Drag Race and say “I get it” without trying to understand the history.

There are little moments and touches throughout that feel real, earned, and oftentimes, funny. I appreciated the honest, unglamourous subplot surrounding Jamie’s toxic father, who is having a son with his new wife and therefore feels he doesn’t need Jamie anymore. I loved the fact that Jamie’s ability to read helps him stand up to bullies, thoroughly dismantling them through sarcasm and intelligence. And one plot point in particular I want to call out, because of how thoroughly refreshing it is, is the portrayal of Horgan’s Miss Hedge as a villain.

Miss Hedge is a captivating antagonist, mainly because she avoids the homophobic cliches at all cost. In fact, I think it would be inaccurate to call her homophobic at all. Her villainy isn’t rooted in disliking Jamie for being gay. She dislikes him for challenging the status quo of the school, as well as the town – her job as a teacher seems to be telling kids not to follow their dreams because reality will make them factory workers. And on a more personal level, she dislikes him for insulting her. By avoiding the stereotypes and tropes of a character like this, the story feels more didactic than, say, a Love, Simon.

However, it appears that nothing gold can stay, and eventually, the film has to take off the makeup – and unfortunately, this ends up happening before the act is over. Jamie’s screenplay is spotty throughout its runtime, often utilizing dialogue that feels very Broadway; usually, film adaptations like this try to clean up the more stagey dialogue for a more human feel. But this is easy enough to overlook. It’s also easy to overlook the warning signs at the beginning of the third act, when the upbeat musical numbers disappear and are replaced with big 11 o’clock numbers and power ballads sung by individuals sitting casually in chairs. Hey, at least they’re singing beautifully, right? Worst case scenario is these scenes are cutting away from more interesting moments, like a brief sequence on a soccer field that is far too short and adds nothing to the plot.

But then…the final scene starts. And this smart, acerbic story loses all control. Everything finds itself wrapped up with a neat little bow, and oozing treacle and sap. In order to give the film a wholeheartedly feel-good ending (something I am not against, mind you), characters are forced to act against their nature, saying every single thought that comes into their mind without a filter, delivered in profoundly redundant cliches, and ultimately make the right decision, even if they have absolutely no reason to other than plot convenience. It’s the type of ending that feels more in place in a Hallmark movie – or, more accurately, a Disney Channel Original Movie. It’s a shame, too. If the film hadn’t dropped the ball so badly, the film might have been a damn near perfect movie musical.

At least the acting never falters, even as the film itself begins to stumble. A large part of this is because of Harwood’s powerhouse performance in the titular role. Harwood has real star energy from the jump, aided by the fact that he can really sing. His swagger and command over the camera, not to mention his ability to emote, is impressive, and he anchors the role with a likability and honesty most musicals would kill for. Equally impressive is Lancanshire as Jamie’s mother Margaret. Lancanshire has real mom energy, filled with nerves and honest emotions, and she sings the hell out of her big number, even if the film cuts away from her face so we don’t get to see it.

Amongst Jamie’s other friends, I want to provide some praise for Lauren Patel as Jamie’s Muslim friend Pritti. Patel’s role is unexpectedly complex – timid and bullied when facing her schoolmates, yet open and funny and loving with her close friends. This is an incredibly honest portrayal of a character like this, and Patel plays it well. Meanwhile, Richard E. Grant does what he always does: shows up briefly, hams it up, eats the scenery whole, and steals the damn show. He’s not a very strong singer – not quite Russell Crowe bad, but still noticeably so – but he acts so well you’re willing to overlook his hilarious attempts to croon.

The rest of the cast does their duties to the letter, often admirably. Bottomley is what you’d expect in a bully, Horgan in an authoritarian teacher, and Ineson in a homophobic father – I’d say Ineson leads the pack here in performances, at least mining for something deeper in an otherwise-obvious role. Oh, and there are two performers in particular I want to shout out, not because of their screen time, but because of how they use that time. I’m referring, of course, to Kacie Doocey and Saskia Davis as Becca and Bex, the popular girls in school who love to gossip and manipulate. These girls devour every moment they are on screen, sing the hell out of their big musical number, and are simply just a joy to appear. If you’re looking to turn a background performance into a future career as lead performers, watch what these girls are doing. They are remarkable, and I cannot take my eyes off them.

Everybody’s Talking About Jamie is what you look for in Friday night musical entertainment. It’s got wit, charm, and heart. You’ll leave tapping your toes, even if only one or two songs are actually memorable. Maybe you’ll even cry a little. Who knows? The only thing holding me back from a full-throated appraisal is that damn ending. I cannot overstate how sour a taste it left in my mouth. Yet at the end of the day, I don’t find myself thinking about the ending. I think back on the desire to tap my toes, the joy I felt in watching Harwood’s performance, and that incredible “This Was Me” number. And I want people to share in that joy too.

Everybody’s Talking About Jamie will stream on Amazon Prime on Friday, September 17th