‘Everything Everywhere All At Once’ Leads the 95th Academy Award Nominations 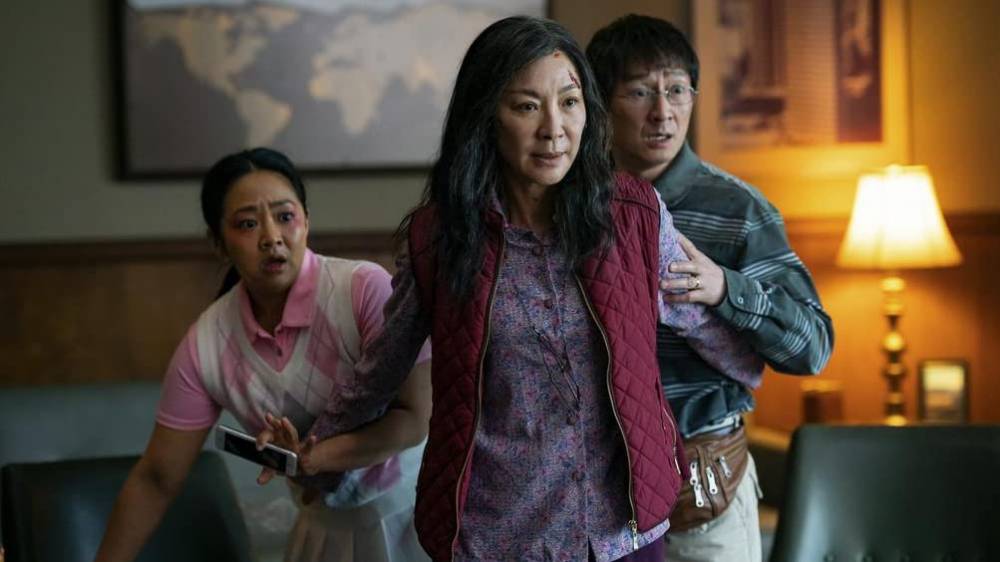 01/24/2023 Travis Burgess 95th Academy Awards, All Quiet On the Western Front, Avatar: The Way of Water, Elvis, Everything Everywhere All At Once, Nominations, Oscars, Tár, The Banshees of Inisherin, The Fabelmans, Top Gun: Maverick, Triangle of Sadness, Women Talking 0 Comments

The 95th Academy Awards are officially upon us, and while there were certainly some snubs and surprises to behold, one thing about them is abundantly clear: they celebrate the impressive nature of a banner year for cinema.

Let’s start with the most exciting news out of the lineup: Everything Everywhere All At Once is your Oscar frontrunner, overperforming expectations with a leading eleven nominations. On top of a Best Picture nomination, all four of the lead performers managed to earn nominations, along with the Daniels as directors and screenwriters, Editing, and surprise nominations in Costume Design, Original Score, and Original Song. Also leading the pack are All Quiet on the Western Front, The Banshees of Inisherin, and Elvis, which earned nine, nine, and eight nominations, respectively – not to mention that All Quiet and Elvis dominated the technical categories, to boot.

Also near the top of the pack were critical and audience favorites, like The Fabelmans, Tár, and Top Gun: Maverick. That’s right, everyone’s favorite fighter pilot sequel managed to earn a Best Picture nomination! It also earned nominations for Writing, Editing, Sound, and Original Song – although it did shockingly miss Best Cinematography, where it was considered a frontrunner. Meanwhile, The Fabelmans managed to get Michelle Williams into the Best Actress lineup, and even managed to pick up a nomination in Production Design. But of the lot, Tár probably had the best day: not only did it earn nominations for Best Picture, Writing, Directing, and Cate Blanchett, but it also managed to pick up surprise nominations in Cinematography and Editing.

Rounding out the Best Picture nominees, Avatar: The Way of Water was perhaps the least surprising of the lot, also earning nominations in Visual Effects, Sound Design, and Production Design. More surprising was the overperformance of Triangle of Sadness, which not only earned nominations in Best Picture and Best Screenplay, but managed to earn a nomination for Director Ruben Östlund. And I’m happy to report that despite an abysmal preseason, Women Talking managed to match its Best Adapted Screenplay nomination with a Best Picture bid as well. Other multi-nominated films include Black Panther: Wakanda Forever with five nominations, Babylon, The Whale, and The Batman with three apiece, and Living, which managed to (deservedly) sneak into Best Adapted Screenplay.

Amongst the biggest surprises of the day, one has to start with the acting races. While Brian Tyree Henry’s surprise nod in Best Supporting Actor wasn’t too big a leap (he was solidly in the mix all season), Andrea Riseborough’s nomination came squarely in the last two weeks, when she encouraged her actress friends to overly promote her unseen film squarely during the voting window, marking one of the strangest, most shocking awards campaigns in modern Oscar history. Sadly, her nomination came at the expense of Viola Davis and Danielle Deadwyler.

Meanwhile, Decision to Leave – perceived by many to be the International frontrunner – found itself shockingly and frustratingly snubbed. Elsewhere, my beloved Pinocchio significantly underperformed – while it earned its Best Animated Feature nomination, it ended up missing Original Score and Song as well (Women Talking also missed out on Score). However, it’s hard to be too mad – after all, this means that “Naatu Naatu” has managed to earn a nomination for Best Original Song, hopefully on the way to one of the most exciting wins in Oscar history.

That wraps up our look at the major nominations at this year’s ceremony. While there’s certainly disappointment to be had at some of the snubs, it’s hard to be too mad at any of these nominees or the surprises. Meanwhile, it’s important to remember going forward with predictions that getting nominated for Editing and Screenplay are borderline essential, so your frontrunners have to be Everything Everywhere, The Banshees of Inisherin, Tár, and Top Gun: Maverick. The 95th Academy Awards will be held on March 12th, hosted by Jimmy Kimmel. You can see the full list of nominees below.

Tags: 95th Academy Awards, All Quiet On the Western Front, Avatar: The Way of Water, Elvis, Everything Everywhere All At Once, Nominations, Oscars, Tár, The Banshees of Inisherin, The Fabelmans, Top Gun: Maverick, Triangle of Sadness, Women Talking