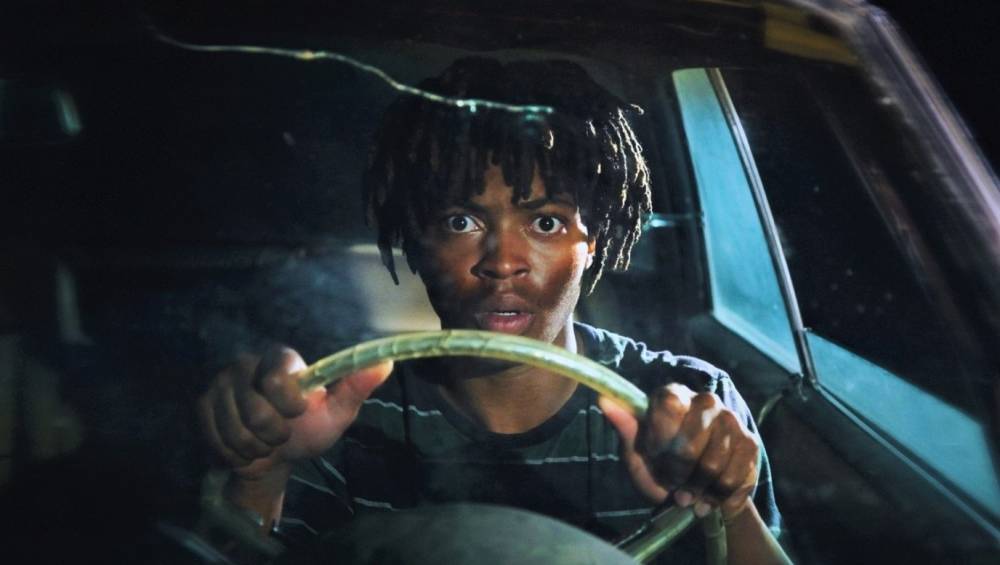 It’s been a long time since we’ve had a film so blatantly trying to copy Quentin Tarantino. After Pulp Fiction made it big, we had almost a decade of bad films trying to be quippy while some violent action takes place, before these knockoffs inevitably stopped making money. I guess in our ever-present effort to recapture the “good ‘ole days,” we’ve regressed back to that era, as directors Manuel Crosby and Darren Knapp have released First Date, an attempt to recreate that quippy-crime subgenre and instead offers up one of the least funny, wholly aggravating “comedies” I’ve seen…maybe ever?

The issues with the film arise in the opening scene, which offers up a weird, inept blend of comedy and tension. Now, these two genres and emotions can pair well together. It’s been done before. And the premise of this sequence is interesting enough. The scene follows a guy getting dumped by his cheating girlfriend while simultaneously getting murdered, blending two terrible scenarios into one ironic punchline. But it doesn’t want to commit to any one mood. It’s not funny enough to lean on the jokes, and the tension isn’t frightening enough to make us fear for this unnamed protagonist’s well-being. Side note: while it is possible I emotionally had checked out and missed the connection, to this day I still don’t know what this scene had to do with the overall plot.

But these issues of tonal mismatching also apply to the overall premise itself. It could be funny: a guy buys a car to try and get the girl, only for the car to make him the most wanted man in the city. But the film can’t make up its mind as to how to tackle this subject. A good portion of this is due to the laziness of Crosby and Knapp’s script, where every line is a cliché and every scenario is horrendously unfunny. It’s never a good sign when you don’t laugh for twenty minutes in a comedy. And that’s before we get to the most tone-deaf sequence involving the police pulling over a young unarmed Black man I’ve ever seen – not even Dirty Harry is this tone-deaf. There are approximately two funny jokes in the entire film: one involving every character assuming that the Chrysler is a different brand of 60s car, and another involving Mike, after having gone through this whole ordeal, trying to explain his night to a frustrated Kelsey. But two jokes in 103 minutes is a dismal stat.

Maybe the lack of jokes could be salvaged if the film had a plot – any plot – to speak of, in order to bolster interest. But even this is a wash, because the plot makes no f*cking sense. Characters just randomly start shooting even when it’s the least logical response, and the geography is so garbled as to leave audiences confused as to where the hell they are at any given time. There’s a scene set in a house that I’m fairly certain is supposed to be the main character’s, but it is so confusingly shot and staged that I’m still not sure. Perhaps this story could have worked if there was any sense of immediacy. After all, the plot is he’s late for a date, there should be a ticking clock, a la Uncut Gems. But there’s not.

Everything continues to move at a leisurely, laconic pace, making us wonder, “Wait, why do I care that he’s late again?” A question given all the more relevance when the plot stops dead for ten minutes so the bad guys – a group of burglars who break into people’s homes to host a book club – can spend ten minutes debating Of Mice and Men. By the hour mark, it is impossible to feel anything beyond anger, and when you eventually reach the third act twist, it will be impossible to feel anything beyond numbness.

Oh, and have I mentioned that every character is unlikeable? The teens, the burglars, the old couple that make poor Mike drive them around to find a place to f*ck in his car…every character is obnoxious beyond any sense of likeability. Actually, I take that back. There are two characters I empathized with, which actually creates a hilarious paradox within the film’s central premise. The first is Kelsey, who is, quite frankly, only barely likable (mostly on the back of Duclos’ charisma). The second – and this is the funniest part – is the hunky neighbor Chet (Brandon Kraus) who also has a crush on Kelsey. We are supposed to hate Chet, because he is the hunky jock who Just Doesn’t Get Kelsey The Way Mike Does. But as we get to know him, and see him interact with Kelsey…why? He’s clearly the most decent and honest character of the lot, and he treats Kelsey a helluva lot better than Mike does. Why should I root for Mike over him?

I’m at the point of this review where I’m getting nitpicky, but you have to understand: I’ve hated this film for almost a year now, so I have a lot of thoughts to get out. There is a sense of twee throwback at the heart of this film that feels much more intertwined with a Wes Anderson film than it does here. For the life of me, I can’t figure out where this film is supposed to take place. This is a world with corded landlines, VHS tapes, and 8-tracks. At first I thought this was intentional, and that the fil was doing a throwback – sort of like a bad 80s or 90s throwback, the way films like Porky’s and Mischief were at one point bad 50s throwbacks. It would certainly explain why Mike just doesn’t call Kelsey to explain that he’s running late. But this is also a world with cell phones and texting and other luxuries, meaning it takes place in the modern world, thus rendering 90% of the plot as nonsensical. They don’t even explain why so many characters have an affinity for old tech, like Under The Silver Lake. We’re just supposed to accept it at face value, something I am incapable of doing with the rest of the inanities.

I don’t really blame the actors, per se. They’re doing their best with this story and script. Tyson Brown is not a bad actor (although he’s not particularly good, either), and Shelby Duclos is a charismatic counterpart. As much as I hated the police characters, Nicole Berry has a fantastic way of delivering lines. I thought the actors playing Mike’s parents (not listed on IMDB) had a funny dynamic, particularly because they seemed like they were trying to escape the film as fast as possible. And then there’s The Captain, an unnamed villain played by Jesse Janzen and at least is making choices. I liked that, after putting up with idiots the entire film, he showed up lamenting that he must be equally moronic to be surrounded by these morons. He also has hilarious sparring chemistry with Duclos, which makes it infuriating that they’re only together for the last ten minutes or so. However, while I do cut most of the actors some slack, I do want to take a moment to state that Josh Felsner, who portrays Mike’s best friend Brett, is the most aggressively bland, aggressively off-putting Nicholas Braun knockoff I have ever seen, and I hated every minute he was onscreen.

First Date is a muddled hodgepodge of bad ideas and stolen concepts. By the time it reaches its big dramatic climax, I had completely checked out. Hell, I’d done that by the thirty minute mark. This could have been a fun film – there’s a lot of potential for a Harold and Kumar-esque romp at its center. But it just refuses to commit. It is bad writing on top of bad directing on top of mediocre acting. And when it finally ended, it had been amongst the longest 100 minutes of my life.

First Date will begin streaming on Hulu tomorrow, October 29th, and will also be available on VOD. Even free is too much to pay