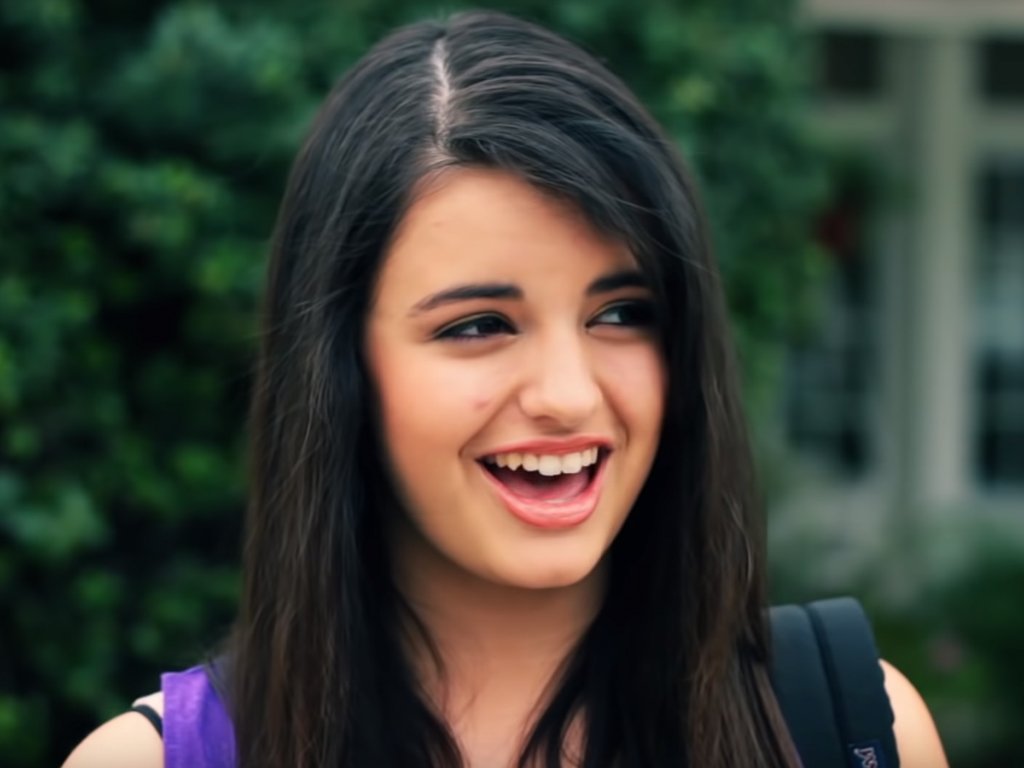 Ten years ago this Sunday, March 14th, American culture was changed forever. While the song in question was originally released on February 10th, it wasn’t until its debut one month later, complete with a YouTube video of equal renown, that it became a pop culture phenomenon, traversing the late-night circuit, shared among friends on social media, and talked about on the then-budding Twitter beyond recognition. I’m talking, of course, about the seminal debut of future pop star Rebecca Black, “Friday.”

For those of you who don’t quite remember the history of the song, “Friday” was a song written by Patrice Wilson, the founder of ARK Music Factory. Somewhere between a gag gift company and a scam, ARK offered teen singers the opportunity to become pop stars through $4000 videos. Mostly purchased as birthday gifts by rich parents, ARK allowed kids to come to their studio with “professional” recording producers, let them pick out a pre-written song (usually with ridiculously bad lyrics about a common-day occurrence), and record the song, with the added bonus of a music video thrown in. There were, however, a few catches. First, despite claiming their producers worked with Miley Cyrus and The Backstreet Boys, no one on the team actually had experience in the music industry. Second, ARK had full power and ownership over how the songs were released, played, and shown – once the artist signed the contract, Wilson could do whatever he wanted. And third, the artists were not allowed to change the lyrics, and had to agree to a solo verse for Wilson, whether it fit the mood of the song or not. 13-year-old Rebecca Black agreed to these terms as a birthday gift from her L.A. parents, and once Wilson realized how many people loved to hate the song, the rest became history.

It is at this point I want to level with you all: I f*cking adore this song. I always have, and I always will. Certainly there’s a level of schadenfreude involved, I’ll be the first one to admit that. But none of that is focused at the 13-year-old Black, who was the same age as most of my friends’ sisters when this song came out (to help contextualize how old I was). In fact, I was kind of impressed with Black’s performance. She is truly singing her heart out on this silly, stupid song, and while no one wanted to admit it at the time, anyone with half a brain (so, apparently, not most Americans) could tell that she was f*cked over by Wilson’s over-production of her voice. I loved that someone could so passionately take a song with lyrics as dumb as “Yesterday was Thursday, today is Friday/Tomorrow is Saturday, and Sunday comes afterwards” and treat it like “La Vie en Rose.” This song has played more times in my household than any of the past Songs of Summer. Hell, I had to Google the Song of the Summer for 2011 to remember what it even was (it was “Party Rock Anthem,” FYI), because that summer I very clearly remember driving around my Michigan hometown, windows down, blasting “Friday” – and only “Friday” – at full volume while chugging a McDonald’s milkshake. At a barn party I attended (in case you were wondering how small my hometown is), I stood on top of a hay bale and led a group of choir kids in a sing-along. Honestly, that may have been the best summer of my life. This is the music of my coming-of-age.

In the aftermath of the video’s release, “Friday” received an excessive amount of focus, in a variety of ways. Even then, I was always defensive of how people were responding. While the song’s goofy lyrics were certainly fair game, the culture was already evolving to a place where it should have known better about mocking and bullying a 13-year-old girl. The usual suspects (like Jay Leno, who is almost always on the wrong side of humor, and always has been) used her as something of a punching bag. Others weren’t exactly great, but treated the singer with respect – one of my favorite parodies involved a charity performance by Stephen Colbert, Jimmy Fallon, and a surprise Taylor Hicks cameo, which was performed completely straight. But something that no late-night performer or parody artist seemed to comment on or understand was how dirty Black had been done by Wilson. Even at the time, there were actual videos of Black singing without autotune that were…not that bad. I mean, they weren’t great – even Rebecca would admit to that. But they were no worse than a video of, say, a young Taylor Swift or Katy Perry. The reason her voice sounds off in the song is not that she’s a bad singer, or untalented: it’s because someone with no understanding of music butchered her voice on a tape and released it to the world for his own personal profit. Most musicians seemed to realize this: some even performed “Friday” during shows as a sign of support, like Perry and musical comedian Bo Burnham. But most listeners still seemed unable, or even unwilling, to tell the difference. I’ll never forget playing a recording of Black performing a stripped-down rendition of “Wrecking Ball” for a former friend who openly lambasted Black every chance she got, only for her to call the performance “lovely” and “a future star” before becoming angry I’d tricked her like that (we later had a falling out when she took a hard-right turn into an anti-vaxxer, so her opinions really don’t mean much to me).

Today, the people involved in the cultural touchstone have all seen their careers morph and change. The music video went through several legal cases, mostly surrounding Wilson’s attempts to hustle money out of the song and blaming Black (who was, again, 13-years-old) for ruining everyone’s fun, before the video shifted back to Black’s ownership. Wilson later found a new muse in Alison Gold, who went along with Wilson’s insane schemes for four songs: “Chinese Food,” “ABCDEFG,” “Shush Up,” and “Skip Rope.” As for Black, her story has much more of a happy ending. With her debut song setting expectations so low, her future albums allowed her to show off her range in new and surprising ways. Her follow-up songs “My Moment,” “Person Of Interest,” and “The Great Divide” managed to develop a fan-base, thanks to their shifting genres and focus on musical ability as opposed to flashy gimmicks. She later became an LGBT+ icon in the same vein as Cher and Lady Gaga, and her first song after coming out as queer herself, “Girlfriend,” both touched on this fanbase while equally crafting one of her best songs to date (see below). And earlier this year, she released an electro-remake/spoof of “Friday,” remixed with frequent collaborator Dorian Electra, Big Freedia, and 3OH!3, which was met with humor and applause by most corners of the Internet. I’d say she’s doing pretty well for herself.

So it is at this point I ask myself: why? Why did we as a culture choose to demonize this child? Are that many people too stupid to realize how autotune works? Are we that cruel as a society that we take pleasure in the pain and torment of a child? Is Black the victim of the same bullying mentality that we used on Brittany Spears and Lindsay Lohan, where we mocked their flaws until they mentally cracked so we could then take pleasure in their mental breakdown? Or am I being too cynical about society, and people have the same amount of loving nostalgia for this song that I do? I’m honestly not sure. I’d like to believe in the good of humanity, but that continuously lets me down across the board. After all, I still have not heard of anyone admitting to loving this song on a legitimate level. Maybe they never knew the joy of driving through a small town, window down, wind blowing through their hair, and letting this honestly-joyful song perfectly capture the life of a teenager after school lets out on the last school day of the week. I feel sorry for those people.