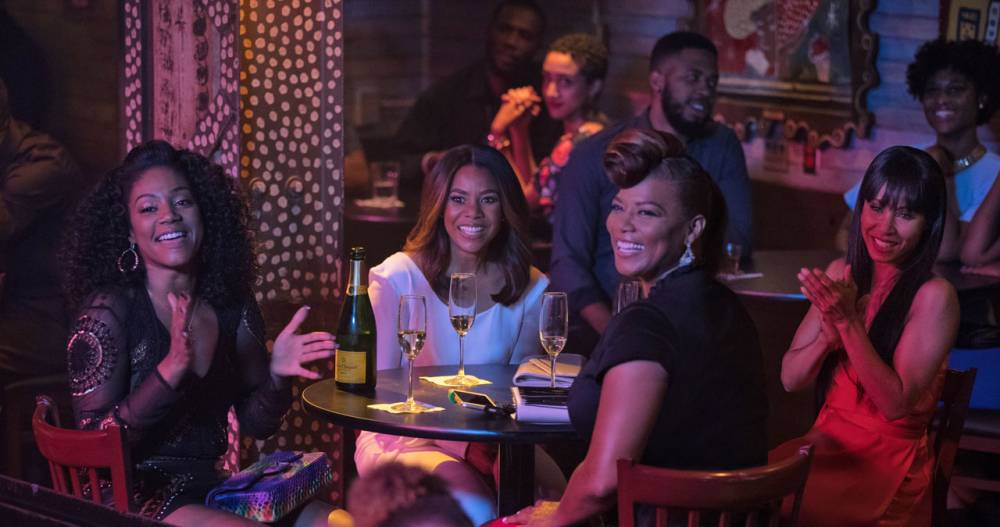 There’s really nothing new in Girls Trip. It’s so clichéd that they literally have a scene introducing characters via “Classic [so-and-so], so uptight all the time,” “Classic [such-and-such], overanalyzing everyone.” If you’re looking for something that’s going to subvert expectations, this probably isn’t the film for you. However, if you’re looking for a good way to kill a couple hours (even if it shouldn’t be a couple hours), then you really could do a lot worse. The cast and director are game to make the writers’ best material soar just enough to glide through the painful.

It’s been five years since the Flosse Posse, a group of four college friends, last saw each other, splitting on lukewarm terms. Ryan (Regina Hall) has become an Oprah-esque self-help guru with the perfect job and the perfect man in retired football star Stuart (Mike Colter), Sasha (Queen Latifah) is a journalist-turned-gossip columnist who runs the failing Perez Hilton/TMZ-style blog Sasha Says, Lisa (Jada Pinkett Smith) has gone through a divorce and is living with her mother and two kids while working as a nurse, and Dina (Tiffany Haddish) has refused to grow up, going out every night and living off of sex, drugs, and hip-hop. When Ryan is asked to give the Keynote Address at the Essence Music Festival, she decides to invite her crew along with her for a weekend of rekindling. What follows is a weekend that will change their lives forever, through booze, men, shenanigans, heart-to-hearts, and most importantly, the power of female friendship.

I’m really fascinated by the script of this movie. There are two different credited writers, and you really feel that watching it. I have to assume the best lines are written by Kenya Barris, who created the fantastic television show black-ish, because it sparkles with his wit. Like his show, he’s not afraid to delve into more serious issues, like divorce, Internet culture, and even the relationships between women (although I’m sure cowriter Tracy Oliver had some input on that). Unfortunately, when it jumps to the second writer, you can feel that shift. You can feel it leaving the hands of a talented writer and entering the hands of someone lesser. I’m sure Oliver is quite talented, but I get the feeling that an unnecessarily vulgar and racially tone-deaf white assistant was a creation of her concoction. It’s not the worst part of the movie, and at best, she plays like the coworkers on black-ish (could Barris have been responsible for this?), but Kate Walsh feels miscast, and the material ends up padding and slowing down the film’s funnier material.

Speaking of padding the film, man, does this film feel unnecessarily raunchy. I have no problem with filth onscreen – some of the funniest films out there are centered around filthy jokes – but the problem is only half of them feel necessary. It’s almost like the film alternates between well written and laughing because it’s naughty. For example, there is a great scene where a hobo flashes the quartet when they check into a horrifyingly filthy hotel. It’s funny not because of the dirtiness, but because it has a point – it demonstrates how disgusting the hotel is. Another great filthy scene comes with the now-infamous Grapefruit Scene, where Haddish demonstrates for the table the Grapefruit Technique using two pieces of fruit. It may not serve a point, but the actors invest themselves so wholeheartedly (my God, does Haddish invest herself) that you can’t help but laugh. And it has a payoff that’s just as funny, if not more so.* However, while these sequences understand the key to comedy, other sequences feel raunchy just to be raunchy, which is the death-knell of so many great comedies. I’m referring to monologues about “booty holes,” and characters riding a bike cowgirl style, and of course the zip-line scene. There’s a scene in the movie where Jada Pinkett Smith gets stuck on a zip-line while struggling not to pee. Incapable of controlling her bladder at her age, she unleashes an explosion of urine over the people walking the streets of New Orleans below. Amused, Haddish follows along, spreading her legs and releasing her own stream, much to the audience’s amusement. Now, perhaps there’s something funny to be grasped here – perhaps women in their forties understand not being able to hold their bladders – but as presented, it just feels unnecessary, and worse, unfunny. If the film had cut sequences like these, which add nothing to the plot and are relentlessly unfunny, they could have had a strong 1:45 movie that would be one of the year’s best.

However, while the script may have major issues in its comedy and its clichés, the direction is alive and exciting. Malcolm D. Lee has proven time and time again that he knows how people, especially tight-knit groups of African Americans, interact. His comedy is derived from the workings of their upper middle class, and while they might not be the best role models for young people, they are always positive images that people can relate to, as opposed to countless portrayals as drug dealers and poverty stricken. He can make his characters seem three-dimensional, even when they boil down to a series of formulaic plot points and catchphrases, in a way that no other director is capable. And he brings to the film an exciting eye that makes things sing, from an exhilarating dance-off to a laugh-out-loud master-class in comedy when the main characters down absinthe. Lee is responsible for keeping the film from sinking over the weight of the film’s script problems.

Something else working for the movie’s benefit is the setting. It really paints Essence Fest as something that you want to be at. Not only that, it’s something that can speak to the film’s core audience: African American women. The festival allows for appearances by Ne-Yo, Maxwell, Common, Sean ‘Diddy’ Combs, Estell, Ma$e, Lorraine Toussaint, and Ava Duvernay. It’s something of a who’s who for African American talent. And while at times, the film’s direction can almost feel like a documentary of the festival, losing sight of the plot completely (again, this movie is too long), that’s actually something incredibly important. It allows that core audience to revel in the talent of their culture, and even adds something to the plot. If something this fun is going on, it would make sense for the characters to want to have as much fun as possible, and ergo for audiences to want to watch these shenanigans. Sure, by the end of the film I feel like I walked away from a commercial for Essence Fest, but there’s really not anything wrong with that.

Honestly, the rest of the cast is interchangeable – whether they’re good or not is irrelevant as long as the main quartet is solid. And while they all do a passable job (with the exception of Walsh, who should never have said yes to that script), this film belongs to four incredibly talented African-American women. All four are smart, strong, funny, and willing to do whatever the film asks of them. Latifah is probably the least memorable of the four, mainly because she doesn’t have anything majorly emotional or majorly hilarious to do or say, but she’s never been bad in anything, and I don’t know why she would start here. Plus, she f*cks a chair. And that’s great. My two favorites in the film come from the middle ground characters, Hall and Smith. Hall is one of the best actresses in Hollywood right now, consistently putting out funny, intelligent work as both a leading lady and supporting player. Here, she gets to lead the ensemble as the closest thing to a straight man, and she gets to use her comedic timing with the film’s best dialogue. She also gets the emotional arc, which of course she handles flawlessly. Meanwhile, Jada Pinkett Smith plays the group’s “straight-laced” one that you know will let loose by the end, and she absolutely does – right on a man’s overly large unit (and an imagined hologram). It’s not quite an original role, but Smith plays it deftly and creates perhaps the most realistic character of the bunch. However, if there’s anyone you’re going to walk away from this film remembering, it’s the mostly unknown Haddish. My God, does Haddish throw herself into this role, physically and mentally. She relishes each line, each action, like she’s performing the highest Shakespearean monologue. Sure, Dina isn’t the most realistic character in the world, but like Tommy Callahan, Bluto Blutarsky, and Megan Price before her, she uses her physical and verbal prowess to win audiences over. As mentioned above, that grapefruit scene will go down as one of the most memorable comedic performances of recent years, alongside The Lemmon Scene in The Wolf of Wall Street and the Bathroom Scene in Bridesmaids.

Girls Trip should be a lot funnier and a lot stronger than the final result. It had a fantastic cast and a great director. It had a handful of hilarious scenes that kept audiences giggling throughout. And it had an interesting premise for people to connect through. However, the script was too muddled, sequences were too raunchy, and it went on about thirty minutes too long. Maybe a truncated cut would have made this a comedy staple. It seems to have built up a strong following as is, so perhaps I’m in the minority (as mentioned, my audience seemed to like it a great deal). However, considering how funny its best sequences were when compared to how bad it was at its worst, it comes out to a fairly average, somewhat forgettable romp that will leave you with conflicted emotions.