HomeReviews‘Glass Onion: A Knives Out... 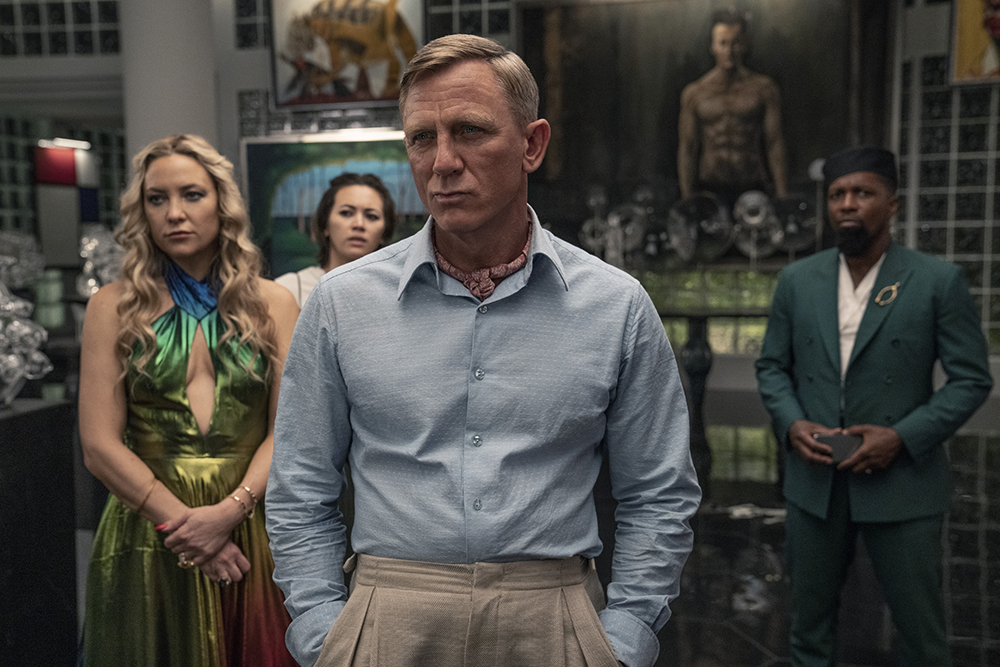 Can a sequel ever surpass its predecessor? It’s a question that’s plagued audiences and critics alike for decades, debating if it is indeed possible for lightning to strike twice. Personally, I’m skeptical of any sequel’s chances – it is a once-in-a-blue-moon phenomenon, at best. So expectations were not high, at least for me, approaching Glass Onion, Rian Johnson’s sequel to the 2019 smash hit Knives Out.

While I greatly enjoyed the murder mystery when I first watched it at the dawn of the pandemic, I’ve been recently wondering if I’d been caught up in the moment, overpraising a fine revival of a dying genre. Upon seeing Netflix’s riskiest investment to date ($400 million for three sequels!), I realize that Johnson’s series has lost an inch and gained a mile. While I was less impressed with the mystery this time around, the plot and hijinks surrounding it may, indeed, surpass the predecessor.

Also present on the island is world-famous detective Benoit Blanc (Daniel Craig), who has been going crazy without a case to solve during the pandemic and is desperately in need of a mystery. Blanc was sent the same puzzle box invitation as the rest of the guests – the only problem is, it didn’t come from Miles. As it turns out, someone at the party may really want Miles dead. And when the bodies start falling, it’s up to Benoit Blanc to solve the case before it’s too late.

The question, and ultimately greatest hurdle, facing Glass Onion is whether Johnson is capable of following up Knives Out’s uproarious success. It’s a deceptively tricky feat; unlike your average actioner or comedy, Knives Out worked because of the element of surprise. The film felt new and different, and several of the gags revolved around the debate over whether Benoit Blanc was actually a good detective or not. Now that the secret is out, and Johnson’s mysterious hand has been tipped, how could Glass Onion live up to the hype?

The question remained worrying throughout the film’s first ten minutes, a rather flat introduction to all the characters and their individual quirks. Unlike, say, Knives Out’s careful introduction to the characters and methodical establishing of their relationships and motives, Glass Onion slaps together an elaborate sequence involving the primary characters and a puzzle box. And sure, there are some solid jokes during the scene, and the puzzle box is clever. But it all feels a little too haphazard, the dialogue a little too on-the-nose, to the point that one begins to wonder during these opening moments, “Oh, Johnson couldn’t replicate the magic, what a bummer.”

But just when one might start to get worried – about the end of the first fifteen minutes or so – the characters arrive on the island, the plot begins moving, and suddenly Glass Onion comes to life. And once that spark is found, it never dims for the following two hours. While the main mystery is kinda obvious (although Johnson does utilize some cinematic trickery to throw you off his scent), the story’s central themes are surprisingly better integrated than the predecessor.

Knives Out was a fun mystery, and its themes surrounding the relationship between wealth and politics were a bit heavy-handed. Here, the idea of the obnoxiousness of the elites are still present – and biting, topical ones too, what with the film surrounding an Elon Musk type. Yet these themes feel more like a natural element of the story at large, as opposed to buzzwords tacked onto the mystery. Johnson revels in showing these characters’ awfulness with clever jokes and feats of physical comedy, and whenever you worry the story’s losing steam, the story changes directions and makes the whole damn thing better.

Sure, the film is not without its flaws. The cinematography often feels smooth to the point of disinteresting flatness. The runtime is about ten minutes too long. And the ending, while never drastically or detrimentally, remains a bit fumbled after the logical, joyful chaos that came before. Yet even the missteps show their promise – mostly involving what Johnson can do with Netflix’s f*ck you money. The finale features some of the film’s (and maybe the year’s) best needle drops, and still manages to earn some laughs along the way. And for every shot Netflix’s algorithm has ruined, there’s one that just oozes radiance. It’s not perfect, but it is far more than adequate.

Amongst the ensemble, everyone shows up pulling their weight – although some shine brighter than others. Craig is still having a blast as Southern dandy detective Benoit Blanc, and I appreciate the film for granting him some feats of physical comedy to perform this time around. Norton, meanwhile, is having a blast as Miles Bron, a lovably pompous Elon Musk type. Each ridiculous line rolls off his tongue like fine silk – including a reveal of Jared Leto Hard Kombucha. Hahn and Odom are both solid in their roles, if ultimately straight men, while Bautista is a terrific thick-skulled moron.

I do wish there was a little bit more from the great Jessica Henwick and breakout performer Madelyn Cline – both give strong turns with underwritten roles. But I’m willing to concede their underutilization in exchange for the performances of the film’s best-in-show stars: Kate Hudson and Janelle Monaé. Monaé’s character takes some time to acclimate to – for most of the first act, they’re a bit of an enigma and a disappointment. But by the time the film starts swinging, Monaé’s swinging with it, and ultimately runs away with the film. As for Hudson, holy sh*t does she play a ditzy, controversy-prone celebrity. It’s great fun to see her enjoying herself onscreen again – she hasn’t been this good in at least a decade.

Glass Onion: A Knives Out Mystery is the perfect type of holiday season escapism. It’s a smart, light romp, filled with great celebrities chewing scenery in a way that never overloads or offends the senses. Johnson has proved that Knives Out was no mere fluke, and that Benoit Blanc is every bit as delightful as we hope and remember him to be. Now, after Brick and The Last Jedi, would I prefer that Johnson continue to make new, original, exciting pictures? Absolutely. But if every Knives Out sequel is as sharp and as funny as Glass Onion turned out to be, I’m suddenly less concerned with the two more coming down the pipeline.

Glass Onion: A Knives Out Mystery will premiere on Netflix tomorrow, December 23rd