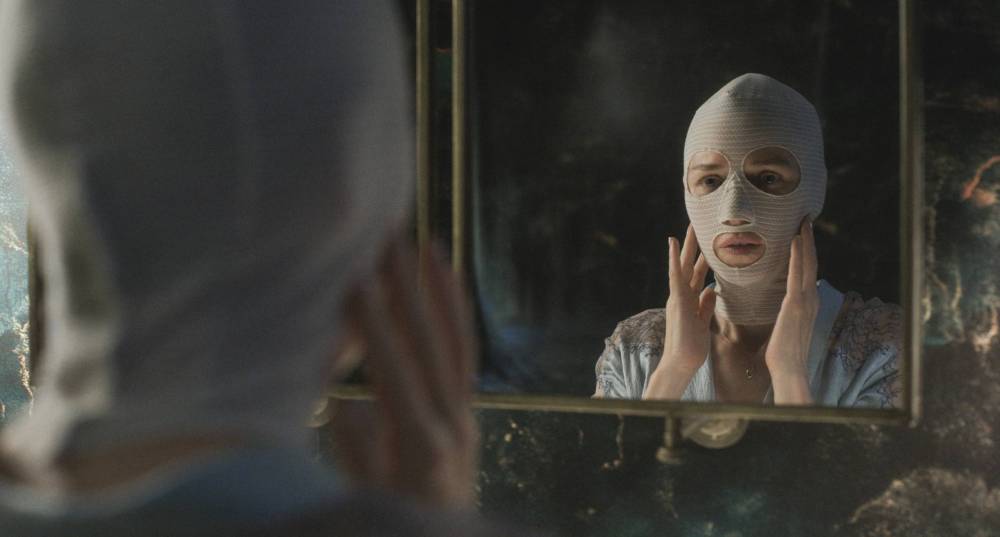 Are we at a point where I can start copy-pasting my reviews of American remakes of foreign language films? Every single outing consists of a SparkNotes version of the original, albeit with the eye-catching and scandalous moments that made them memorable scaled down past the point of neutering – it’s full-on castration. Such is the case, as it always tends to be, with Amazon and Matt Sobel’s remake of Goodnight Mommy, the 2014 German film that arguably launched the modern horror renaissance. It is the bare minimum of a film, repeating known plot points on a slow journey to a tepid finale, nowhere near the taboo shocks of the original.

Brothers Elias (Cameron Crovetti) and Lukas (Nicholas Crovetti) are dropped off at the large estate of their mother (Naomi Watts), an unnamed famous actress. Their mother has recently undergone plastic surgery, requiring a full-facial bandage. However, they are soon unsettled by their mother’s appearance and seeming distance – she seems more interested in drinking wine and dancing than taking care of her boys – not to mention her seeming reluctance to participate in old traditions. Elias and Lukas soon come to the only logical conclusion: that this woman in the house is an imposter, and she’s done something with their beloved mother. And so Elias and Lukas must do everything in their power to protect themselves from this stranger in the house, and find out what happened to their mother while there’s still time.

Sobel and his screenwriter Kyle Warren put in the bare minimum in adapting the terrifying original for an American audience, implying they are too dumb or too lazy to read subtitles. There is no effort to amplify the story’s themes – indeed, any sense of message or moral finds itself excised – instead emphasizing a desire to rehash scenes beat for beat, shot for shot, whether it makes sense or not. Take, for instance, the detail that the mother insists the shades be drawn at all times, supposedly to aid her healing process. Such dialogue is present here, and yet the house – and the film itself – is constantly sunny, making the line ridiculous in retrospect. They didn’t even bother changing the kids’ names, inexplicably maintaining the German sounding-and-spelled “Elias” and “Lukas.”

The film very rarely veers off the beaten path; although this may not be a bad thing, given the changes it does make. In order to, again, appeal to the lowest common denominator, Sobel and Warren sacrifice all the horrific imagery that made the original film so unique. There are no risks here; even the jump scares have no tension, and never come close to the realm of horror. It doesn’t even dare to touch the original’s shocking climax, instead performing it in the most chastely inoffensive way possible. Perhaps even worse, it tries to make its ending emotional as opposed to scary, which instead makes it silly. The only change that does work is a tweaking of the film’s still-the-same twist, which is in fact Americanized in a way that makes hauntingly bleak sense.

There’s not really much to write home about in terms of the acting – the film is essentially a three-hander, with the appearance of two passably-portrayed cops in the third act, played by Crystal Lucas-Perry and Jeremy Bobb. The Crovetti brothers are perhaps best known for playing the creepy twins on Big Little Lies, and Cameron as the creepy kid from The Boys, so their efforts as creepy twins here are…fine, I suppose. I never really bought them in the roles, but they certainly aren’t bad. Watts, meanwhile, is equally “fine,” although she mistakenly plays the Mother as too nice. It makes no sense that the kids would be terrified of her, or doubt her insistence that she’s their mom. That said, she does nail the film’s final scene, so kudos to her.

Goodnight Mommy is the bare minimum that a film should be. It’s shot pleasantly enough so that it looks like a real movie. The actors are saying lines, so it sounds like a real movie. And yet, it isn’t a movie. It is as though someone had turned on the subtitles on the edited-for-TV version of the original film, and the dub was performed by someone who didn’t speak German without a copy of a translation. As I sat in the theater growing more and more dejected, I began to wish that the audience I watched with had had the chance to see the original, and could hoot and holler and scream the way God intended. From their equally dejected reactions at the end of the film, something tells me they did too.