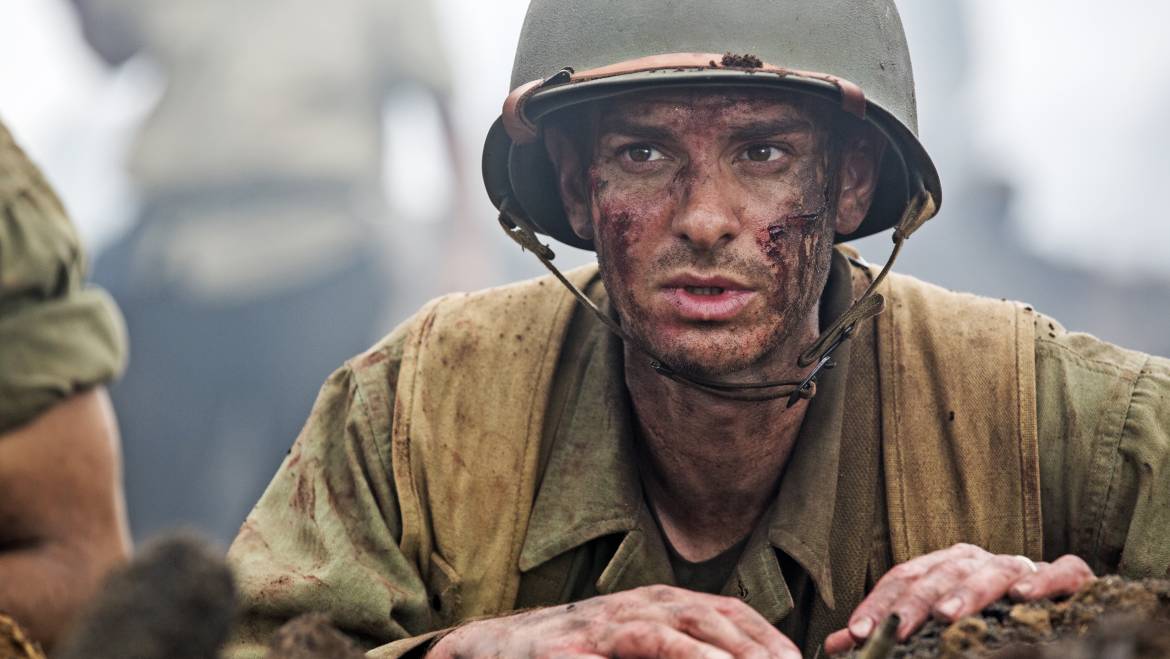 In a lot of ways, Hacksaw Ridge is very similar to 2014’s American Sniper. They both claim to have an antiwar message despite featuring gratuitous violence, they both focus on an American hero just doing his duty in the face of the enemy, and both feature sloppy filmmaking and editing. Hell, they even follow the exact same story structure: start in the middle of battle, flashback to childhood to show where his morals come from, fast forward to adulthood where he awkwardly courts a pretty girl who will only be there to support him and have no other emotions or plot points, then put him through training before he wows the world with his talents. However, there are a few key differences that make Mel Gibson’s newest film (and first in ten years) the vastly superior film: whereas Eastwood’s film fails to show us why Chris Kyle is a hero, or why anything he did has any impact on the world, Gibson shows America an example of someone who truly did what he thought was right, stuck by his faith and his convictions, and threw himself into danger to, as he puts it, “put a little bit of this world back together.”

The film follows the life of Desmond Doss (Andrew Garfield), from his childhood to his days in the army. After a rough childhood, filled with fights with his drunken, abusive father, Doss found solace in his faith as a Seventh Day Adventist. When World War II starts up, Doss decides to enlist as a medic. However, due to his strict interpretation of the Sixth Commandment (“Thou Shalt Not Kill”), he refuses to even pick up a gun, let alone fire it to kill the charging Japanese. This earns him scorn from his fellow soldiers, who see him as someone trying to take the moral high ground and claim pacifism. However, when the sh*t hits the fan on Hacksaw Ridge, the focal point of Okinawa, and his squadron is forced to retreat, Doss stays behind, risking his life several times over to rescue as many men as he can. In total, Doss saves 75 men singlehandedly, and is the first conscientious objector to win the Medal of Honor.

South Park famously has a bit from 2008 where, after years of insulting Gibson for his real-life outbursts, they note “Say what you will about Mel Gibson, but the son-of-a-b*tch knows story structure.” I bring this up because it is especially true about Hacksaw Ridge. While this film could have been many things-a Saving Private Ryan knockoff, a God’s Not Dead style snoozefest, an American Sniper knockoff, etc.-Gibson has a clear vision for the story that he wants to tell, and by God he tells it perfectly. While Private Ryan shows the horrors of war with a kind of awesome undertone (D-Day was horrific, but isn’t Barry Pepper so cool when he snipes that guy?!?), Ridge shows war in all its horror-sure, these soldiers are brave for charging into battle, but war is hell, and most people die horrible, bloody deaths. While a PureFlix film might make it seem like Doss only survives or does these things because he’s faithful, and the rest of the people die because they’re atheists or worse, Gibson balances it-Doss succeeds because of his powerful faith, but it’s more an act of divine inspiration rather than God playing favorites. And while Sniper shows us a guy who could shoot really well, shows his worst traits, and says he’s awesome because of these terrible traits, Ridge shows us exactly why Doss is so great-he’s a man who stuck by his convictions, despite the efforts of his own friends, and acted bravely and extraordinarily, while remaining humble the entire time. It’s a conceptually well-made movie.

Unfortunately, there’s a lot of stuff that doesn’t catch up with the filmmaking. The first issue is the clunky script. Every line is predictable, each plot point is drawn in crayon, and outside of Doss, every character is one-dimensional: you literally meet the other soldiers with a vocal description of their most obvious character trait. While I like the decision to actually show where Doss’ convictions come from as a child (instead of showing a bunch of nonsensical moments like in American Sniper), the first hour or so of the film drags so much, it begins to feel like a chore. And while it’s made passable by Gibson’s incredible directing skills, even he is rusty after ten years in director’s jail. While he used plenty of gimmicks in directing Braveheart (a great film) and The Passion of the Christ (a film I defend despite understandable critiques), they are out in full force here. There’s thousands of examples of Gibson’s favorite technique, the slo-mo shot, in this film, whether necessary or not. I’ve also learned that there is a limit on how violent a film can get before it just becomes laughable, and Gibson found it with The Passion. The violence is so gratuitous from the very beginning of the fighting, you can’t help but laugh, despite the horrors of the carnage, because there’s no other response. However, I will say that once you adjust to the bombastic nature of the staging, the horror Gibson wants you to feel begins to take hold. And on a final note, can we finally retire the “Messiac” image in film, where a saint-like character is shown illuminated by sunlight as his arms go outwards like Jesus sacrificing himself? That image has been done so many times it has lost all meaning.

The acting in the film ranges from pretty decent to laughably bad. Garfield brings a heart and a geniality to Doss that makes you root for him, but he also does so with one of the worst accents I’ve ever heard in a film. Meanwhile, Hugo Weaving’s performance as Doss’ alcoholic, PTSD-ridden father has some cheesy, over-the-top moments, but he does struggle with his constraints to find some pathos in the character. Teresa Palmer is about exactly what you’d expect from the wife role in an army film, although I guess she plays the part well. And of all the fellow soldiers, Luke Bracey makes the biggest impact as Smitty, the soldier who starts out hating Doss before coming to respect him (as one does). It’s a cliché role, but Bracey never overacts or underacts, playing it right where he needs to. However, if there’s a performance I want to focus on, it’s Vince Vaughn as the Boot Camp Sergeant who trains Doss. Vaughn’s performance is such a joy to watch, as he goes from absolutely wonderful to laughably bad-sometimes in the same scene-with such a hilarious panache, it makes the film so much more watchable. I’m not sure I can call it good or bad, but something in a world of its own, where Vaughn just wanders around and does his own thing. I want a spinoff.

Hacksaw Ridge is a fine return for Gibson. It feels like watching a great athlete return after a crippling injury-it’s gonna be rough for the first game, and there’s going to be a couple of missteps, but it’s so nice to have them back in the game, because they’re so impressive to watch. Gibson may have said and done some terrible things, but he has made a fairly enjoyable film, and his sheer talent, talent at storytelling, and Doss’ miraculous tale overcome a horrendous script and a small series of missteps.