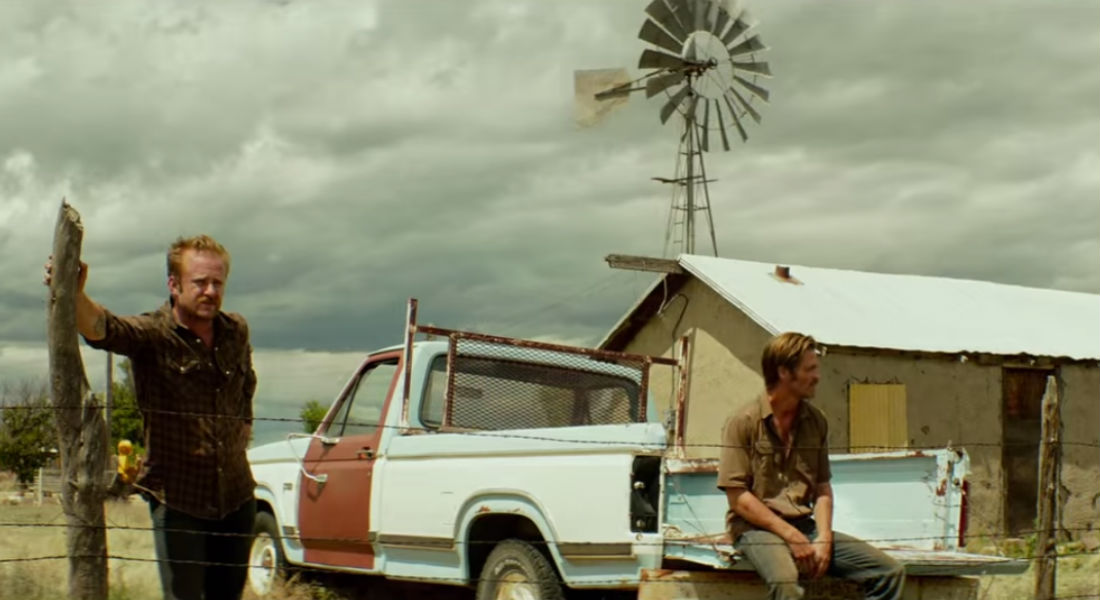 The Western is alive and well in the first truly great film of the summer, Hell or High Water. Directed with panache by David Mackenzie (fresh off the well-made, if problematic, Starred Up), and written with intensity by Taylor Sheridan (who, after last year’s Sicario, is establishing himself as one of the best writers in the business), the film is an excellent blend of great writing, directing, acting, cinematography and timeliness to create an early Coen-esque modern Western that speaks to this era as much as its ancestors spoke to their generation.

The film follows the Howard brothers, who have recently fallen on hard times. Older brother Toby (Chris Pine), is recently divorced, and has fallen so far behind on his child support payments he doesn’t get many opportunities to see his sons. Meanwhile, younger brother Tanner (Ben Foster) has only just been released from prison, with a record a mile long and an uncontrollable id. Their mother has just died, and she has taken out so many loans from the corrupt bankers that the family is in risk of losing their farm. Realizing that they have little to no options left, and seeing the way the banks have destroyed their poor Texas community, the Howards devise a plan: they’ll rob all the Texas Midland Banks in the area, and then pay the bank back with their own money, laundered through gambling. The plan plays out with few complications, but hot on their tail is a grumbling, drawling Texas Ranger two weeks from retirement (aren’t they all?) played by Jeff Bridges, with his reluctant but intelligent partner (Gil Birmingham) in tow.

The bank robber genre has been around since the 1930s. The reason its popularity spikes is simple: a hatred of the banks. There’s something refreshing about the phrase “We’re not here for your money, just the bank’s” in times when the powers that be are set out to beat down the common man. Their popularity was at their zenith during the 30s, when the banks and the government worked together in carelessness to destroy everything and launch the Great Depression. In an era where the banks and the police were the thieves, the thieves became Robin Hood-like figures to the general population. The feeling rose again in the 1960s, when the young felt screwed by the establishment. That was when we got films like The Italian Job, The Thomas Crowne Affair, Breathless, and especially Bonnie and Clyde, which showed strapping young men and gorgeous women fighting the system the only way they knew how. And in recent days, as we watch the banks take down our economy yet again, we get to see new takes on the genre, including Public Enemies and a new twist on the genre in The Big Short (yes, this does qualify as a bank robber film, just in a more lax way). This film is no different. It knows that the banks are corrupt, and while that has a minimal to moderate effect on the suburbs or the major cities, in rural areas like the plains of Texas, it could be make-or-break. This is the world that the Howards inhabit, and it is what helps the audience put themselves on their side. It doesn’t make them out to be heroes (well, maybe Toby), but it also doesn’t make them out to be villains. They are men doing what they have to in a system stacked against them, and if you’ve ever felt the world is out to get you, it’s easy to root for them. Hell, even the Rangers seem to be on their side-Gil Birmingham’s Marshall Parker gives a great speech where he reflects on the fact that they may, in fact, be supporting the villains. It’s not a white hat-black hat dynamic like most Westerns-it’s a story of heroes and antiheroes, with the villains watching their twisted game play out, like a modern day Butch Cassidy and the Sundance Kid.

The film doesn’t work without the performances, and this film is chockfull of great ones. Ranging from the minor roles filled by Dale Dickey, Katy Mixon and especially a one-scene tour-de-force by Margaret Bowman-which is so realistic I’m not sure it was written at all, and they just let the camera roll during a lunch break-to the lead performances. I’ve mentioned Birmingham a few times, and his performance is certainly strong, but it is the three main stars that give best-of-their-career showcases. Bridges is absolutely magical in the role, letting his age shine through and slurring his words with a distinct and realistic Southern Drawl. Pine, meanwhile, continues a hot streak of great roles, including Z for Zachariah and Into the Woods, bringing an innocence to the role that helps to justify the actions of the robbers, and it may be his best performance yet. However, to the surprise of no one who follows his work, the best performance in the film comes from Ben Foster. Foster has been giving amazing performances for years, including Hostage, The Messenger, Rampart, Ain’t Them Bodies Saints, Lone Survivor, The Program and especially his performance in 3:10 to Yuma, which may go down as one of the biggest Oscar snubs of all time. He always finds a way to outdo himself, and this role is no different. Foster’s Tanner is what happens if you point your id towards a good cause: filled with good intentions, but reckless, dangerous, and acting on his death wish. He loves his family, and will do anything for his brother, but that won’t stop him from his borderline crazy ways. It’s one of those roles that, if not handled absolutely perfectly, will come across clichéd and one-dimensional. Luckily, Foster never does anything less than perfect.

Meanwhile, Mackenzie runs this ship as smoothly as possible. The editing is fast-paced and sharp; the cinematography is lush and unforgiving; and each frame is like a painting, giving oodles and oodles of symbolism to the viewers. My only nitpick is that some of that symbolism is extraneous, as the film has a nasty habit of mistaking “subtext” for “things said verbatim in the dialogue.” Yet this is something that I’m willing to forgive if everything else is so well done, and that’s the case with Hell or High Water. It’s a thriller in the vein of Blood Simple and No Country For Old Men, with enough heart and commentary to make for solid dinnertime conversation. And it’s a breath of fresh air after a summer this tedious and unoriginal.