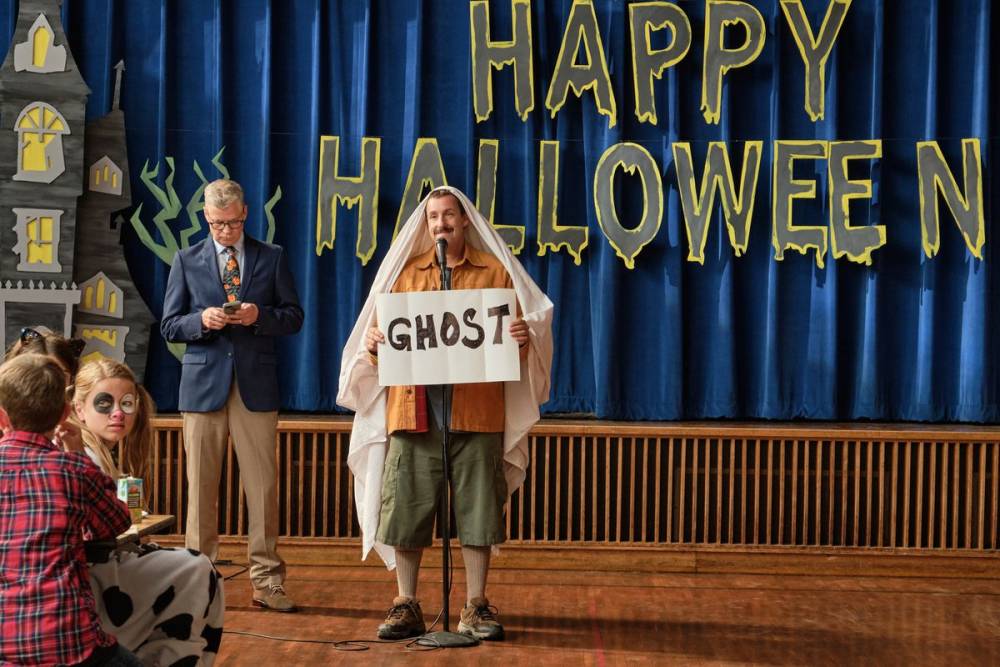 I was about 95% right in my predictions going into Hubie Halloween, the newest Adam Sandler joint on Netflix. I knew he would talk in a stupid voice for the duration of the film. I knew that fart jokes and scat jokes would make up the bulk of the material. And I knew that a series of celebrity cameos would pad the edges to give the appearance of a group of friends having fun, as opposed to a blatant cash grab. But what I didn’t expect was that this, right here – a silly Halloween fable starring your favorite celebrities and a sweet moral – would be the perfect vehicle for Sandler’s filmmaking: as a one-off Halloween special for the whole family.

Ever since he was a child, Hubert “Hubie” Dubois (Sandler) has been obsessed with Halloween. And because of this obsession, he spends every year trying to protect his neighbors from spooky antics. This self-appointed task, along with a tendency to overreact whenever scared and his general oddness, has left him a social pariah in his hometown of Salem, Massachusetts. Bullied by everyone in town, from children to the local priest, Hubie has only four real friends: his childhood crush Violet Valentine (Julie Bowen), his mother (June Squibb), the local radio DJ Aurora, and his trusty “Swiss Army Thermos.” However, this Halloween, things begin to take a turn for the weird. Violent psychopath Richie Hartman has escaped the mental institution upstate. Hubie’s new neighbor Walter Lambert (Steve Buscemi) appears to be hundreds of years old and have a fear of the full moon. And people around town keep going missing at the hands of a masked stalker. With police chief Sgt. Steve Downey (Kevin James) already pulled thin and the rest of the neighbors skeptical of his claims, it is up to Hubie to step up and save the day.

Sandler’s films of the past two decades have been…how shall I say this…kind of bad? On average, his films have resembled The Ridiculous Six and Little Nicky. The best case scenario has been generic genialities like Just Go With It and Murder Mystery. As the formulaic drek wears on, eventually we must ask ourselves, “Are we just too old for this schtick? Is the Adam Sandler formula just tiring in the form of a 50 year old man?” Hubie Halloween, perhaps accidentally, stumbles upon a different route. You see, while Sandler joints may no longer function as fully-fledged movies, they do function as perfectly adequate Halloween specials. Hear me out now: what if Hubie Halloween is Gen-Z’s Hocus Pocus? The Adam Sandler model of filmmaking is rather simple: take a weirdly sweet story, filled with fart jokes and sex references, and let it play out with some of our favorite comedians providing cameos – oh, and Sandler will most likely do a silly voice.

While this formula gets a little boring in the middle of spring with no context, it works in the format of a holiday special. It has that sense of childish glee that lets families sit down together and enjoy the surface level bawdiness. They’ll get nostalgic as clear-cut needle drops play, like “The Monster Mash” or “Ghostbusters.” And the cameos are introduced with the same aplomb as a 70s-era Comedy Hour – although we’re now replacing “Ladies and Gentlemen, Conway Twitty” with “Ladies and Gentlemen, Lavell Crawfrd! Steve Buscemi! Tim Meadows!” and so on. There are even a few spooks that are slightly creepy while still maintaining a good-natured sense of fun! And it all wraps up with a good-natured moral about the reason for the season that may, oddly enough, bring a tear to your eye. Is it cheesy and dumb? Sure. But that’s exactly what we want and expect from a holiday special, and by redirecting our expectations, it inadvertently surpasses them as a result.

As for the humor, the film mostly delivers the types of low-brow humor you’d expect from this type of farce. And yet, because of its setup this time around, the childlike charm is far more successful this time around. I’m not sure if it’s because the filmmakers did anything massively different this time around or if the jokes just work better in this context, but I was far more willing to go with Hubie’s scat jokes than I have been in past instances. After all, there’s something inherently charming about a running joke involving Academy Award nominee June Squibb wearing a series of shirts with increasingly bawdy taglines (the original “Boner Donor” is the least offensive of the bunch). The film also knows how to rely on nostalgia without overdoing it, be it a nod to Happy Gilmoreto the ever-popular “O’Doyle Rules!” And whenever the film is in need of something to pad the plot, it adheres to the age-old rule of “Simple and Silly is better.” I mean, do we need jokes to have depth when naming a character “Hubert Schubert Dubois” does the trick?

Hell, even Sandler’s borderline-offensive accent has a weirdly charming, funny appeal (I promise it grows on you within 30 minutes). And while most of the humor is relatively juvenile, the film does find ways to elevate the stupidity. There’s a terrific Harley Quinn joke that, while Sandler and Gray can’t help but overexplain the joke, still works as a hilarious piece of commentary. And there’s a terrific recurring bit involving townspeople throwing things at Hubie that, while potentially simplistic, elevates in Simpsons-esque ways – by the fifth or sixth repetition, the hurled items escalate from eggs and bags of flaming poop to computer monitors, tubas, and flaming arrows. Oh, and what other Adam Sandler movie can boast a deep pull from the 40s horror classic I Was A Teenage Zombie. What can I say? I’m not made of stone – I can enjoy a philistinish sense of humor if executed perfectly.

Normally, this is the part where I say “Don’t worry about the acting, no one’s trying too hard” – and that’s true. But weirdly enough, some of the actors do give it their all, in their own silly way. After years of lazy performances, it is shocking to see Sandler give the same passion and dedication to Hubert Dubois that he did to Howard Ratner in Uncut Gems. Sandler uses his talents and his charisma to make the weirdly unsettling Hubie a lovable, sympathetic character in ways he probably shouldn’t. I’m also impressed with Julie Bowen, who embraces her freedom from Modern Family by throwing herself hand-over-fist into a woman as crazy and as lovable as Hubie. She makes us feel like she’s desperately in love with this Halloween Man – and that’s no easy feat. Bowen is having the time of her life, and I am here for it.

As for the rest of the cast, everyone’s pretty much on the same page: they’re here to have fun. Maya Rudolph and Tim Meadows are doing their usual thing (and Tim knows how to use his costume to comedic effect), Steve Buscemi’s hamming it up as a werewolf man, and dramatic actors like Ray Liotta, June Squibb, and Michael Chiklis having a ball with silly, dumb material. I enjoyed seeing three of Saturday Nigh Live’s funniest current cast members (Kenan Thompson, Mikey Day, and Melissa Villaseñor) all hamming it up with variations of their usual bits. The younger actors like Noah Schnapp, Paris Berelc, Karan Brar, and even Sandler’s daughters Sadie and Sunny deliver worthwhile and interesting performances without resorting to dumb lines like “I wanna get chocolate wasted.” Cameos like Ben Stiller reprising an iconic role land perfectly, while DJ Aurora and Richie Hartman’s reveals are well worth the payoff. Hell, I even found Kevin James enjoyable for the first time in a decade. That’s the magic of a holiday special: when everyone’s having low-key fun, it’s so much better than the sadness of trying to elevate terrible material.

Look, I’m not going to lie to you and claim Hubie Halloween is high art. I’m not sure it technically qualifies as art. It’s the exact sort of nonsensical gobbledygook you’ve come to expect from an Adam Sandler picture. But it’s good, clean, dumb fun in a time when such emotions are sorely needed. I can’t explain why exactly I liked it. Maybe the widening chasm of cinema has made each production feel special to me. Or maybe (and most likely), the extended period of hopelessness, chaos, and horror in the current national landscape has made me appreciate an idiot making fart jokes a bit more. All I know is that I know two things: Hubie Halloween is a dumb, dumb film, and I appreciated how, like its main character, it wore its heart on its sleeve.