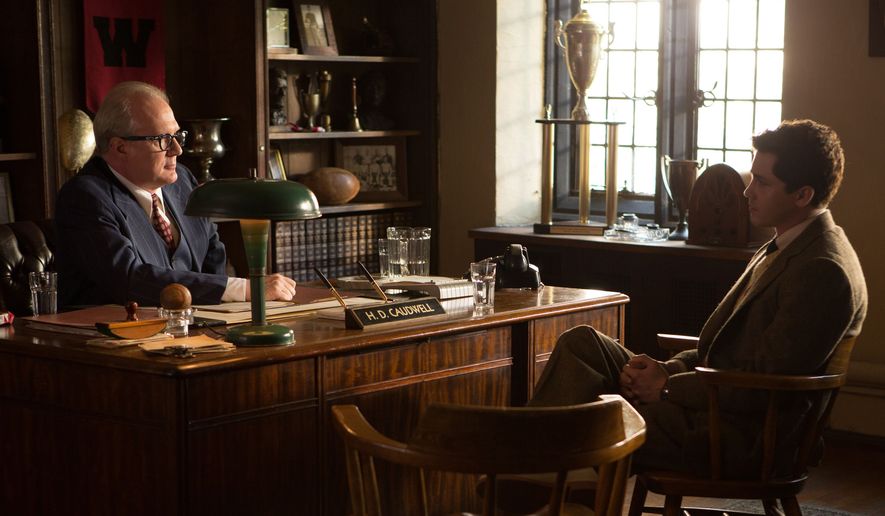 Some authors just work better on page than on screen. For every Room or Gone With The Wind, there’s The Road or The Reader. I get the feeling that this is the case with Phillip Roth, who has a very stylistic prose that just doesn’t correlate to the screen without some serious rewrites. I’d only just begun reading Indignation when I had to see/review it, but it is the perfect example of something working on paper, but not on the screen. Sure, there are some killer performances by Logan Lerman, Danny Burstein, Sarah Gadon and especially Tracy Letts, but the film ends up beating you over the head with its symbolism instead of letting it unfold in a natural way.

The film starts in 1951. Logan Lerman plays Marcus Messner, a young Jewish boy who has just graduated as top of his class, star athlete, and brilliant debater (from what I gather, every Rothian protagonist is a form of wishful thinking on the author’s part-a young Jewish man making his way through life and is also some form of Übermensch). He is preparing to leave his hometown of Newark, New Jersey, in order to pursue higher education at a small liberal arts college in Ohio named Winesburg University-partially to further his quest to be a great lawyer, partially to avoid being drafted in the newly started Korean War, and mostly to escape his overbearing father (Danny Burstein, in a small but brilliant turn), who has begun to panic as he realizes that the dangers of the world around them (both in war and at home) could take the life of his precious child. Once arriving on campus, Marcus encounters a whole new world, introduced to him by the elegant but troubled Olivia Hutton (Sarah Gadon), who introduces him to sexuality, and the staunchly conservative and highly religious dean, Hawes D. Caudwell (Tracy Letts), who requires Christian services for every student, including those who are Jewish or atheist-or in Marcus’ case, both. All the while, Marcus’ narration informs us that the actions and choices made throughout will eventually lead to tragedy.

A major issue with this film is how faithful it stays to the book. Writer/director James Schamus has a clear affinity for Roth’s words, so much so he refuses to change anything, even if it would make for a stronger film. For example, in slightly spoiler-ish territory, the film is narrated by a recently-deceased Marcus looking back on his time in college. This is one of the most cliché, insufferable techniques in the business, and while it kind of works on paper (but not really), it really doesn’t work on film. We are then treated to Marcus’ overbearing, metaphysical takes on his own life. That’s all well and good, but after a while, a brainy, emotionless character goes from endearing to infuriating (I’ll nickname this trait “The Sheldon Effect,” after the Big Bang Theory character who embodies it through and through). Allow me to explain: every frame of a film serves as a symbol for the overall themes. Every action serves greater meaning in the march towards the goal. In a key scene where Olivia provides Marcus his first sexual experience, there’s a massive amount of characterization and symbolism on display that cannot be missed by the audience. And the film decides that this is the perfect time for a Marcus Monologue. Yes, we are treated, in voiceover, to Marcus explaining what this act of sexual gratification means. I don’t mean in terms of their relationship; no, I mean that Marcus literally explains the symbolism to the audience. While he’s supposed to be in the midst of ecstasy. Come on, Schamus. Sometimes fellatio is just fellatio, sometimes it isn’t, but either way, it doesn’t help the film to have you explain it to us.

Furthermore, if there’s one thing I’ve learned from the 30 pages I’ve read of Roth’s works, it’s this: for all his talent, Roth cannot write realistic sounding dialogue to save his life. And sure, on paper it can be defended as the reminiscing of the obnoxious Marcus, but on film it’s playing out in real time, leaving no defense for why the dialogue sounds this trite and this pedantic. It never sounds right-not in the emotional beats, not in the dramatic beats, and certainly not in the comedic beats.

The only reason this film is remotely interesting is how great the actors are in their roles. Lerman does just about as well as he can considering one of his earliest scenes shows him reading Stoic Philosophy as Rational and Cognitive Psychotherapy (*sigh*). It’s an unforgiving role, but Lerman finds empathy and pathos where there otherwise is none. Gadon, meanwhile, is the film’s heart and soul. Her Olivia is the epitome of the “show, don’t tell” style, as each facial expression and motion shows the fragile, depressed girl inside the stylish and sexual woman on the surface. It’s a star making turn, and I hope that Hollywood takes note. In an interesting side note, the Messner parents are played by Burstein and Linda Emond, who are both major Broadway stars, and in fact played lovers in the most recent Broadway production of Cabaret. Burstein shows his talent here in an otherwise over-the-top and obnoxious role, finding understanding in what, in lesser hands, would be a one-note character. Hell, his best scene is a dream sequence that is otherwise the dumbest moment of a film all year, where he looks tragically into the camera, and we can see this man’s entire soul. The fact he can do that in the middle of such a terrible scene is a testament to his talent. Emond, meanwhile, has even less to work with, yet still holds her own. She’s nothing to write home about, but nothing disappointing either. And I do want to give a quick shout out to Ben Rosenfield, whose minor role as Marcus’ roommate is the perfect example of how to make something out of nothing.

However, if this film belongs to anyone, it’s Tracy Letts. Yet another Broadway find (Letts is both a Tony-winning actor and Pulitzer Prize-winning writer), Letts makes the dean an infuriating symbol of the system. He only has two real scenes, both of which are showdowns with the opinionated Marcus, and both are the moments where the film truly shines, particularly the first, a sixteen-minute tour-de-force by two brilliant minds. These are the moments where the dialogue works, for while it is still over-the-top and overly sophisticated, it works here as a window into the two men’s minds.

However, Letts is so good, it also points out the film’s biggest flaw: the message. The film is supposed to serve as an allegory for the effects of the system bearing down on one intelligent young man: he is constantly being told what to do, what to think, and who he is, by his religion, by his parents, and by his dean. His inability to successfully stand up to the rigid world around him is what eventually brings about destruction for not only himself, but also the only person to truly love and understand him, Olivia. It’s a well-told tragedy on paper, but director Schamus alternates between ignoring this message completely or literally spelling it out for you. It’s almost as if he forgets the audience for extended periods of time, and when he is reminded, he thinks of us as infants who need help understanding basic themes. So whenever we see someone like Letts using a trait known as “subtlety,” it makes the rest of the film seem as blunt as a baseball bat to an uncovered head.

Overall, it’s difficult to recommend this film. I’m going to give it a decent grade, only because the cast is so outstanding. The verbal sparring between Lerman and Letts should be taught in both film and law schools throughout the country. And as someone who went to an Ohio liberal arts college, the film really does capture the feel of those campuses. However, with this bland a script and this weak of direction, it just makes for a disjointed, average film, a real tragedy in the face of the greatness it strove for.