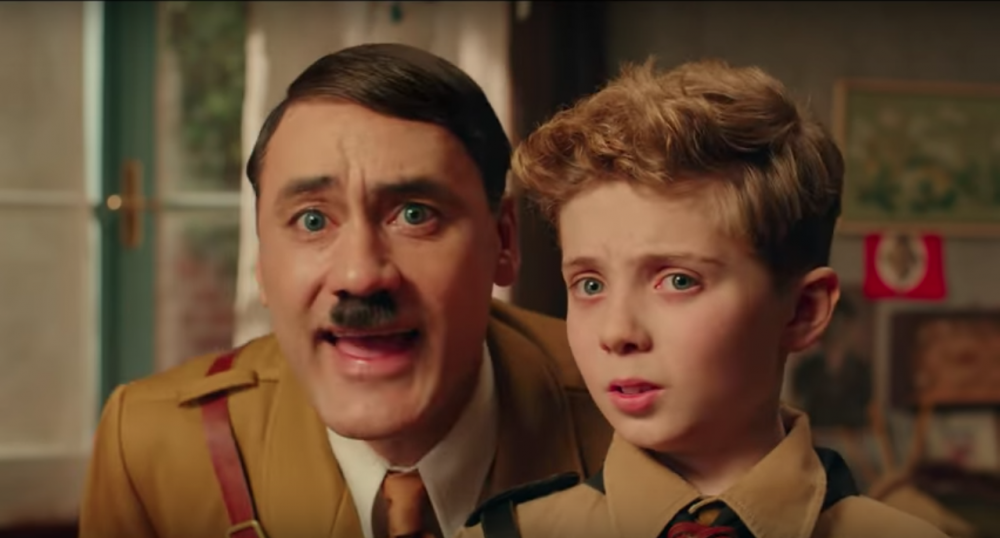 It’s no secret around these parts that one of my most anticipated films for the fall season is Taika Waititi’s Jojo Rabbit. Waititi has been on a roll in recent years, thanks to What We Do In The Shadows, Hunt for the Wilderpeople, and Thor: Ragnarok. And with Jojo Rabbit, Waititi looks to take a definitive stance against hatred and bigotry with his coming-of-age satire in which a young boy in 1940s Germany learns about acceptance and love with his imaginary friend, a fake Adolf Hitler. And shortly after the first incredible trailer dropped in July, we now have a second trailer – one that works even better in proof of concept than the first.

Jojo Betzler (Roman Griffin Davis) is a shy, lonely boy living in Germany in the 1940s. Picked on for being a “scared rabbit” by his Nazi Youth compatriots, Jojo’s only friends are his single mother Rosie (Scarlett Johansson) and his imaginary friend, a friendly sprite based on the greatest, nicest man Jojo has ever seen: Adolf Hitler (Waititi). However, as the cost of the war begins to take its toll on Jojo’s hometown, and he discovers that his mother is hiding one of those “vile Jews” in the attic, a young girl named Elsa (Thomasin McKenzie), Jojo must confront his blind nationalism and learn that maybe, just maybe, Hitler and Nazism may not be all they’re cracked up to be.

I’ll be honest: as much as I love the original trailer for this film, and the hilarity of the eventual Hitler reveal, this is a much better trailer for Jojo. The first trailer was a confusing, silly hodgepodge that, if you weren’t aware of the film’s overall message, may seem tone deaf. Here, we get a much stronger view of what Waititi’s going for, and the ways in which he’s getting there. We get better insight into the imaginary friend relationship (including the hardest joke I’ve laughed to in ages, when Hitler’s plan for dealing with trouble is “burn down the house and blame Winston Churchill!”). We learn more about the brainwashing, as we see Jojo sharing rumors he’s heard about Jewish people before meeting one and discovering his mother’s views and heart. We get to see the performances on display, from the silly (Sam Rockwell and Stephen Merchant make excellent Nazis) to the poignant (Johansson looks great, and McKenzie is perhaps our greatest young actress). And the musical cues are all popular pop songs performed in German, based on Waititi’s theory that Hitler would have been a pop star to a young boy in the 1940s – a decision that works brilliantly here. I’m all in on this film. Jojo Rabbit will be released on October 18th, although we’ll have news on its quality this Sunday out of TIFF. You can watch the new trailer below, and for good measure, I’m including the viral marketing they did, spoofing the infamous Downfall Hitler meme.