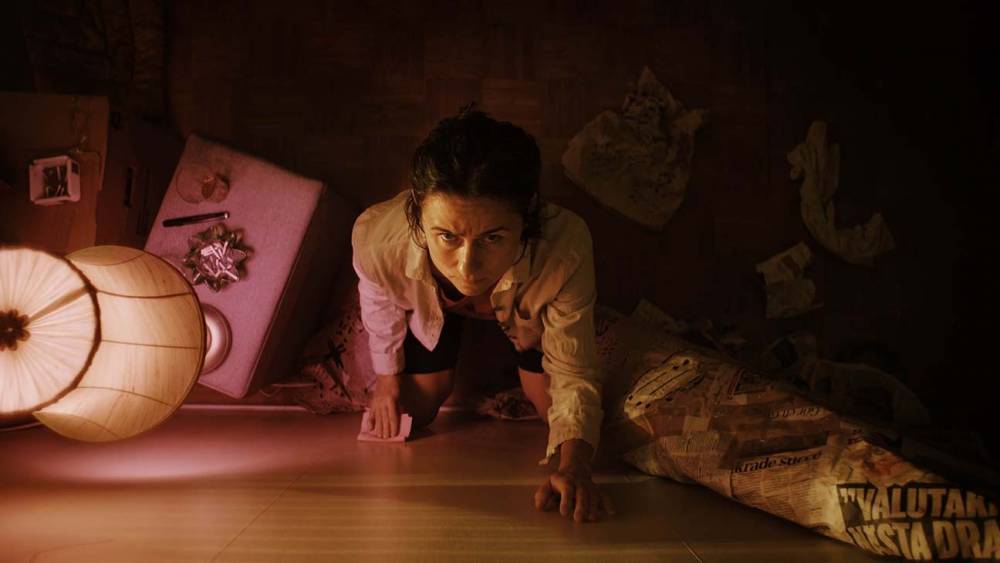 It hurts when you watch a movie with so much potential and talent whiff on what could and should be an easy home run. And yet, like “Casey At The Bat” himself, thus is the case with Knocking, Frida Kempff’s recent entry in the horror canon. Despite riffing on well-worn, yet always marketable territory (woman living alone starts to hear things go bump in the night), Knocking fails to reach the same level of success as, say, The Invisible Man and Gaslight. It’s a missed opportunity that, at 78 minutes in length, somehow feels too long.

Molly (Cecilia Milocco) has just been released from a psychiatric ward after suffering a nervous breakdown. She’s allowed to move into a single apartment, albeit with constant supervision and visits to monitor her progress. She struggles with adjusting, but is slowly easing her way back into the civilized world. That is, until she hears a mysterious knocking sound in the walls of her apartment. The knocking seems to come without rhyme or reason, at random hours, occasionally accompanied by a woman crying, and no matter how loud it is, her neighbors supposedly can’t hear anything. And so Molly must ask herself: is the knocking the sound of a person in peril? Or is she suffering yet another breakdown?

You’ll realize exactly why Knocking doesn’t work somewhere around the five-minute mark. It is at this point that you realize that you’ll be able to guess, with frighteningly decent accuracy, exactly what is going to happen for the next 78 minutes. Once things start going wrong and the neighbors begin speaking in creepily cultlike innuendos, you’ll realize that you’ve seen this movie before. Only that time, it was called Gaslight, or Rosemary’s Baby, or The Invisible Man, or The Woman In the Window, or Midsommar, or…you know what? The list goes on and on.

The film is a metaphor for women who are told they’re crazy for mistrusting others, or sensing something is wrong, or what have you, and while this territory seems, in theory, like an endless minefield, it helps if you ultimately have something to say. The film stacks obvious metaphor over obvious metaphor (“We’re trying to help you!” shout the mistrusting male neighbors that surround her), and while there are a few clever touches – like the fact that she’s the only female in the building with lines of dialogue, as every other woman she encounters let (or are forced to let) their husbands speak for them. It all leads up to an ending that’s supposed to mean…something, but considering the countless of conclusions you’ve already imagined, this one will seem so anticlimactic you won’t even bother exploring it for themes.

Perhaps it would help the film’s obvious story beats if Kempff did something, anything, to spice up the story. But for the most part, she seems content with the run-of-the-mill plot points and “emotional” beats. It is abundantly clear that she made her name in the documentary field, because the film is mostly a cold, straightforward reporting of facts. The big emotional gimmick employed is a flashback, which always follows a shot of Molly looking sad. The flashbacks aren’t very mysterious or detailed; you can figure out within the first thirty seconds that her ex-girlfriend drowned and she failed to save her, thus sparking her desire to save this new mystery person.

And yet, if the flashback is so obvious, why does Kempff repeat the same flashback approximately thirty times during the runtime? It’s actually amazing: this is a 78-minute film, and at least 18 minutes of that is the same flashback, repeated ad nauseam. When coupled with “jump scares” that don’t live up to the reveal and a moody score so overbearing you feel as though the composer is breaking their baton over your head, and the entire experience ultimately feels like an experiment in tedium, rather than a thrill ride.

That being said, Kempff does show a decent amount of success behind the camera, whenever she’s stripped of her narrative gimmicks and thinly veiled metaphors. The performance that Kempff coaxes out of Milocco is impressive enough – not the greatest horror performance I’ve seen all year, but certainly presentable. There’s a solid, melancholy sequence where Molly downs her antidepressants to the on-the-nose but brilliantly utilized strings of “You Don’t Own Me.” Once the knocking noises are introduced, Kempff has some fun with the futility of solving the mystery – a good chunk of the film’s runtime is dedicated to Molly’s trial-and-error attempts to figure out the meaning behind the knocks, like Morse Code and geographically locating the sound’s origin, only to fail each and every time.

I like the fact that there’s a creepy house across the street from Molly that may or may not show the future, as she watches a similarly dressed woman jump to her death (only for the body to then magically disappear, without explanation). Oh, and at one point Kempff creates a feeling of confusion and paranoia via that awesome second-person camera shot from The Hangover, although it’s then repeated two or three more times, cheapening its impact. There are some clever directorial choices on display here; it’s just unfortunate that they feel schizophrenic when compared to the rest of the film’s narrative.

Knocking is a massive disappointment, in almost every sense of the word. There’s a good story here, and maybe even a good film. If you cut out the endless repetition, flesh out the characters and scenarios, and perhaps add a dash more weirdness and surrealism, you could potentially have a knockout thriller. But as is, I just couldn’t get onboard with what Kempff is laying down. I understand I’m in the minority on this one – post-Sundance, the film maintains an 80% approval rating (although I’ve heard some rumblings from fellow critics who didn’t review the film that they agree with me). But I am here to offer up my thoughts and opinions, not theirs. And my ultimate opinion is that this “horror film” was a slog to sit through, lacking enough scares, thrills, or original thought to carry it past the ten-minute mark, let alone 78.

Knocking currently does not have a US release date. It will continue playing the festival circuit for the time being. It will, however, release in Sweden on October 15th