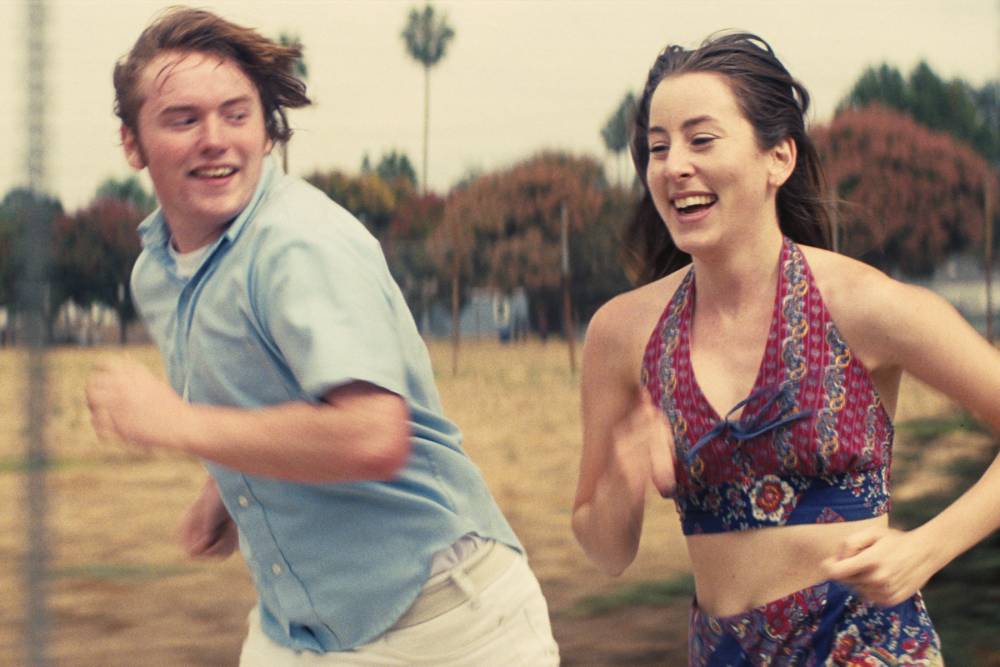 Few directors can place you so firmly in their world like Paul Thomas Anderson. From Hard Eight to Phantom Thread, Anderson has explored life’s messy realities with heart and humor, whether it involves Golden Age porn stars, stoner detectives, fussy fashion designers, or megalomaniac oil barons. Each of his films brings a unique flavor to the party; a thought, an emotion, a feeling. Yet before today, he had never managed to combine all these ideas and talents into one. That all changes with Licorice Pizza, a film with the world-building of Boogie Nights, the incisiveness of There Will Be Blood, and the beating heart of Magnolia. In short, a wonderful roller coaster.

It’s 1973 in San Fernando Valley. At his school picture day, 15-year-old child actor Gary Valentine (Cooper Hoffman) meets photographer’s assistant Alana Kane (Alana Haim). He’s instantly smitten with her; she’s simultaneously repulsed by his advances yet drawn to his earnestness and business acumen. When he takes a job out in New York City, he hires her to be his chaperone. And thus begins a strange and complex friendship for both of them as they try to navigate a world around them coming undone, including several get-rich-quick schemes, a pair of Old Hollywood alcoholics, a psychotic hairdresser, and the mayoral campaign of Joel Wachs (Benny Safdie).

Licorice Pizza works in both its specificity and its universality. It takes place in a time and place that, as its characters describe it, may be the end of the world. This is 1973; the President is embroiled in controversy, the dream of both the conservative 1950s and the progressive 1960s have completely shattered, and the adults have completely lost control of the plot. The country is in a state of arrested development, and without an adult to guide them or teach them, the kids are left to fend for themselves. This is the world that Gary and Alana must come of age in, and thus is the driving force of the film.

The two have an undeniable bond, impossible to describe yet easy to feel. For Gary, a junior huckster who learned how to hustle and work every angle since birth, Alana represents the platonic ideal of life: the unattainable older woman most young men encounter, and the missing piece of his budding monopoly and search for the American Dream. For Alana, Gary represents the way the world should be, and constantly fails to live up to. As an adult, Alana is expected to talk with adults, to hang out with adults, and to form connections with adults. And yet the adults around her are constant reminders of the failures of the world around her: they are drunks, or vapid, or misogynist/racist/etc. The reason she is drawn to Gary is that even in his youthful shortcomings and earnest stupidity, he’s the only one to treat her with respect. And in a world filled with a lack of respect where you have to fend for yourself, that’s a huge deal.

All of this works because of Hoffman and Haim’s performances – both first-time actors in their own right. Hoffman, the son of Anderson’s late longtime collaborator Phillip Seymour Hoffman, is striking in his cinematic debut. His face is somehow simultaneously young and old, perfect for a 15-year-old wise beyond his years. Hoffman has a showmanship to his performance, and the way his face lights up whenever he’s discovered a new angle is just as delightful as his motormouthed schtick. It’s easy to imagine that he’ll grow up to become President – or, worst-case scenario, Jake Gyllenhaal in Nightcrawler. However, Hoffman’s greatest asset is the way he can look at Haim with complete adoration – and it’s easy to see why.

Alana Haim is an unstoppable force as the photographer’s assistant who shares her name; she manages to capture the angst of your mid-twenties with an unbelievable frenzy. Haim seemingly can do it all; you feel her existential dread at being stuck at home with no direction in life. You understand her frustration with the men she encounters, as well as the push-pull relationship she feels with Gary’s flattering but frustrating advances. And yet, you understand why she’s drawn to the kid. Their relationship isn’t romantic in nature, per se, despite Gary’s hopes and dreams, and the two walk that tightrope carefully until a last-minute sequence that admittedly sets off the tone of the entire film. But regardless of said misstep, it’s hard to deny the talents of either performer, how they play their characters, and how they interact together.

To capture this time, place, and tone, Anderson utilizes vibes over a sense of plot. There’s not really a story; just a collection of episodes as the youngsters try to navigate 1970s Encino. Many a director has tried to craft their film as a mosaic as opposed to a narrative; most fail miserably. Anderson has made the best example since Robert Altman. Each adventure is unique and entertaining in its own right, and each feeds into a personal journey, be it Alana’s, Gary’s, or both. The film moves from one comical episode to the next, just as the youthful Gary moves from one get-rich-quick scheme to the next. There’s an encounter with drunken, aging Hollywood stars trying to reclaim their youth through dangerously stupid stunts. There are trips from convention to convention in order to sell their newest gimmick (from acting to water beds to politics to pinball). And in the film’s most iconic sequence, there’s a terrifying encounter with a coked-out Jon Peters (Bradley Cooper), out to wreak havoc and try to murder you or get laid, whichever comes first.

This flowing, weaving narrative works because of Anderson’s deft hand as a filmmaker. His script flows like a fine wine straight from the bottle, never letting up on the jokes or verbal humor. When the film requires a visual gag, Anderson proves why he always has been and always will be the best in the business. The reason an Andersonian sequence works so well is that no matter how silly a scene may be, the underlying dramatic tension is never lost. We know the scenario is funny; for the characters, it is serious, perhaps even traumatizing. Few directors understand the dichotomy of this comedic tension; his mastery of it makes Anderson a modern-day master. All of this is nostalgically framed through Michael Bauman and Anderson’s lush 35 mm lens; it adds a sheen and a hue that most directors would kill to replicate. And thanks to Andy Jurgensen’s loose, loving editing, the film never feels its length; indeed, one could live in this movie for hours more and never grow tired.

The rest of the cast is often marvelous in their own right, although their roles often don’t add up to much more than cameos. Safdie gives perhaps the most lived-in performance outside of the main couple, bringing the famous politician to life in stunning detail. Much of the film features great character actors playing hilariously outlandish figures, real or otherwise. Christine Ebersole, in two minutes of screen time, gives a richer and fuller performance as Lucille Ball than a certain film and actress that shall remain nameless. Skyler Gisondo is absolutely hysterical as Lance, a pompous rival actor whom Alana briefly dates. Broadway legend Harriet Sansom Harris steals the film in a brief cameo as Gary’s agent. And don’t blink, or you’ll miss a fantastic John C. Reilly cameo. The only caveat with the character actors comes in John Michael Higgins, a terrific comic who plays the virulently racist owner of a local Japanese restaurant. The film makes no attempt to hide the hideousness of his racism, even through the lens of satire, yet it’s still a weird heel-turn every time he appears.

And yet, I’d say the best performances in the film are twofold. They come from either complete unknowns or legendary actors doing parodies of major figures. In the case of the former, some of my favorite performances in the film come from George DiCaprio (father of Leo) as a sleazy waterbed salesman who inspires Gary in one of his schemes, as well as Alana’s real-life family. Danielle and Este are mostly just here for the ride, but it is their father Moti, a ridiculously over-the-top man of few words who stands out amongst the bunch.

However, the three best performances come from seasoned veterans, each going distinctively against type (ok, one sort of leans into it). Bradley Cooper goes all-out as the abhorrently filterless, monstrous Jon Peters, and he damn near steals the film. But for my money, the film’s best moments come from Sean Penn and Tom Waits as Not-William Holden and Not-John Huston. The parallels are so obvious all that’s needed is a big red sign saying “This is who they’re based on.” But the duo is so funny, and took such care in crafting the characters, the banter, the jokes, and beyond, that it doesn’t matter. You are mesmerized from the minute they appear to the minute they leave, all too soon. Imagine thinking Sean Penn is giving a great performance in the Year Of Our Lord 2021. It’s downright miraculous.

Licorice Pizza is a magical film, near-perfect in its simplicity and honesty. I could go into further detail on the film’s humor, or the performances, or the emotion at its core. But I don’t think any of that will establish exactly why I think this film is so smart. Instead, I will share this simple anecdote. I took extensive notes during Licorice Pizza, as I do with every movie. And yet, I didn’t open my notebook once. Everything I have written so far comes straight from the heart, and from the soul, which is exactly where this film strikes. This is not a movie of technical merits or accomplishments, even if it does exactly that. It is a film of thoughts, emotions, and wit. And it will burrow into your heart in much the same way.