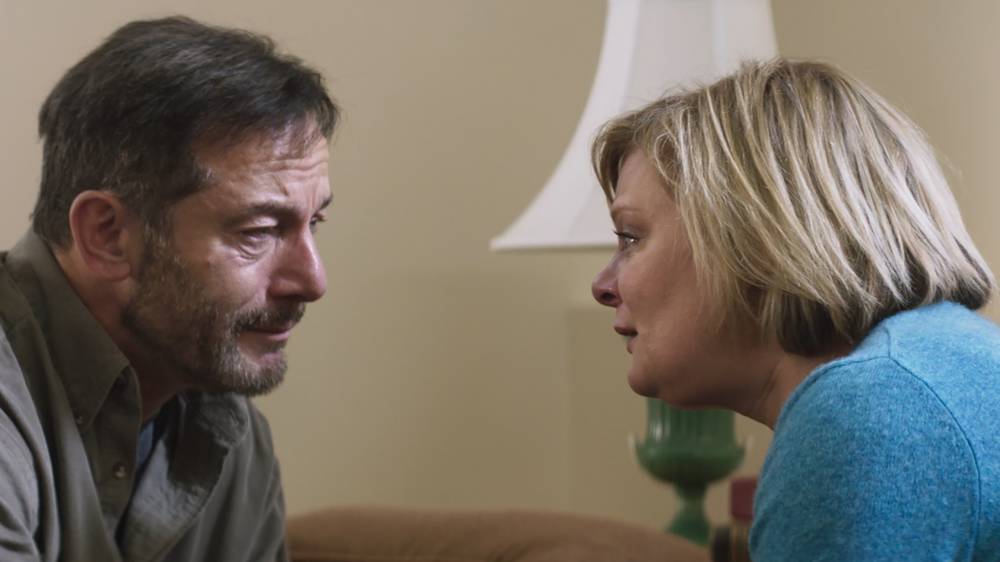 Writer/director Fran Kranz has done his homework when it comes to chamber pieces. His directorial debut Mass is a powerful coming-out party, a weighty text of complicated themes and emotions that offers towering performances while acknowledging the reality that there are no clear-cut answers. Kranz has carefully studied what makes these types of movies work, from pacing to monologues to camerawork, and while there are a few missteps in the film’s 110-minute runtime, Mass is an efficient gut-punch thanks to an understatedly fiery screenplay and no less than three terrific performances.

In a quiet Methodist Church one cold morning, two sets of parents meet in a claustrophobic break room. On one side of the table are Jay (Jason Isaac) and Gail Perry (Martha Plimpton). On the other are Richard (Reed Birney) and Linda (Ann Dowd). While not prevalent to the viewer at first, the reason for this tense gathering soon reveals itself: several years earlier, Richard and Linda’s son Hayden shot up his high school, killing himself and a handful of other students – including Jay and Gail’s son Evan. The point of the meeting is to come to terms, as a group, with their shared trauma, to litigate the meaning of parenthood and the pain that has been felt, and hopefully, idealistically, to find forgiveness. Arguments will be had, tears will be shed, and all four, before the day is out, will run the gamut of emotions.

Mass is my favorite form of debut project: a quiet, smart film that focuses on subtle touches and crafted performances. Each character, approaches with their own agenda, beliefs, and complicated emotions, none of which are revealed to the audience from the start. In fact, Kranz gives us sparingly little information in the film’s opening minutes, forcing the audience to piece together what happened on their own, slowly and deliberately. All we know is that there were lawsuits in the past, aggressive comments and threats were made, and the emotions in the room, as stoic as everyone tries to act, are incredibly high. This pace, and how the information reveals itself – in fights, agreements, digressions, and beyond – all contribute to an overall emotional effect that preys on our brains and our hearts. By the 30-minute mark, there will be a lump in your throat, and it will not go away.

Mass works because it is a messy film. I don’t mean to imply that the filmmaking – which is, for the most part, smart, simple, and sparse. I mean that emotionally, it is a messy film. Kranz uses his script and his direction to explore exactly how complicated and wrenching this conversation – and the debate surrounding it – truly is. Every nuance, complication, horror, heartbreak, and beyond is laid bare, devoid of any concretely political ulterior. In fact, for the most part, the film approaches the subject apolitically, choosing to tackle the subject on a more human level, something often lost in the conversation.

The only outwardly “political” moment involves Isaacs’ Jay, who has become a sort of Parkland dad since the shooting, protesting and lobbying for gun control, which puts him at odds with Birney’s Richard. Yet even this is not meant as a political statement. The film is less interested in Jay’s political beliefs as it is in how he developed them: a Quixotic quest to give his son’s life meaning since, as he sees it, his son’s existence is now meaningless. By avoiding getting truly political, the film ends up presenting the widest, smartest look at mass shootings to date, tackling everything from Internet indoctrination, mental health, and gun violence without ever tipping into the preachy. It is all kept on a human level, and therefore speaks more honestly and compassionately.

Equally messy is the film’s look at love – particularly, the love of parents (and more specifically mothers) for their deceased children. It is easy to empathize with every character present in this film. You don’t have to like them. You don’t have to agree with them. But you can follow their logic, and you can feel their pain. They are all acting out of loss, and trying to deal with the scars that loss left behind, and will likely never fully heal. In that way, Mass takes a detour away from its contemporaries like Who’s Afraid of Virginia Woolf? and God of Carnage. Whereas those films and plays tackle what humanity looks like at its worst, stripped of the façade of the social order, Mass makes the case for humanity at its best. While the characters have strong emotional feelings towards each other, and anger and resentment run deep, they never give into that anger, and mostly emerge out the other side moved by their counterparts’ emotional journey.

In particular, the film studies the emotions and actions of Richard and Linda, who enter the conversation with more complications regarding their loss. Their battle – the one they’ve been fighting for five years before even setting foot inside this church – involves the question “How do you love someone who has done monstrous things?” It’s a much more emotionally taxing question than even Jay and Gail’s, which forces them to ask “How do you blame someone you know, deep down, cannot be blamed?” Richard and Linda spend the film grappling with their complex feelings towards their son, a boy they loved and raised despite his mental struggles, and who then went out and committed an unspeakable act of evil.

It’s a question that weighs hard on Richard, who it is implied had complex feelings towards the boy, whose birth was unplanned. But it weighs harder on Linda, the woman who birthed the boy, nurtured, him, and comforted him, and who wants to mourn for a young man who will never receive sympathy. She is well aware of her own faults – when asked by Gail how she could believe such obvious lies from her son, she simply replies, “Because I wanted to.” And when she laments, late in the film, “I didn’t do things so different than other parents. How did mine turn out so differently?” it lands with a visceral, emotional punch right to the gut. Kranz’s screenplay is as messy and as complicated as the conversation it tackles, and it makes for a more interesting film because of it.

As for the acting, it should come as no surprise that this film is a tour-de-force. All four actors make deliberate choices, carefully calculated and imbued with significant import. It’s quite likely that the greatest work in the piece comes from Plimpton, who comes out firing on all cylinders from her first moment onscreen. In fact, the very first shot of her, sitting in her car waiting for the meeting to begin, is an incredible feat of facial acting. Plimpton laces each line with anger and pain, trying her best to maintain a stoicism that is slowly chipped away until a final, impeccable, heart-wrenching outburst. Meanwhile, Isaacs’ grief is…considerably less restrained. Isaacs gets the film’s more juicy monologues, utilizing biting and sardonic humor to express his grief, and creating one of the film’s smarter, most believable characters. His logic and his composure make his later teary-eyed blow-ups all the more poignant because of it. He acts with his entire body, and it shows in each and every scene.

Of course, when it comes to character actors coming in and blowing the room away, we should obviously talk about Ann Dowd, who enters the film Ann Dowding in all the right ways. Dowd’s role is perhaps the most complicated in the film – a kindhearted, warmhearted woman whose goodness makes her harder to blame (much to Plimpton’s chagrin), and yet who cannot help but love her son despite his heinous acts. Dowd chews her way through a series of juicy, emotional monologues, each better than the one before, as if they were merely hors d’oeuvres on the way to the main course. I dare you not to weep when she utters the phrase, with every syllable perfectly uttered, “The world would have been better off without him. But I can’t say I would have.”

The only member of the four whose performance remains a bit cold – and it’s perhaps not his fault – is Birney’s. Birney plays the least flashy, most difficult role of the bunch, a character brimming with resentment and insufferability who spends the film trying to maintain a sense of normalcy and image in the face of any emotional breakthrough. It’s a smug and cavalier attitude that begs the question (which is inevitably asked), “Where’s your regret?” The lack of showiness, when compared to his compatriots, makes his role all the harder, and while it certainly left me the coldest of the quartet, it’s hard to argue that he achieved his intent.

All of these themes and performances are brought together underneath Kranz’s careful eye as a director. It’s fairly surprising that this is his first film – everything about it implies a more seasoned pro. Every camera movement is carefully plotted, warm, and smart. Kranz utilizes his church setting to its fullest, using windows, lights, and beyond to imply the forgiveness and healing occurring within its holy walls. Of course, Kranz does tend to go a bit overboard with his directorial flourishes. For example, the film opens with an extended sequence of uninteresting side characters preparing the room for the upcoming mediation. It’s a bit unnecessary, especially because the film’s first few minutes imply a superior sequence of events involving silent stage setting scored by a rehearsing church choir. And there are a series of random cuts to a waving piece of fabric on the side of the highway. What does it mean? Is it an act of sympathy for a potentially dead teenager who died in an accident? Is it a memorial for the shooting? Who knows. The film never explains it or its significance, it has nothing to do with the story, and it is never addressed outside of these few random asides. It almost feels as though Kranz was interested in Doing An Art, which instead inexplicably cuts away from the tension in the room and undercuts his forward momentum. It’s a mostly well-directed film. I just wish that he’d remembered that less is more.

Mass is a film that is unpretentious in its brilliance. It doesn’t pretend to have all the answers. It knows that these are complicated issues unlikely to be solved in our lifetime. But what Mass does possess is an unparalleled heart, brought to life by its script and performers. Like its characters, the film is a reminder of the power of empathy, of the human element present inside these unbelievable tragedies. Is it a little long in the tooth in that regard? Sure. But Mass is a reminder for us to feel, and to forgive, and for that very reason, it will remain a towering achievement in its subgenre for years to come.

Mass will have a limited release starting tomorrow, October 8th, exclusively in theaters