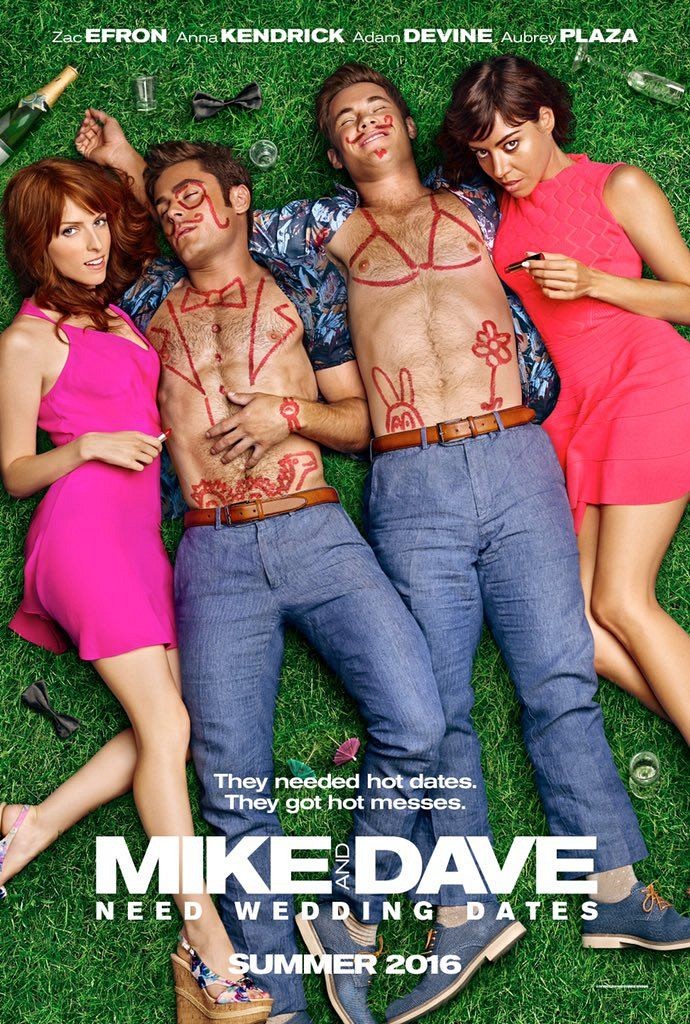 It’s really hard to review a movie like this. Do I reward great performances if they are essentially roles we’ve already seen? Do I knock it for using cliché scenarios despite the fact they try to put their own spin on them? Maybe the job would be easier if someone told me who the protagonist is, because I can’t tell if this is the Stangle Brothers’ story, as the title implies, or the story of Tatiana and Alice, because the film jumps between them all too much to get a strong handle on whose story it is. I’ll certainly say this: while the script is a jumbled mess of been-there, done-that, the film is anchored by four strong performances by Adam Devine, Zac Efron, Aubrey Plaza and Anna Kendrick, as well as supporting roles and cameos from Stephen Root, Sam Richardson, Alice Wetterlund (doing an inexplicable Kate McKinnon impression) and especially Kumail Nanjiani, who give it their all to salvage what could be a fairly entertaining film.

Based very loosely on a true story, Mike and Dave Stangle (Adam Devine and Zac Efron) run a business selling alcohol to bars. They aren’t very good at it-they aren’t really good at most things-but they get by on charisma. Never needing anyone but each other, they are notorious for their shenanigans at family gatherings, which often end in disaster. As their sister’s wedding is coming up, the family holds an intervention, informing them they can only attend if they find respectable girls to accompany them as dates to prevent mischief. They choose to create a Craigslist ad that goes viral and gains them notoriety all over the world (this actually happened, for the record. The rest is fiction. Especially either of them being as attractive as Devine or Efron). After going on television, they are spotted by complete disasters Tatiana and Alice (Aubrey Plaza and Anna Kendrick), who are looking to escape from their woes. The girls decide to pretend to be “respectable” in order to earn a free trip to the wedding’s destination in Hawaii. Traditional raunchy wedding rom-com story beats ensue.

The strange thing is, this film could have been great if it hadn’t bent to the will of the romantic comedy, as much as the teen girl verbally sighing longingly next to me would disagree. The film’s best moments come when it is exploring rarely utilized relationships, such as brothers or female friends. Allow me to explain. There is a definite lack of fraternal relationship in films. I’m not talking about a fraternity, or two men who have been friends since birth. I’m talking about what Tom Cruise and Dustin Hoffman had in Rain Man, which may be the only true “brotherly” film that exists. On television, you have Frasier and Everybody Loves Raymond, but that’s about it. But Mike and Dave gives us one of the most honest portrayals of siblings yet. Their jokes amongst each other are terrible and often based on a poor taste in pop culture, they bicker and argue, but through all of this, there’s a level of love. Devine and Efron nail each and every aspect listed, and then some. Hell, their chemistry is better with each other than it is with any given pairing of the females they play opposite. They aren’t really that funny, but they aren’t supposed to be funny. The only person who should be laughing is your sibling.

And the script explores these themes even further. You know how you look back fondly on family events like weddings, parties and holidays when you and your sibling got into different shenanigans? In reality, those events were terrible, they were boring, and the only two people having fun-you and your sibling-were being so obnoxious and probably drunk that everyone there hated you. Mike and Dave takes this concept and portrays it literally, and to amusing effect. The opening credits portray a montage from the brothers’ point of view, showing a menagerie of debauchery that the audience gazes upon with a hint of jealousy. Until, of course, the family shows videotapes of them maiming or harming their fellow party guests. It’s a set-up you’ve seen a thousand times, yet it feels fresh because it’s more interested in what it represents rather than what actually is. This same rule plays with the idea of living in your brother’s shadow. The normal way to go about this plotline is the younger brother can’t escape the shadow of the older brother, who is viewed as perfect. Mike and Dave first flips this formula on its head by having Mike live in the shadow of younger brother Dave. But the movie doesn’t want to stop there. Oh, no. Not only is Dave constantly praised for his artistry, musical abilities and just all-around Zefron-ness, but Mike is constantly put down. Hard. To quote Tatiana (delivered gleefully by Plaza), “He looks like a hot guy who stared into a f*cked up funhouse mirror, but in reality, that’s just how he regularly looks.” And that’s the nicest thing said to Mike the entire movie! The film isn’t really interested in the literal interpretation of brotherhood as it is taking ideas to the extreme in order to understand the psychological effects of brotherhood.

The same general concepts apply to female friendship. You have seen female friends thousands of times, but normally one is the responsible/uptight friend while the other is a hot mess. But in reality, no one is really put-together in their twenties. This is an idea that is explored with nuance in Bridesmaids-a bunch of females end up realizing that they are all a little messed up and their only chance is to rely on one another-yet Mike and Dave is not interested in nuance. It wants to play in the sandbox it’s built and ignore the rules. So Tatiana and Alice are taken to their extremes. Tatiana seems like the smart one when compared to Kendrick’s Alice (who is played with such an earnest stupidity she may be the true heir to Steve Carell’s Brick Tambland. She’s that good), but when her ideas are actually put to the test, they are taken to the extreme. Tatiana is capable of determining Alice’s need for a vacation to lift her spirits, so they should create fake personalities and hit on strangers. Mike and Dave need to feel confident and superior upon meeting them, so I need to lower myself by throwing myself in front of this car. My best friend needs a pick-me-up, so I’m going to earn her tickets to Rihanna by fingering this lesbian. When you’re young and reckless, these ideas seem intelligent, but in reality, you’re just young and stupid. And that’s ok, just so long as you hone that energy. Kendrick, meanwhile, portrays the idea of numbing yourself to the harm of heartbreak. However, Alice’s extreme is numbing herself to everything-to love, to alcohol, and to logical thought. In reality, no one really ends up that dumb after being heartbroken. But that’s what if feels like when it happens. It is in these moments that the film really shines.

But then the movie reverts back to its default position, and everything it has worked to build falls apart. The comedy, especially, is really strange. I can’t tell if it’s the improvisations ruining this movie or if it’s the original script. If you look at a Judd Apatow comedy, you can easily notice a lack of control over the actors that ends up diluting the product. However, you honestly can’t tell in Mike and Dave if the best lines are improvised or scripted. The general dialogue is so bland I have to assume it’s the rare case where the improv is superior, if only because I refuse to believe that the genius of the line, “You look like Don Johnson f*cked Zack Morris” could come from anywhere but the warped, demented mind of Adam Devine. The only truly scripted moment that is as shocking as the premise sets up is Kumail Nanjiani’s performance as an erotic masseuse. It is a shocking and raunchy scene that implies what the rest of the film could have been if someone had just committed to a direction.

That being said, it really does try to put a unique spin on things, even when it is using the worst-of-the-worst of stereotypes. I realized how hard it was trying late in the film, when the quartet needs a montage in order to save the wedding. It starts out cliché enough to the point I rolled my eyes in the theater, but then Plaza and Devine throw themselves into acts of physical comedy that give the scene a unique spin. Sure, the montage is set to I Believe In a Thing Called Love, but that makes it all the more fascinating. Did they pick the song because it’s about love, which seems really on-the-nose, or did they pick it because it’s a weird combination of hard rock and glam metal that only one of these freaks we’re rooting for could possibly like? It’s more than likely the former, but I hold out hope it’s the latter. Call me an optimist.

So how do I judge a movie like this? Do I reward it for what it was going for, or what it actually accomplished. I’m not sure if I can ever really answer that question. So I will answer other questions in the hopes it will distract from my shortcomings. Are the four leads great in their roles? Yes, I would say so. Is what they were reaching for interesting, even if it was outside their grasp? Sure, I guess. Will I ever see this movie again? I plan on seeing this film one more time, with my own brother, as a rite of passage, and then never seeing this movie again. Based on my supplemental questions, I have to come to the conclusion that Mike and Dave Need Wedding Dates is an interestingly average film-not without its merits, but definitely too flawed to give a wholehearted endorsement to. I guess it comes down to this: can I really give a bad grade to a movie I just wrote 1700 words about?