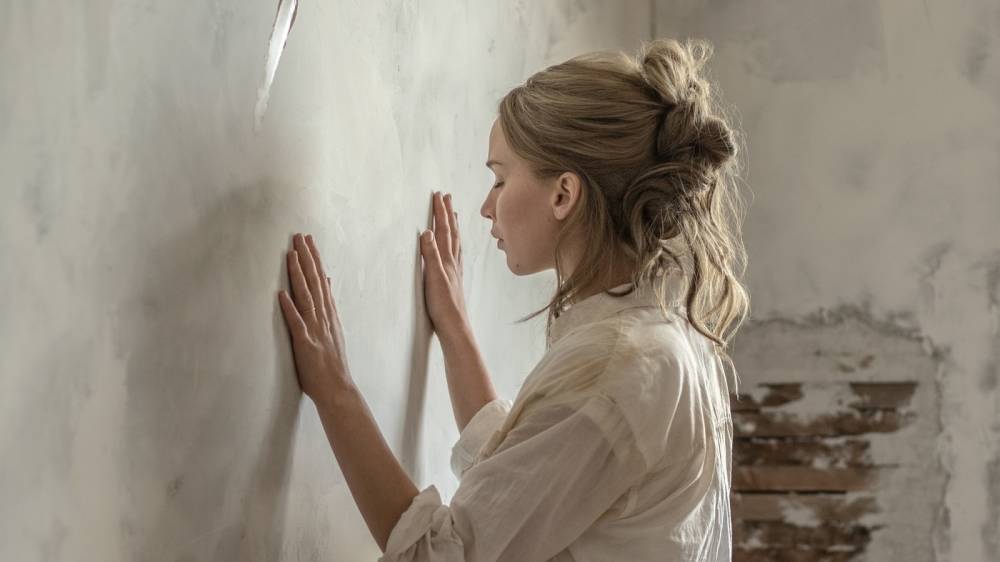 DISCLAIMER: In the following review, I try to make sense of the film mother! This is a film that is both impossible to spoil, and yet knowing anything feels like a spoiler in and of itself. While I will be incredibly careful about what I say, know that reading this will impact your viewing of the movie

I’m not sure I’ve ever seen a film like mother! I’m not sure I ever wanted to, and having seen it, I’m not sure I enjoyed it. Darren Aronofsky has made a film that would make Stanley Kubrick and Ingmar Bergman proud, but makes the rest of us feel queasy, uneasy, and miserable. I’m not sure how to even review this movie. Unlike The Shining or Rosemary’s Baby, this horror movie won’t be reinterpreted and reimagined a few years down the road. This is a movie that will take at least fifty years to dissect and study to decide if it is an absolute masterpiece or an absolute disaster. I’m not even sure I can review it, let alone if I’m qualified to. However, it’s a film that really resonated with me on a psychological level, and despite the fact I want it out of my head as soon as possible, I don’t think I’ll be able to stop thinking about it for quite a while.

The characters in mother! remain nameless throughout, with Jennifer Lawrence referred to in the credits as “mother” and Javier Bardem credited as “Him.” Him is a famous author, and mother is his second wife after a horrible fire left him widowed and homeless. mother has taken it upon herself to redesign the entire house for him while he struggles with writer’s block. One day, a mysterious Man (Ed Harris) shows up at their door, praising Him and his work. Much to mother’s chagrin, he is invited to stay in their house. Soon his wife (Michelle Pfeiffer) shows up, and the two begin living there. And then the couple’s two boys (Domhnall and Brian Gleeson) shows up on their doorstep, making mother feel more and more claustrophobic. And then things really go off the rails.

I honestly don’t know where to begin with this film. That shift I mentioned above is one of the most jarring, yet brilliant in film history. The first and second half of this film are so inherently different in nature (the first is a quiet, restrained, subtle look at claustrophobic horror, the second is a gonzo schlockfest like the Italian directors of old), and yet you can feel how they connect and flow from one part to the next. Aronofsky has staged this film brilliantly, borrowing from the greatest of directors, from Kubrick and Bergman to the works of Luis Buñuel, who used psychedelic ideas edited bizarrely to tell stories about humans, their nature, and their relationship with the world around them. This is classical filmmaking at its finest, designed to invoke, provoke, and outrage, hoping to tell a story we haven’t (or perhaps we have) seen before in a way we haven’t seen before.

There really isn’t a story or dialogue or a plot to this film. There are only themes, and lots of them. This is a film that will take people decades to fully unfurl. That’s not to say that it’s difficult to understand, by any means. In fact, everything here is pretty blunt in the best (and worst) possible ways. However, there’s just so much packed into this two hour film, it’s impossible to know how many references, hints, and more were squeezed into each and every frame. I guess I’ll start with the lesser of the two themes and discuss the analysis of the ways that men abuse women. Poor Jennifer Lawrence is put through the ringer in this movie, and all because she is what would be the lesser character in any other film: the “trophy” wife. Aronofsky really milks the horror and violence out of the most slight or subtle of sexist behaviors. We constantly see Him interrupt, belittle, and contradict mother at every turn, often answering for her when she’s asked a question, ignoring her when she raises complaints, and even lying about and to her at every turn about their behaviors. Everything she says is wrong to him, and she should feel wrong for saying/thinking it. It’s a sharp critique of the way men treat their wives or girlfriends, whether unintentionally due to the patriarchy or intentionally due to abusive behavior. In this way, the film is almost like the sexism equivalent of this February’s Get Out, which mined microaggressions and subtle racism for the purposes of horror. Hell, even the credits imply the subtle sexism the film is condemning – mother gets a lowercase “m” while Him gets an uppercase “H” (there’s other reasons for this that you can figure out for yourself, but it’s pretty much implied further below). It’s little decisions like these that add to the film’s charm and discomfort.

DISCLAIMER: Once again, this is your final chance to turn back. What follows is wonderful to read after you’ve seen the film, but it also deals with my analysis of the film’s major themes. Ok, your call

However, I’ll be honest with you, that won’t be the idea you pick up on in first viewing. It’s far too subtle when compared to the rampant themes we see present elsewhere. Let me describe that plot synopsis again, only this time, I’ll lay it on really thick. Ok, so there’s this creative guy, who invites a Man and a Woman to share his house. They have two sons who always fight. Soon, that Man and Woman multiply into friends and family, and eventually, they run rampant at the will of the creative guy. Does this sound like a simplification of anything to you? Yes, this film is a religious allegory; and it’s a helluva detailed one at that. It’s a story that can be picked at in all its glory for years to come, thanks to the way the story works on three levels: a literal level, a symbolic level, and a metaphorical level. If you interpret everything you see simply in a realistic setting, it is a critique of the way most humans interpret life. We praise men for being “creative” because they’ve made an exceptionally smart book, or poem, or painting, or movie (I’m sure some of this is Aronofsky critiquing himself) while women are the ones who actually create. We men certainly aren’t creating life inside ourselves for nine months. On a metaphorical level, the film is a critique of the way that men tend to develop God complex. Any time a man has done something exceptionally well, or created something remarkable, they tend to think of themselves as a God. This time, we watch a man literally think He is God. We see him create a pseudo-religion, listening the people who show up at his door saying things like “It’s like you wrote it for me,” and replying with “Of course I did,” and eventually hear him say pretentious things like “I am I,” a paraphrase of the Book of Exodus. However, at its core, this is a symbolic movie. Symbolically, these figures are who they seem to be. That would make Him God, and her Mother Earth. With this interpretation, we watch as he allows humanity to run rampant and abuse the Earth in a horrific display of our own nature. It’s a film that wonders why God would allow us to have free will if that free will only encourages to destroy the only beautiful thing He (or we) have ever had). It’s heavy, bizarre, and deep stuff, and while Aronofsky never adds to the conversation, or says anything of any substance, it’s certainly interesting watching him explore it.

Thematically, the film can vary from brilliant to on-the-nose to waaaaayyyyyyyy too much, but the one thing that stays consistent is Aronofsky’s direction. There’s few directors working today who have this level of Kubrickian/Polanski-esque handle over their production. This film is flawlessly edited, creating a cyclical, fever-dream like world. It works with the film’s script to combine its religious allegory with a haunting realization of Nietzsche’s Eternal Recurrence. The cinematography is gorgeous, burning brightly on film as it follows Lawrence around constantly, never letting her out of its sight for the entirety of the two-hour running time, forcing us to follow and empathize with her as she suffers grueling assault after grueling assault. And then there’s the sound mixing. Aronofsky has chosen to go without a score her, allowing each clatter, creak, and scream to ring through the theater like some sort of terrifying ghost. It creates a haunting sound design that will leave the viewer chilled throughout. Regardless of whether you like the film or not, I dare anyone to come out criticizing the craftsmanship.

Acting-wise, I don’t know how much I can really report. Lawrence is phenomenal as usual in her most physical performance to date. Bardem is fine, really only shining in the last moments of the film (he’s kind of telephoning in the self-important, creepy type for the first two-thirds). I kind of wish Ed Harris had more to do – he’s a national treasure and he deserves to be in everything. And if there’s a star outside of Lawrence, it’s Pfeiffer, who hams it up throughout with her twisty, creepy, cringy lines, seeming sinister and seductive at the same time, never feeling 59 in the slightest. Outside of the main four, the Gleeson brothers are fine for their limited amount of screentime. Oh, yeah, and Kristen Wiig shows up in this movie for a few minutes. She does her usual Kristen Wiig thing, and then has a creepy scene near the end. I liked her in the role, but it felt too “stunt-casty” for me to properly enjoy.

mother! is going to polarize people. It’s a chilling, bizarre film that American directors don’t make anymore. I already heard two fifty-year-olds complain about it and declare that it will “kill the career of everyone in it;” however, they talked through the whole movie and their opinions are useless. It’s a film that deserves repeat viewings in order to soak up every detail that Aronofsky’s trying to squeeze in, even if the overall message is fairly elementary. I guess all I can tell you is that I liked it. I’m not sure if I’d see it again, but it is an astonishing work of art, and I liked it. And if that endorsement speaks to you, then you may as well give it a shot. Just know that you will walk out feeling queasy, and I’m not sure that feeling ever goes away.