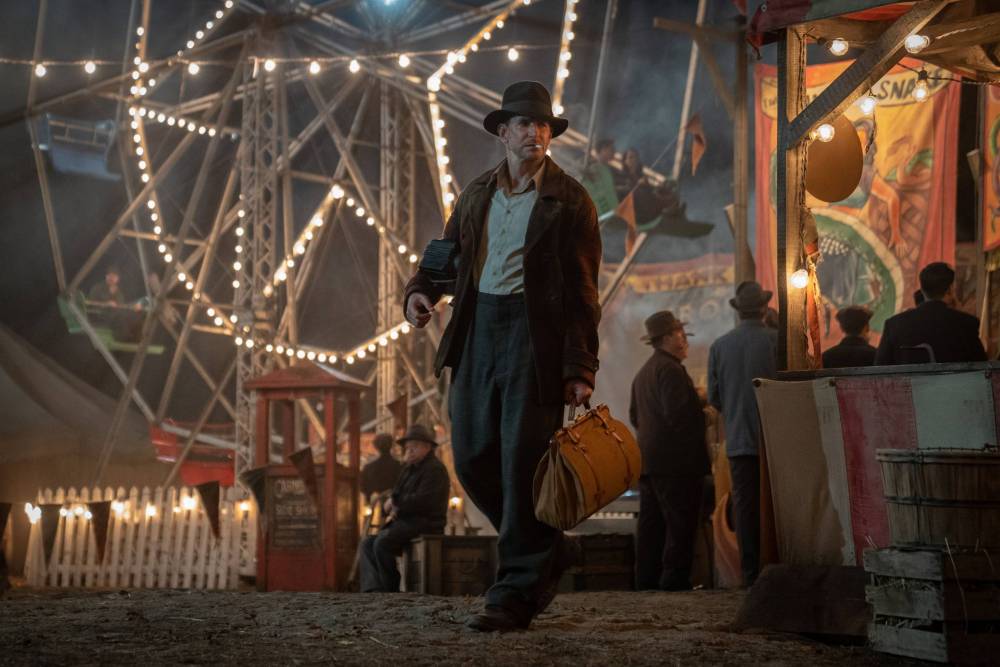 Say what you will about Guillermo del Toro, his films are aesthetically unlike anything you’ll ever see. Fresh off his Oscar win for The Shape of Water, del Toro turns his fantastical gaze to the classic 40s noir Nightmare Alley, an infamously dark and dizzying tale of greed, egotism, abuse, and death. It’s an interesting turn in del Toro’s career, which has mostly focused on fantasy and Gothic horror up to this point. And yet, he’s still the same filmmaker we know and love. So while Nightmare Alley may buckle under the weight of its story, you can’t deny that it’s a terrifyingly gorgeous ride along the way.

In 1939, drifter Stanton Carlisle (Bradley Cooper) wanders his way into Bruno’s Traveling Carnival, hoping to escape his past. He’s taken in by the eclectic carnies, including strong man Bruno (Ron Perlman), the Electric Girl Molly (Rooney Mara), the clairvoyant married couple Zeena (Toni Collette) and Pete (David Strathairn), and the geek show operator Clem (Willem Dafoe). Stanton learns the art of the con from his newfound friends, and shortly after falling in love and eloping with Molly, takes off on his own to make it as a mentalist. Stan’s ability to bullsh*t makes him a star, and puts him on the map of a gorgeous and corrupt psychologist, Lilith Ritter (Cate Blanchett). Ritter has a proposition for Stan: she’ll provide him with the backgrounds on major political and financial figures, and he’ll help them “communicate” with their deceased loved ones. It’s a surefire con, until Stan finds himself approached by the powerful and mysterious Ezra Grindle (Richard Jenkins), whose stories of grief and violence may topple Stan’s house of cards.

The first thing one notices watching Nightmare Alley is that this film is just unfiltered Del Toro, in both good ways (which we’ll get to shortly) and bad. In terms of the latter, Nightmare Alley’s issues mostly lay with its unwieldy length. Alley’s story is ultimately a simple one: it’s a classic rise and fall story where we watch a flawed but sympathetic man rise to greatness, become corrupted by his own hubris, and then watch as his ego rips him apart until he’s ruined. You’re in, you’re out, the end. Del Toro, unable to cut any of his lavish images or subplots, takes what could have been a two-hour film (or even an hour and a half) and runs with it as far as you’re willing to go. Oh, you’ll never tire of it – he’s too clever a writer and director for that. But you will feel the film buckle under the weight of its own runtime.

And what’s worse, you can actually tell which scenes can or should be cut while you’re watching. There are extended scenes that tell us lessons we’ve already learned thrice before, long (but well-acted) monologues explaining the ins and outs of the cons, and so on. Sure, all this is helpful, and it’s shot gorgeously, but…we can figure most of this out for ourselves, yes? And it certainly doesn’t help that most of these added and padded sequences come in the film’s first half, which functions almost as a prologue. There’s nothing more frightening than looking at your watch thinking, “This is just about done, right?” and learning you’ve still got an hour and a half to go. It’s also worth noting that despite being based on a noir, shot as a noir, and billed as a noir, there’s very little noir to be found until late in the second act, when Cooper and Blanchett started exchanging sexy banter. It’s not that del Toro hasn’t crafted an interesting film. It’s just that if one is promised a Guillermo del Toro film noir, one would like to receive a Guillermo del Toro film noir.

And yet, these length issues only register as a slight nuisance in the film’s overall tapestry. Why? Because Guillermo del Toro knows how to create a f*cking ambiance. Honestly, you should probably be sold on the logline alone: “Guillermo del Toro makes a Gothic horror about 1930s carnies.” But just in case you aren’t, I’ll add this: whatever you’re imagining based on that descriptor, the final product is ten times better. Del Toro isn’t afraid to get weird with his world, filled with creepy funhouses, decapitated and devoured chickens, hot 30s breakfasts, rainy backdrops, random guitars, freaks and weirdos everywhere, and beyond. And I haven’t gotten into the really weird stuff, like jars of deformed babies and creepy ethereal figures in a symmetrical hedge maze. Del Toro is interested in these details because they underline the film’s message: the reason why freak shows were so successful in the 30s (they made poor people feel better during the Depression), and the state of a nation that requires tricks and lies and cruelty in order to survive. It all leads up to a fog and smoke-soaked finale so luscious to look at, you’ll just be on the edge of your seat muttering “Yes…yes…” to yourself over and over.

It’s also worth noting that del Toro’s production team has, unsurprisingly, crafted a top-notch aesthetic for the film as a whole. The sets, ranging from carnival tents and funhouses to lavish ballrooms and Gothic mansions, are each sublime in their own creepy, unnerving way. Tamara Deverell’s work here is truly miraculous, and my only criticism is that Dan Laustsen’s cinematography doesn’t do it justice. It’s not bad camera work, per se, it just doesn’t live up to either the sets or the genre. But I can’t be too harsh – that camera is our lens into this world, from the sublime sound design to the costume work (yes, the gowns are gorgeous, but I’m more focused on Bradley Cooper’s little carnival barker hat, which made me squeal in the theater). And the editing is a marvelous, slick throwback in its own right. It is somehow both classical, in its fades and wipes and similar 1940s techniques, and modern, in its tongue-in-cheek nature (there’s a terrific cut from the beginnings of a sultry affair to the strong man’s labored rhythmic grunting that’s just…perfect). Each detail is executed to perfection, to the point that you’ll forget the homages to Freaks and just focus on what del Toro and company will do next.

In terms of the performances, it is hard to describe any of the work in the film as anything other than “interesting.” Cooper, for example, known for his motormouth assh*lery in film, is silent for almost the first hour of the film, before being incapable of shutting up. Cooper brings to the role of Stan a personification of the great George Costanza quote “It’s not a lie…if you believe it,” and while the actor doesn’t quite bring the charisma a role like Stan requires, his final scene is more than worth the actor’s casting. Blanchett, meanwhile, makes for a stunning femme fatale, and she commands the screen from her first appearance (again, almost an hour and a half into the film). However, if there’s anyone who outshines Cooper and Blanchett, it’s Rooney Mara. Honestly, this may very well be Mara’s film. She brings a heart and soul and pathos that justified the bleakness that surrounds her – not to mention that the camera just loves her, like an old-fashioned movie star. In fact, I’d go as far as to say that the film’s final act, when Mara begins to take a backseat to Blanchett, suffers because of her absence.

The rest of the massive cast mostly amounts to minor roles and cameos, but they all bring their A-game. David Strathairn plays a fantastically and tragically drunk magician, while Toni Collette is enchanting as a fortune teller. Ron Perlman is just smart casting as a circus strongman.  Willem Dafoe essentially amounts to a cameo, but he delivers one monologue early in the film that is not only perfectly delivered and definitive of his talents, but also accurately sums up the themes of the film. I wish Richard Jenkins had more to do as the troubled millionaire who brings Stan into his employment, but at least he makes the most of his material. And while the duo appear only in the form of a cameo, an argument could be made that Mary Steenbergen and Tim Blake Nelson steal the film in their approximately five minutes of screen time (and that’s combined). It’s a good cast mostly hired to accentuate the visuals.

Nightmare Alley is the perfect distillation of everything Guillermo del Toro both succeeds and fails with. There is such a fascination with the visuals and world-building, del Toro can’t help but put the story and pacing on the backburner. But then again, when you’ve got a film that looks this good, and can evoke such a visceral reaction to its aesthetic, can you blame the guy for his wandering eye? It’s not the film noir revival we all hoped for, but it is a fascinating enough vision to immerse the audience for two and a half hours. And at the end of the day, isn’t that what we all want?